Allegations & Bonds for the Wakefield area.

A couple were to be married but wished to dispense with the proclomation of the banns on the 3 successive Sundays prior to their wedding.  The church would issue a licence to marry, waving the banns but the couple would have to do a little paperwork. 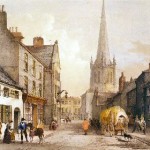 The Allegation or affidavit was a formal statement by the couple about their ages, marital status , residence.  To this affidavit was added an oath stating that there was no ‘formal impediment’ or reason why the marriage should not take place.

The Bond, worn by two ‘sufficient witnesses’  – one normally being the grom, his father or a close friend, pledge to forfeit a large sum of money if there was any untruths being declared.  The bond was not to be laughed at as it could be any sum between £40 and £200.  This sum was set to prove that this was not a light-hearted matter that the couple were intending to go ahead with.

Who took out Bonds & Allegations to avoid marrying by banns or in the local church – well, an Overseer of the poor, could pay for a licence and marry off one of the pregnant young girls in the poorhouse before she gave birth.  Or, Mr Jones may wish to have his daughter married to her boyfriend, very quickly – thus trying to avoid any local scandal when the child came before the wedding.  Or, people of standing, of note and the grand of the area who wished to marry in a private house or chapel.  So as you can see the full social spectrum is covered.

But after all that, it does not mean that the couple actually ‘tied the knot’.

The transcript can be found by clicking here