Most of my family and friends know I can spot a war memorial or a CWGC headstone at a great distance.  My family make a joke out of the fact that if I want to go anywhere there has to be an ulterior motive i.e. a memorial of some kind.

Holidays and weekends away have always been expeditions where viewing the countryside was secondary! 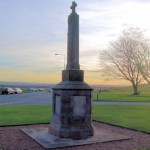 On one of our annual trips to Aberfoyle we found a very nice little memorial in Gullane – a nice place on the Edinburgh to North Berwick road (A918).

The memorial to those who died in WW1 & 2 is situated on a grassy section near the golf course.

Back home I started the transcription and followed up with looking to see who these young men were.  There were 3 young men who stood out.  Firstly, James Harper who died in the local police station and rests in the village kirkyard.  Secondly, Hugh Burns who died while in a prisoner of war camp and his service records hold correspondence from his father asking why there is a discrepancy in his date of death.  Thirdly, and the most interesting to a family historian or researcher is the entry on the memorial for Richard H Whitecross.

Richard served in the Australian forces and whose army life was not to say the least – interesting! If you have Australian or Canadian service men who served in WW1 then you will find that their army service records are intact.  The records for UK service men are not so good.  They form part of the Burnt Records as they were damaged by fire in WW2. Saying that the Medal Record Cards are good but their information is limited.

Anyway, back to Richard – he left his home in Gullane for Australia where he went to work as a bricklayer.  His papers tell of his enlistment, give a description, and more to the point tell us where he served and what his attitude was to service life.  Well I can tell you that he was not the most enthusiastic squaddy.  Richard was always on report, failing to turn up for Roll Call, being drunk, AWOL and more.

To look for an Australian soldier from WW1 click here