Before I start this entry for Iron Bridge War Memorial I must just mention this in the hope that some people can make arrangements to visit the event listed below :-

Heroic Spitfire Veterans to Attend 75th Anniversary Event on 5th March 2011 at the RAF Museum, Cosford – to read more click here and scroll down to Latest News. At the event will be a number of Spitfire pilots including Margaret Frost, female pilot.  Margaret being one of only 15 women and 100 men to have a Special Merit Award for their service in the ATA flying replacement fighters to RAF bases during WW2. 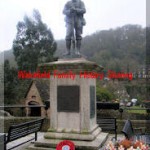 Now back to Iron Bridge Memorial, but firstly a little bit about the bridge that the war memorial stands so close to.

Abraham Darby III in the late 1770’s was an ironmaster working at Coalbrookdale and was commissioned to cast and build a bridge to cross the gorge.  The bridge was opened in 1781 and today still remains a magnificent sample of how Britain was at the forefront of pioneering the way forward.  The gorge over which the bridge spans is a UNESCO World Heritage Site, with the bridge being Grade I listed and a Scheduled Ancient Monument – now isn’t that something for Abraham and his family to be proud of ?

The War Memorial to the men of Ironbridge stands proudly within feet of the bridge and visitors walking over the bridge will pass the memorial.  The soldier atop the memorial plinth stands with his back to the gorge, at ease, resting his hands on the  his rifle as he seems to be waiting, looking for his friends from Ironbridge to come into view and come home once more.

So, who is our soldier waiting for ?  John Wlliam Adams who died of wounds ; Cecil Davies, KIA ; Frederick ; Drewball ; William Onions, KIA ; John Steventon, KIA to name a few.