Tonight is census night and whoever is in your house tonight should be on your census form.  This decades census asks different questions to those in previous times and is based more on social and cultural subjects.  Some, sorry, many family historians question the use of this census in 100 years time.  Basic information is being left out, for example it is not asking for a middle name, yet this is now we distinguish a John Smith from a John W Smith.  Where were we born, again another question that could distinguish our John Smith from the other.  But who are we to argue ?

Yesterday I was thinking, I do that sometimes, about the 1911 census and wondered if I could find two people with the same name, born in the same year with two totally differing backgrounds and lifestyles.  I chose a family from one of my war memorial transcriptions but could not find the family on the 1911 census – foiled again! So this morning with a new vigour, 2 monitors (making life easier) and using the pc not the laptop I started my quest for these two people.  Who would they be, how old would they be and what would their every day life be like.  My challenge is on and a cuppa is called for.  Cuppa by my side and here we go !

Who are these young men? What name did I decide upon? How old are they? Questions hopefully we will all find the answers too.

Firstly, John Douglas Henderson Radcliffe was born in 1886, the summer of 1886 to Alexander Nelson Radcliffe and his wife Isabel Grace nee Henderson, whom he had married in the late spring of 1884 in Kensington.  Alexander was a solicitor and in the 1911 census he was living with his wife, 4 children, 2 visitors (Noel Burn Rosher b1876 Consulting Engineer born in Higham and Percy Otto St Clair Wilbraham Perryman b 1886 , Asst Dist Commt Uganda born Redhill) and 7 servants (incl cook, nurse, kitchen maid and house maid + butler and footman) all residing on the night of the census at 45 Kensington Square – in total 15 people in 20 rooms. 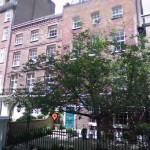 John Douglas Henderson Radcliffe had been a pupil at Eton College, leaving by 1904 and going on to Balliol, Oxford where he was known for his satirical humour and sense of fairness.  He rowed in the Eight and was Captain of the Boat Club and according to sources was a first rate coach and gave up his spare time to ‘the river’, being devoted to his College – Balliol. In 1911 he was elected was a Fellow of All Souls College and delighted in the traditions and atmosphere.

After Oxford he joined his father as a solicitor but it was politics that was his goal.  In 1913 he married Mary Augusta  Garlinda Bolitho and only too shortly after The Great War broke out.   John joined the KRRC, serving as a Captain. In July of 1915 there was desperate fighting near Hooge.  John  was KIA on 30 July 1915 aged 30 when the enemy over ran the trench held by Capt., Radcliffe and his men. John  is remembered on the Menin Gate Memorial, Ypres.  John had been living with Mary at 20 Craven Street, Charing Cross and he left over £1,500 pounds to her on his death.

So ended John’s life, a life of privilege and opportunities.  A life lived in Eton, Oxford and London.  Would he, had he had the chance, been able to influence the politics post war? Who knows, but one thing is certain, he left a small piece of himself with all whom he met and was certainly fondly remembered and loved.

Now, which John Radcliffe born in the same year, well we find him in Leeds, the son of John William and his wife Mary Ann.  One of 3 surviving children out of 8, John was also born in 1886 and in 1911 living at 36 Wellclose View, Leeds.  John W was a 61 year old Organ Builder born in Bolton and his wife was also 61 and hailed from Leeds. John jnr was aged 25 and a Textile Printers Foreign Correspondent and his sister Lilian aged 31 was a Co-op Stores Cash Clerk – 4 people living in 5 rooms. 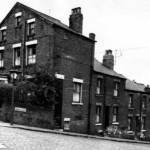 The houses around Wellclose View were terraced, more than likely on a hill.  The terrace ends, those facing the next street had bay windows and attics with full  windows making use of the roof space.  The doors were straight onto the cobbled streets  and most of the houses had usable cellars.

Did our 2nd John fight in WW1, I don’t know.  I’ve looked on SWDTGW, Medal Cards, CWGC and Army Pension records and there is not one John Radcliffe that gives a clue to him being our John.  Let’s hope if he did go to foreign shores, he at least came home to his family.

Did John marry ? There is a marriage for  John Radcliffe in Leeds in the June ¼ of 1912, could this be him ? And there are no deaths that stand out any more than others.

I think it goes to show that if you fit into any of the following categories :- The Great, The Good or The Bad you are recorded very well in historical documents.  But, if like John, and his family, you went about your business, sometimes with a little to spare at the end of the week and others the week was longer than the money, records are limited.

If anyone knows of John Radcliffe of Leeds, please let me know I’d like to know what happened to him.