When we visited Dunbarton  a quick drive round the area only found the Dunbarton Memorial to those who died in the South African Campaign.  Well, it was an easy find as it was just outside the Town Hall, but I did have to get out of the car and do an ‘Anneka Rice’ impression before I found out it was not exactly what I was looking for, but a bonus.

After going inside the Town Hall and enquiring I eventually had directions to the memorial, but I must add the directions were not all that good!.  In the end I saidto my long suffering husband ‘just park the car and I’ll find it’ .

You would be surprised how many people use a park every day, walk past a large lump of stone with wrought iron fencing and don’t even know what it is – well, after having my website for over 12 years and doing the memorial transcriptions for about 8 or 9, I am not surprised, I am ashamed. 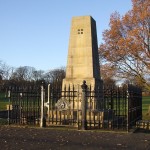 So starting with the South African Campaign Memorial, who is there ?

Now to the WW1 & 2 memorial.  This wonderful piece of stone stands in Lenongrove Park – close by the path that runs along the Clyde.  Although, this memorial and the South African Campaign memorial are not on my website yet, I thought I would give you a little of glimpse of what it to come……….soon!

For starters, I thought I would let you know about Pte Robert Mustarde – he served as Pte 202169.  Robert was born in Kirkintilloch and enlisted in Stirling, joining the HLI.  He is recorded as dying on 14 April 1917 at sea and is remembered on the Mikra Memorial, Greece.  Robert is more than likely 1 of over 5oo nurses, officers and men who were lost on transports and hospital ships in the Mediteranian.  Many were washed ashore, identified and buried in Thessalonika, others like Richard were not so lucky and a name on a memorial is there only memorial.

William Yuille, son of John and Catherine of 1 Beechwood Terrace, Dunbarton is also on the memorial.  He served s 43314 in the Royal Engineers.  He was born in Dunbarton, also enlisting in the town.  He was KIA on 7 December 1916 and rests in Bancourt British Cemetery near Bapaume.

Basil Withy, the son of Henry and Mary Forrest Withy of Brantford House, West Hartlepool. Henry was in the 1901 census listed as being a shipbuilder, by 1911 he is a widower and retired.  But on those census I can find no mention of Basil who was born in 1886 in Hartlepool – where was he?   Basil  served as a Lieutenant in The King’s ( Liverpool Regiment).  He Died of Wounds on 2 July 1916 and  rests in La Neuville British Cemetery, Corbie.  Henry, his father was granted Probate at Durham on 6 September with Basil’s effects adding up to £5049 15s 1d.     Note – there is an Ernest, son of Henry and Mary who is of a similar age, could this be Basil who is known to the family by a differant name……….does anyone know any different?

Just a few names and information to be going on with along with an image of the memorial and I could not let this posting go without leaving you with this view from just along the  path. 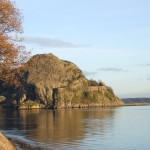