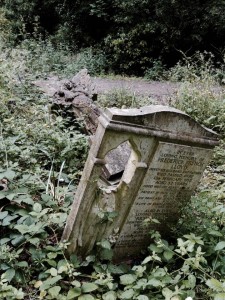 Ooops, I’ve done it again! But I have done a lot on my project this weekend, so thinking I need a diversion.  I have had a couple of diversions lately, namely the headstone from East Ardsley churchyard, the newspaper article, and now I have another – a photograph of a headstone.

He is Frederick French Lloyd and his tilting and damaged headstone in Nunhead cemetery, still retains some dignity.

‘In every loving memory of FREDERICK FRENCH LLOYD, devoted husband and father, who passed away 13th February 1953, aged 52 years.  “Good was his heart and in friendship sound.  Patient in pain and loved by all around.  His pains are o’er, his griefs forever done, A life f everlasting joy he’s now begun. Also in ever loving memory of RICHARD LLOYD, devoted **** and  *****, who passed away 27th April 1953’

The remainder of the headstone is covered by undergrowth but you can see part of another sentiment.

What relationship does Frederick and Richard have? Are they father and son, brothers or cousins?

Frederick French Lloyd was the son of Robert Horatio Lloyd and Emily  nee Groombridge, who he married in the late summer of 1872, in the St Saviours Registration District of London and was one of nine children:- Susan, Annie, Margaret, Elizabeth, Harriet, Maude, Richard, Albert and Frederick – born between 1870  and 1901.  At the time of Frederick’s birth, the family were living at 110 Brandon Road, Newington.  Robert was employed as a Fish Porter, Susan and Margaret were ‘mother’s helpers’ and 19 year old Annie, she, ironed collars to add to the family coffers.

It was ten years later in 1911. that the family, now consisting of six people, lived at 1 Eltham Street, Walworth, London – a six roomed house.  Robert was now classed as a General Dealer. Emily, who had been married to Robert for 36 years had given birth to 13 children with 10 surviving to the 1911 census.  Susan, now ironed collars, Maud Pearl was an Ironer, Albert was a Printer’s Assistant, while Frederick was still at school 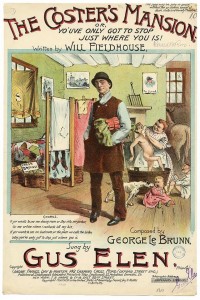 “1899 Gus Ellen” by Kbthompson – The Theatre Museum (London). Licensed under PD-US via Wikipedia –

Frederick left school and started working ‘on the markets’, as a Costermonger – a street seller of fruit and vegetables. In 1920 he was living with his parents, still at 1 Eltham Street with his parents, according to the Electoral Registers.

He married Hannah Tobin in the March quarter of 1924 in the Southwark Registration District and they went on to have five children.  In 1939, 1 Eltham Street is still home, but Frederick seems to be the head of the household, with his wife, Hannah also still living there as is Robert Horatio, but no Emily, as she had died in 1933 aged 77.

I think this now answers the question asked about the relationship between Richard and Frederick, they were brothers.  We know where they rest but where is Hannah ……….oh no! is that another question to answer?