I recently attended  one of my regular family history meetings.  Off I toddled and up on arrival set up my help desk and grabbed a cuppa.  I could not remember who the speaker was but when I heard his name, I knew I was in for an interesting morning.

The talk was a follow-on from one he gave a few years ago, when he then spoke about the background to conscientious objectors, this talk was to give an insight as to why there were hot-spots of CO’s, where they were and highlight the outcome of a few men.  Since his last talk a great deal of work had gone into determining the number of CO’s to the population of men aged between 18 and the early 40 mark, who would have been eligible for conscription. Huddersfield was one of these hot-spots, as was Letchworth Garden City, Nelson and Rawtenstall.  My ears pricked up and my eyes opened very wide when a grid with a few local places was shown on the screen.  This grid included Huddersfield, Wakefield and Ardsley (East and West).  The town of Huddersfield had been highlighted as having a good number of CO’s, but Wakefield, now that was a surprise, only one – I need to find out who he is!  But what was a shock, surprise is not good enough for what I was to learn – East and West Ardsley had six Conscientious Objectors. The shock was, that for the population of Wakefield compared to the Ardsley villages, why more than Wakefield?

After the talk,  there was the usual ‘any questions’.  I posed one, as did others, and was invited to   have a chat with the speaker after the meeting.  I mentioned I had a connection to the Wheeldon family – Alice Wheeldon, had a son William who was a CO, but that story would have to wait. I also mentioned I was curious about the six, who were they?  Where did they live? And why were they Conscientious Objectors? After a look through his database of over 17,000 CO’s found so far, I had their names!

These men and others had their reasons for not wanting to fight, be it religious, political or some other reason.  So, when 1916 came along and brought conscription with it, these men, like many others, chose not to go to the enlistment centre.  The men would ignore the call and stay at home awaiting the police to arrest them.  Or, they would ‘go on holiday’ as it were and tour rural places either camping or staying in safe houses.

The Clay brothers – Sons of Albert Clay and Rachel (nee Rogerson).  Albert and Rachel were married in St Mary’s Church, Woodkirk on the 12th of June 1886 after Banns had been read in there and St Michael’s, East Ardsley.  Albert was aged 24 a labourer from East Ardsley, the son of Henry, a shoemaker, while Rachel, aged 21, from Woodkirk, the daughter of Samuel, a joiner.  Albert signed his name, while Rachel made her mark.  Witnesses to the union were Emma Clay and Horatio Thackerah, who also made his mark!

By 1891, the couple were living on Bromley Street, Soothill and now had two children, Ernest aged 3 and his brother Hubert who was just one.

The census of 1901 came around, the family were now living at Lawns Terrace and all the boys were there, including young Albert who was 10 months old and Isaac. Albert senior, has his brother Isaac living with them.  Another ten years down the line and the family are living on Grand View, East Ardsley.  Albert and Rachel have now been married 24 years and had 6 children – with the four boys we know of surviving to the census.

By 1911 they were all at Grand View, East Ardsley – Albert and Rachel had been married 24 years, had six children and four had lived to be included in the census. Ernest worked as a textile operative, cloth washer; Hubert and Arthur were pit bank labourers and Albert was at school.

Arthur Leathley – he was the son of Samuel and Emily Leathley, who in 911 were living with their eight children at The Green, East Ardsley.  Samuel was working as a miner, Arthur was a brickmaker and the other boys in the family old enough to work were working at the local pit.

James Holmes,  the last of our young men, was, in 1911 had been married to Agnes for the last eight years and was the father of five year old Albert Ernest Holmes – their surviving child of two.  James was employed  by the local Co-op, as their drapery manager. 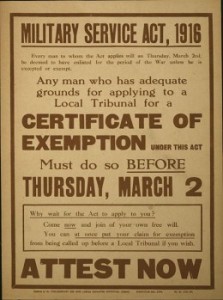 Now it looks like it’s time to make the names real! Starting with the eldest of the Clay boys, Ernest. Ernest by the time the 1911 census came around is registered as a widow and living back with his parents.  He married Edith Scott on the 11 of January 1908 at St Paul’s. Morley.  At the time of his marriage to Edith, he was working as a burler and living at 32 Melbourne Place, Morley.  His wife, 2 years his senior, was the daughter of Samuel Marshall Scott, and living at 15 Cross Street, Morley.  The witnesses being Samuel Marshall Scott and Bertha Carlton.  Edith died and was buried on the 5th of February 1910 aged 25, in St Michael’s churchyard, East Ardsley.

Like all CO’s Ernest would have received in 1916 his ‘call up’ papers.  His Attestation Papers are not to be found, probably destroyed by fire or water during WWII.  But his name is there on the Conscientious Objectors’ Register 1914-1918. His name, year of birth and address are recorded along with his marital status and occupation.    There is also a section for ‘Other CO’s in family’ – very helpful if you don’t know and they are listed in the notes section.

Ernest’s entry under the heading Court Martial, 28 September 1916, says he obtained Work of National Importance under the Pelham Committee in a coal mine but he refused to disclose where he worked. 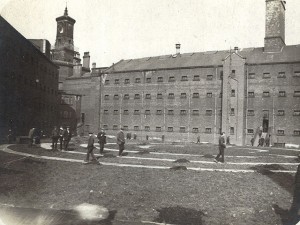 Arthur Clay, now his Attestation Papers are available, a little on the burnt side but in most cases the pages are readable, even though some of the dates seem confusing.  His form is filled in he usual way for the prospective soldiers – name and address details, occupation and age, but written across one of the sections are the words ‘Refuses to sign declaration’.  Below, in the next section it is declared that the recruit has been exempted by a Tribunal on conscientious grounds and written is the date of the Appeal Tribunal (13/3/16) in Wakefield. Arthur was appointed to the Non-Combatant Corps.  His record papers go on with handwritten notes, including names of other CO’s.  The notes tell that he was at Warwick prison, Wormwood Scrubs after being at Dartmoor Works Centre.  Further reading through the pages eventually comes up with a Regimental no., of 4685 in the N.C.C. (Non-Combatant Corps.).  There is one report where Arthur was in the Guard Room on 1st of June 1918 in Pontefract charged with ‘disobeying a lawful command given by his superior officer’, infront of four witnesses, for which he was Tried and given ‘6 months impt with H.L.’ (6months imprisonment with hard labour) on 9th of June 1918.  Arthur was ~Demobbed on 31st of March 1920 and there is a note saying what looks like he is forbidden to wear Chevrons or Wound Stripes. Like his brother, Ernest, his CO Register entry confirms what was found in his Attestation Paper.

Albert Clay, born around 1900 in the CO Register, says he was motivated by the NCF (No-Conscription Fellowship), of which he was an Associate Member. Like his brothers he would have been brought before a Committee.

Hubert comes next and his Attestation Papers are available, even though they are on some pages a little bit pale and hard to read, like his brothers.  Hubert refused to sign and the entry before a Tribunal in Ardsley, on 25 March 1916, says he was exempt from combatant service but given the Regimental number 1685 and the rank of Private. in June of 1916 he was in guard detention room at Richmond Castle, awaiting trial for refusing to obey an order and he was transferred to Durham Prison.  Only a few pages are available but still interesting…….now to look at the CO Register, hopefully that will tell more.

Hubert seems to have been in prison quite a lot – Pontefract, Richmond for his Court Martial in July 1916 followed by 112 days with hard labour.  Transferred to Army Reserve, quickly followed by a Court Martial at Leicester in 1917 – 2 years.  Again in Leicester and now August of 1917 he is given 1 year with hard labour.  To Wakefield Experiment (what ever that was) then to Armley Prison. In between there were Tribunals at Wormwood Scrubs.

James Holmes, born around 1880 lived at the time of his call up at 52 Gordon Street, East Ardsley.  He gave his motivation as that of being a regular preacher (minister) in the Church of Christ and  a CO therefore claimed Absolute Exemption.

Hubert refused to attend a Wakefield Magistrates summons on 30th of April 1917.  He was at Pontefract in July 1917 and given 7 days.  Later that month he was Court Martialed and given 6 months with hard labour, later ending up at Wormwood Scrubs.

Finally, Arthur Leathley, his CO Register entry is similar to the other men from East Ardsley.  He was born around 1885 and at the time of his Attestation was living at 11 Gordon Street, The Falls, East Ardsley. Even though his service papers have not survived, the COR tells us that it was 1684.

Hubert refused to sign and attended various Tribunals in East Ardsley during the early months of 1916. He was posted to the NCC at Pontefract on 6th June 1916.  Later that year he was at Richmond, Court Martialed and given 11 days.  He is later to be found in Duha Prison.  On the 1st of November 1916 he is in the Army Reserve and re-called on 6th of February 1917.  By the 22nd of the month he has gone AWOL, been re-arrested and given 168 hours detention.  Soon afterwards on the 15th of March 1917 he is again Court Martialed and given 2 years without hard labour and ends up at Leicester Prison, having been at a Central Tribunal at Wormwood Scrubs during August of 1918.

Sometime during his escapades here refused a medical,  was arrested for using the railway at Christmas, which led to him being very badly treated and also refused to obey orders.

What made these men feel the way they did and take the actions they did?

According to many sources, occupations and connections to Unions, Political Social parties and some religious groups are the connections that link them together.  Many did serve alongside fighting soldiers, working as stretcher bearers, in the VAD and other voluntary capacities.  Many of these men were killed while doing non-combatant work, especially those who were stretcher bearers, as they had to go into the battle and retrieve the wounded and the dying.  Some, in fact were very brave men, while not wanting to take another man’s life, they did in fact lose theirs by trying to save life of another.