While having a look through one my books I stopped at the entry for Poperinghe New Military Cemetery.  I was very surprised to read that within the walls of the cemetery lie more executed soldiers than any other Western Front Cemetery, 17 to be exact, who were Shot at Dawn.

In 2006, after many years of campaigning by the families of the soldiers, military historians and the general public, the British Government announced a group pardon for  306 of the 346 men ‘shot at dawn’.  These men, many suffering from shell-shock were tried before high ranking officers, who had probably never seen a battlefield close up. These soldiers were poorly represented and in many cases suffered miscarriages of justice.  This blanket pardon, although a positive move nearly 100 years later, pardoned those suffering but  also included those who had criminal intentions and those who willfully neglected their duty. 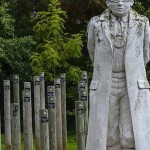 The New Zealand Government, had the previous year pardoned its executed soldiers.

National Memorial Arboretum, Alrewas, Staffordshire, DE13 7AR, is the home to  many regimental, battle and individual memorials is the memorial to those Shot at Dawn.  A very moving memorial, comprising or a post for each man.  The posts are symbolising the stake the soldiers were tied to before being shot. 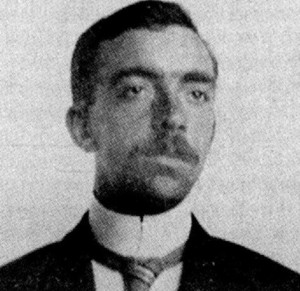 Eric Skeffington Poole – was born in Nova Scotia, Canada in 1885.   He first served in the Halifax Rifles in the first decade of 1900.  His family moved to England, settling in the Guildford area of Surrey.

By October of 1914 Eric had joined the Honourable Artillery Company, working as a driver.  He earned a commission as a  temporary second lieutenant in the West Yorkshire Regiment by 1915.  The following year he was serving in France where his regiment was due to serve in the Battle of the Somme.

Honorary Artillery Company membership book via Find My Past

Eric was, according to the National Archives First World War project. suffering from shell-shock after being hit by clods of earth following enemy shelling on the 7th of July 1916.  He was sent to recuperate and returned to his battalion by the end of August. He was soon to be in charge of C Company at Martinpuich near Albert.

, During his trial Eric described his injuries which caused him to get confused and at times  have difficulty in making decisions.  It was during one of these occasions that it is said he wondered away from his platoon while they were making their way to the front line trenches.  Eric was arrested two days later.  In  November the decision was made to try him by general court martial for deserting ‘while on active service’.

Poole was tried in the small Belgian town of Poperinghe towards the end of November.  Six witnesses were called  It was noted that Eric’s ‘nerves were rather shaken’.  While Eric himself, told that during early October he was feeling ‘damned bad’.  Two men spoke in his defence, one a Royal Army Medical Corps., officer, who told that his condition made him incapable of intentionally deserting.  Eric re-capped his conditions and told he was unaware of the seriousness of his actions.  Despite his defence pleading his case the sentence was ‘death by being shot’. 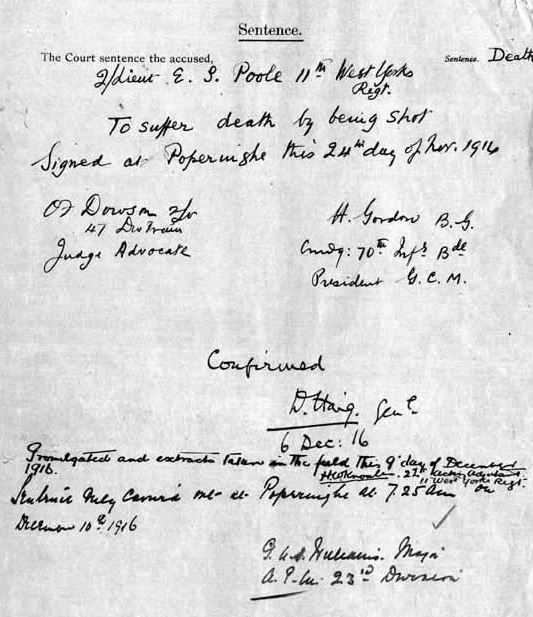 Days after a medical board was sent to report on Eric, they concluded he was of sound mind and understood the consequence of his actions.

Eric Skeffington Poole, the first British Army officer to be sentenced to death by being shot, was executed by firing squad behind Poperinghe town hall on the 10th of December, and as we know he rests in the town’s military cemetery. 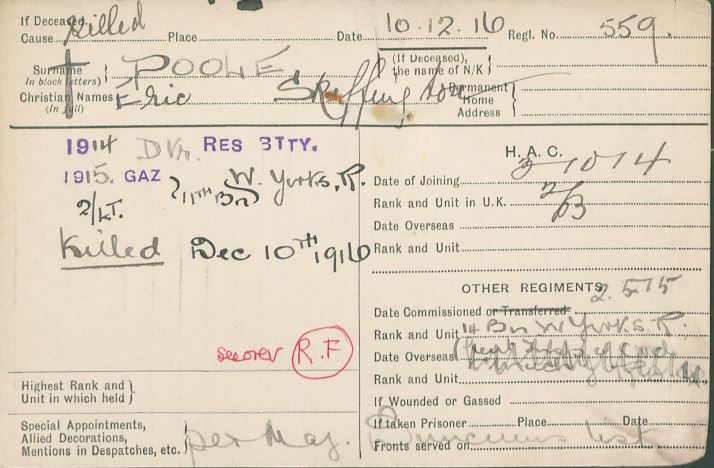 One of Eric’s service cards for the H.A.C., via Find My Past 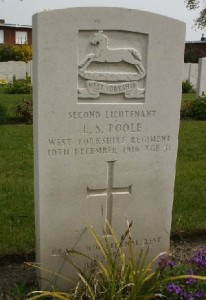 Eric’s fate was not made public back home.  His demise was not published in newspapers and his family were also anxious to avoid the word spreading.

The fate of Eric was not confined to the Commonwealth forces – France sentenced more than 600 men to death by firing squad.  Often in open spaces in view of the public and passing servicemen, thus trying to set an example to other soldiers and pointing out the fate of desertion.