Aren’t relations wonderful?  The close one, the ones you find along your family history trail and the ones you have known for a while as friends who then end up being distant family, but nevertheless family. 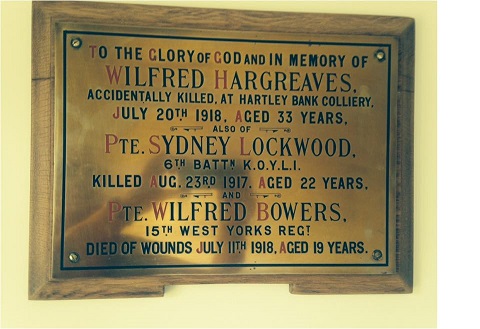 One such friend who turned out to be family through a cousin connection, has given me permission to use his picture as a basis for a blog.

It appears we know who the men were, how old they were and how they died.  But in life whose sons were they? Did they have a wife and children?  They had to love and be loved by someone.

Starting from the top, Wilfred Hargreaves, was the son of George and Martha Hargreaves who in 1901 were living at Spink Lane, Pontefract.  Wilfred was 16 years of age, being born around 1885 in Netherton.  George  earned his living as  Colliery Under Manager, while Wilfred also worked in a colliery, probably the same one as his father.  Wilfred’s elder sister, aged 19, had no occupation and probably helped run the house. Two younger siblings, born in Netherton and East Ardsley were scholars.

Ten years on, Wilfred has been married 3 years to Marion, and is the father of a one year old son, Ronald.  The family are living in Netherton, where Wilfred works as a Colliery Deputy – he seems to have gone up in the world and taking after his father.

But as we know from the memorial, life does not run smooth for the family and in 1918, aged 33, Wilfred is killed in a mining accident.  The following extract from the Wakefield Express dated 27th of June 1918 tells the story:-

An accident happened at Hartley Bank Colliery on Saturday afternoon, Wilfred Hargreaves, age 33, foreman deputy there being fatally gassed. Deceased, who was a married man, lived at Blacker Lane, Netherton. He had been nearly four years at Hartley Bank and before that had worked at Netherton Colliery.

The inquest was held at the Netherton National School on Tuesday afternoon by Mr P.P. Maitland. Among those present were Mr Charleton (His Majesty’s Inspector of Collieries) and Mr Hinchcliffe (the Hartley Bank Colliery Manager). The Reverend A.E. Hey was foreman of the jury. Only three witnesses were called, one being Miriam Hargreaves, the widow, another being Arthur Morley a deputy, who was with deceased when he was gassed and the third was Dr McLean of Horbury.

The witness, Mosley, stated that gas had been noticed in a part of the colliery the previous Friday morning and they fenced off the place that same morning. It was at the top side of the north ending, past the first gate on the topside cross-gates and the gas extended about 40 yards. The manager told them to open the door at the north end and case the sheet, which was about two yards in front of the door, which they did.

On the Saturday morning they found the gas about in the same place. Following the manager’s instructions, they went again in the afternoon, about three o’ clock when the pit was not working to do certain work in connection with the doors and sheets. To carry out those instructions they would not have had to go into the gas. They finished their work about 4.10 o’clock and then rested a quarter of an hour, waiting to see if the gas cleared off. They then went up as far as No. 2 gate by the cross-gates to see whether the gas was shifting. They found gas at the top side of No. 2 gate, testing it with their safety lamps. Hargreaves said “shall we try to remove the sheet on the topside of the cross-gate?” and witness replied that he had no objection to their having a try. Witness also said he would go first and accordingly made his way, a distance of about 30 yards to the sheet. He got hold of the sheet, but could not pull it loose for it was of several thicknesses. Finding he was getting overpowered, he moved back about three yards, with his face to the floor to get some fresh air. The road was about 3 ft. 6 ins. high and they had to move stooping. Hargreaves had come up and was then passing him. Witness told Hargreaves he was only resting half a minute and then he would have another try. Hargreaves replied “Oh I’ll have a try at it Arthur”. Hargreaves then had a try at the sheet, but failed to pull it down, and he said “my word, its strong here Arthur”. Witness remembered nothing more until he recovered consciousness and looked at his watch and found the time was 7.30. It would have been 4.25 when Hargreaves passed him to have a try at the sheet.

When witness roused, the air was not very much purer and at first he did not know where he was. He then saw the two electric lamps burning near him. He made his way to the north end gate about 50 yards away. The air was pure there. Witness remembered he had been working with Hargreaves and wondered if he had been unconscious too. Witness went and got a tram and then went back with it to where they had been working and noticed the gas was very strong there. He found Hargreaves unconscious in a kneeling position with his head on his hands, which were resting on the floor. Witness was overcome about three or four times before he got Hargreaves on the tram. There he succeeded in getting him to the bottom of the cross-gates and tried artificial resuscitation for about three quarters of an hour, but without success. Witness then went to the pit bottom to tell the engineer what had happened and assistance was fetched.

The Coroner there is no doubt when you came round after those three hours and gradually realised that your mate was missing and determined to go back and face this gas, your conduct in that respect was wonderfully brave. Of course you took your life in your hands. There is great credit due to you, I think, in that respect.

The foreman of the jury said they concurred in their opinion as to the courage shown The Coroner: Yes his conduct in going back to find his mate was excellent. H.M. Inspector also put a number of questions to witness. As between the two, witness said Hargreaves was the chargeman, but had he thought he was doing anything foolish, he would have told him so. On a previous occasion they had got rid of the gas on the lines suggested by the manager similar to his instructions in the present case.

H.M. Inspector: As a matter of fact the gas has gone now?

H.M. Inspector: And the sheet is still there?

In further reply to the Coroner Witness said they were not missed as they had not told the engineman what they were going to do and had said they might be some time. In answer to the manager, witness said the manager’s instructions were that no one was to go into the gas. They had to do certain work which would not take them into the gas, and then on the Sunday morning, the Manager would come in good time to be with them and see how it was getting on.

Dr McLean said he had seen Hargreaves dead body at 10 o’ clock on the Saturday night.

A post-mortem examination showed that death was due to Asphyxia. After one or two breaths of the gas, deceased would have become absolutely unconscious. The doctor added that in such cases artificial respiration was no good. The veins were engorges and the best thing would be to make an incision in a vein with a sharp penknife and let out some of the blood. After that they could try artificial.

The Coroner said that he thought the accident arose through excess of zeal in trying to get the work completed, instead of waiting according to the instructions.

The jury returned a verdict that the deceased had been accidentally suffocated by inhaling gas whilst unwisely trying to pull down a sheet, from an inhalation of gas.

The manager then on behalf of the Flockton Coal Company and himself then expressed sympathy for the widow and family and other relatives, and said that Hargreaves was a man they admired and trusted. Undoubtedly over zeal in his work had brought about his death.

There is a marriage for Marion Hargreaves, could it be that with a young child she remarried?

Next on the memorial is Sydney Lockwood.  Sydney was born according to SWDTGW in Streethouse, near Wakefield. In the 1901 census, home was Alpha Homes and  Sydney was one of six children to George H Lockwood and his wife Ruth.  George, born in Huddersfield was a coal hewer, while Irvine and James, two of Sydney’s elder brothers also worked at the colliery.  Foster, his 16 year old brother was a railway porter.

Ten years on, Ruth is now a 54 year old widow, who very kindly filled in that she had been married 30 years, give birth to 9 children and buried 3 children and a husband.  The enumerator struck through this information.   Sydney aged 16, is now a colliery driver and his youngest sibling, Florence is at school.  There is a death entry for Ruth, aged 54 dying in the late summer of 1911. 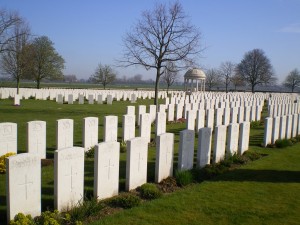 Sydney (Sidney), enlisted in Leeds, joining the KOYLI and becoming Private 11948 in the 6th Btn. A quick look, using his service number does not bring up a Service Record for him, but there is a Medal Card, which tells that he  entered from on the 21st of May 1915, making him eligible for the 1915 Star and the British and Victory Medals.  Sydney died of wounds on the 22nd of August 1917 (the memorial gives the date as the 23rd). A look at the Register of Soldiers’ Effects, gave the clue to his mother’s demise, as his 5 siblings, remember the details of the 1911 census, all receive an equal share of his monies, including a war gratuity – each received 9s 10d by September 1919.  He rests in Bedford House Cemetery, a short distance from Ypres on the N336, along with over 2100 other identified casualties.

Finally, but no less important comes Wilfred Bowers, the son of Walter and Frances.  Wilfred was born in 1898/9 and in the 1901 census he was living with parents and 9 siblings, ranging in ages from Wilfred aged 2 to Mary Ann aged 17 and all born in Netherton.  Home in this census was Town End, Shittlington.  Walter, born in Netherton, was a coal hewer; Francis (as census), worked at home; Mary Ann was a rag sorter and Herbert aged 15 was a coal hurrier.

Ten years later, the family had grown, and the census tells that Francis had given birth to 14 children, 10 of which had survived to be enumerated in 1911.  Nine children were at home in the census, it looks like Mary Ann had moved on.  All the boys n the family were either coal hewers or ‘trammers down mine’ (2 youngest boys).  Home in 1911 for the family of 11 was a 4 roomed house and just classed as Netherton.  Where did the 8 men and boys, and the 3 women or girls sleep? Possibly, in any available space! 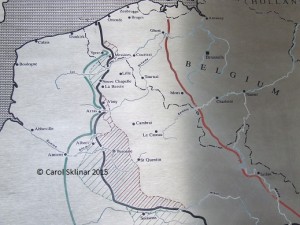 Wilfred enlisted in Wakefield, joining the Prince of Wales’s Own (West Yorkshire) Regiment, and became 43355, he rose to become a Lance Corporal.  The SWDTGW has his service number as 43355, while other sources have the number 53355.

Wilfred died of wounds on the 11th of July 1918 aged 19 and the monies owing to him were paid to his mother.   He rests within the walls of Longuenesse (St. Omer) Souvenir Cemetery, along with over 3170 other 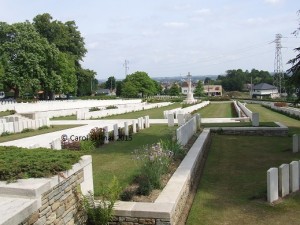 identified casualties, from the Commonwealth, China, Czechoslovakia. Poland and Germany.  There are also headstones to nurses, VAD personnel and Commonwealth War Commission staff.  I visited this cemetery in the summer but in the 100’s of pictures I took that day there is sadly not one for Wilfred – looks like another visit is on the cards.