In the past few years there has been a influx on the book market, of commemorative books- remembering those who died as a result of conflict during WW1, battles and the military hierarchy.

Many seem to have hopped on the World War 1 bandwagon, while others, like myself, have been transcribing war memorials and researching soldiers for many years.

Another person who has had a long standing interest in The Great War, as it became known, is Jane Ainsworth.  Jane, like myself, has decided that the men of her home town should be the focus of her putting pen to paper or fingers to keyboard!  But neither of us are forgetting the women! 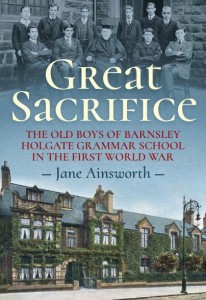 The Great Sacrifice focuses its attention on the 76 men, ‘old boys’, of Holgate Grammar School, Barnsley who went to war.

…...also included is a detailed history of the grammar school and extracts from the school’s magazine. Barnsley Holgate Grammar School was prestigious and its first headmaster, Reverend Charles Stokes Butler, was inspirational. The Old Boys felt a strong loyalty and affection for their school and this feeling was reciprocated by the teachers and other pupils. During the First World War, details of all those serving their country were recorded in the Old Boys’ Association magazine Alumnus, which was sent to men fighting at the front along with copies of the Barnsley Chronicle. Many of the men in the forces visited their old school when home on their precious leave and some contributed articles and letters about their experiences, which have been reproduced in this book. Determined to create a Memorial Book that was different from others Jane’s breadth of her research clearly demonstrates how she has achieved this. The men’s life stories are told in as much detail as possible, concentrating on their family and personal development as well as experiences during the war. It is important to remember that 42 additional brothers served and five of these died, as did three brothers-in-law. The invaluable contributions from Alumnus and many obituaries from newspapers allow us to get to know these men as real people. Jane’s aim is for these young men to be remembered as individuals, who could have achieved so much more if they had survived the sacrifice of their valuable lives for their country. Attending the Holgate encouraged the majority to go on to achieve their potential after school, with a lot becoming teachers. It instilled in them the values that led to early enlistment and rapid promotion in the forces. This is what united them – not the disparate “resting places” for their bodies, whether buried in a foreign grave or just a name on a War Memorial overseas. They were all much loved as sons, brothers, friends, colleagues, Old Boys of various educational establishments, husbands and fathers.

Great Sacrifice – The Old Boys of Barnsley Holgate Grammar School in the First World War is also available  at the book’s launch on Sunday the 20th of March, 11am – 3pm, in Barnsley Town Hall during Barnsley History Day, at an introductory price of £20. 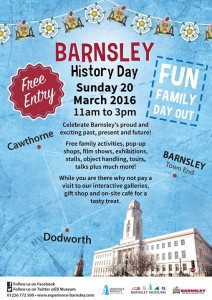 Also during the day local groups will provide information about their projects.  Plus, three talks will be taking place during the day:- Vikings  in Yorkshire; The life of Maurice Dobson and Pre-Raphaelite links in Barnsley, with FREE entry, it looks like it could be an interesting event for those with a Barnsley connection.