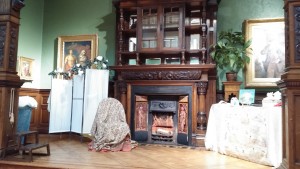 What better way to spend a chilly Saturday afternoon than listening to Lucy Addlington of History Wardrobe and her partner in costume Meredith (Merry) Towne.

The afternoon started well with a cheeky glass of Cava.  I took my seat, the room within Bagshaw Museum started to fill. Lucy entered, wearing a kingfisher blue costume based on 18th century designs, to a full house. 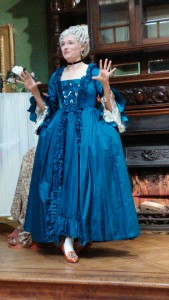 Not only does the History Wardrobe brand delight with fashion in all its forms, but you, the audience, are given lessons in social and economic  history with the odd bit of political history thrown in if needed.

As it says in the title, we were entertained with fairytales – their beginnings, their formation, their development and how no matter in the world you are from, there is a similar story at the other side of the world.   Lucy passed on the results of her research by telling us that the tales were written by men from as far back as the 1600’s by Charles Perrault, The Brothers Grimm and Hans Christian Anderson (lift right leg, slap right thigh and say rhythmically ‘I’m Hans Christian Anderson, that’s me!).  But! who told these tales to the men? It was women – grandmothers, mothers, elder sisters, the ladies who gave solace and nursing care to the poor, needy and infirm.  Passed down the generations by word of mouth – no matter what your ethnic origin is, stories were always told.

What stories and tales saw no generation, gender or ethnic boundary?  Cinderella, Red Riding Hood, Raupunzel and Beauty and the Beast, they all appear in some variation or other……….So to the reason why we spent Saturday afternoon in Bagshaw Museum – the costumes. 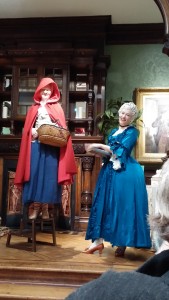 As I have said, Lucy entered wearing a kingfisher blue costume and then introduced Merry who was dressed as Little Red Riding Hood and the couple described Merry’s outfit, which apart from the cape, had been made by Merry, by hand.  The couple bounced witty jibes and comments to each other and it was soon time to see how the costumes were held together and held in place.  Well, it seems that for most of the time it is pins and drawstrings and laces.

Although, each of Lucy’s talks has costume as it’s main theme, she also brings extra items of fashion and memorabilia that compliment the theme.  This talk was no different, so we had fairy tale books, pretty red dancing shoes, sequin shoes – just like Dorothy’s.  But the icing on the cake, and according to Lucy, she had mortgaged Merry’s house and sold her unborn children on ebay, to obtain a width of material that was approximately 200 years old.  The back of the material was beautiful but the front was 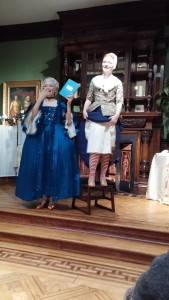 fantastic and had held on to its vibrant colours. 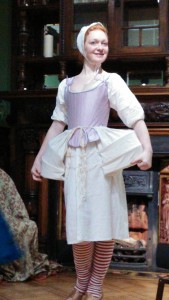 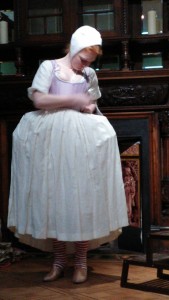 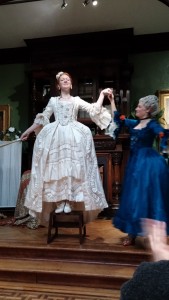 Lucy with Merry as Cinderella

We had been given a clue as to the ‘Cinderella’ dress by being told that the dress would be white and silver, given the reasons for these colours and shown the ‘stomacher‘, which had been hand embroidered by a friend of the duo.

By now we were building up to the pièce de résistance –   Merry was taking the roll of Cinderella, and every good ball gown needs good foundation garments, including stays.  With her undergarments secure, Merry left us, while Lucy continued talking about costume, shoes and fairy tales. 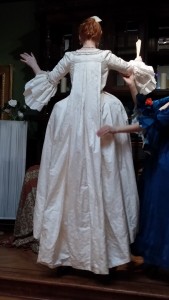 Cinderella gown made by Merry

Merry entered after being introduced by Lucy – the dress, also made by Merry,  was a work of art.  Further information was given about the dress and then all too soon the talk was over and it was time to go home or stay, look at the memorabilia and chat to Lucy and Merry. 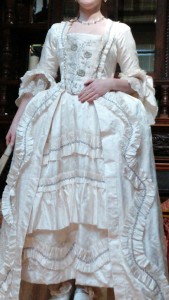 Now doesn’t that look like a work of art?