St George’s Memorial Church, is an Anglican Church within the Church of England’s Diocese and falls under the care of the Lord Bishop of Gibraltar. The Chapel is visited by  thousands of people each year who are visiting the area for a holiday or military pilgrimage. 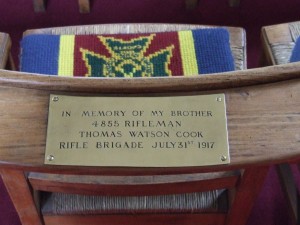 Thomas’s plaque tells ” In Memory of My Brother 4855 Rifleman Thomas Watson Cook Rifle Brigade July 31st 1917″.  A simple memorial to his Thomas from his brother.  Who was the brother that thought so much of his sibling to have paid for the memorial within the walls of this special Chapel so far away from home?

Firstly, looking at the CWGC collection, in the hope of the parents and their address being recorded on the site.  Yes, parents are mention but sadly, only by initials – Mr W W and Mrs S A 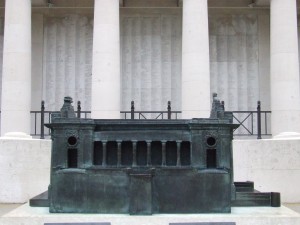 Cook.  Also recorded is their address – Mill House, Hamptons, Tonbridge, Kent.  A good start so far!  I now also know his age and that he is remembered on the Menin Gate Memorial, just a short walk away from St. George’s Chapel.

The collection of records named Soldiers Who Died in the Great War, tell that Thomas was born in West Wickham, Kent. At the time of his enlistment in Maidstone, he was living in Hampton, Kent.

I seem to be going out of the order in which I research men and women in the hope of finding the names of Thomas’s parents.  The Register of Soldiers’ Effects helps in a little by having his mother, Sarah A, as his beneficiary.  Armed with this information the 1901 census would find fewer results.  It did.  William W Cook aged 47 was a foreman rag cutter in a paper mill living at Hamptons in West Peckham.  Sarah A is there along with Frances aged 11, Thomas aged 6, Minnie and a young man who has been transcribed as Vancouter.  I did think that this could be a mis-transcription and was proved correct when I input one word into Freebmd – Vancouver. Yes, Vancouver George Cook was born in the Malling Registration District in the March Quarter of 1892.  Just as an added extra, there were a few people with the same first name, our Vancouver died in 1946 aged 54.

Ten years later, Thomas now 16 years of age, is in London working as a servant in the home of Leopold Victor Swaine,  no occupation or other information given, aged 70 and his wife Charlotte Jane  aged 66 – the couple having been married two years.  Thomas was one of six servants in the house at 14 Queens Gate, London.  As a snippet of added information Mr Swaine was born in Germany and his wife came from Mauritius.

Still in 1911,Vancouver, was now 21 and serving in the 136th Battery, Royal Field Artillery based at Louisberg Barracks, Borden.  His Victory Medal Roll entry gives his service number as 50662 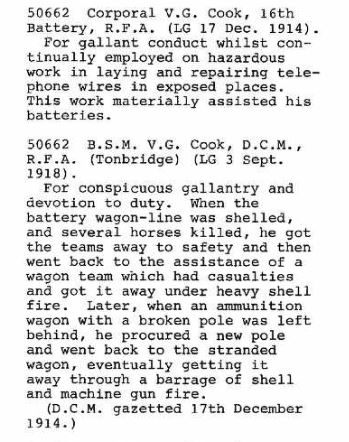 and rank as W.O.II.  His Medal Card gives a little more information – as W,O.I he served as 1029855.  Abbreviations on this card LS & GCM. AO 368. 1926 – GCM could be the abbreviations for General Court Martial, Army Order. Plus Col. Comdt Peshawar Dist – interesting, but not out main focus!  But saying that there is an entry for a Vancouver George Cook in the Probate Calendar, who has been awarded the D.C.M. and the M.B.E., he left over £2000 to his wife – are these two men the same?  Well, it looks like it according to the D.C.M. Citations having the same serial number as previous records. The next question and I am not going to answer this one, is, did he get the M.B.E. or have I led myself up a long garden path?

Back to the main man and who was the brother who had the inscription ” In Memory of My Brother 4855 Rifleman Thomas Watson Cook Rifle Brigade July 31st 1917″ placed in St George’s Church.  It seems that brother was none other than Vancouver George Cook.