Western Front Association meeting, having recently rejoined, I was looking forward to attend one of its talks. 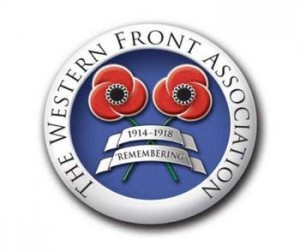 A few years ago I joined the Western Front Association and alas, I never renewed my membership, that is until a few weeks ago.

Within a few days I received a quite heavy A4 envelope in the post, which included my welcome letter from Sarah Gunn, the Membership Administrator (she had found my old membership number), my membership card, an issue of the Bulletin and a Special Edition of Stand To!  Armed with a ‘cuppa’ I began to look at when the meetings were, and who was going to share their knowledge with the membership.

There was one talk that rapidly caught my attention, but I’ll come back to that shortly!   The second talk would mean taking a few hours holiday from work to venture down the M1.  The talk was about a man whom I had a particular interest in, as he was one of the 250 people I am researching – what a bonus. After contacting the Chair of that local group I was disappointed to learn that the talk had been cancelled but I was to be put in touch with the speaker who duly contacted me a few days later.

Back to the initial talk that caught my attention.  The talk was to be in Allerton Bywater – not a million miles away, and a quick look at Google Maps gave me the whereabouts of the meeting 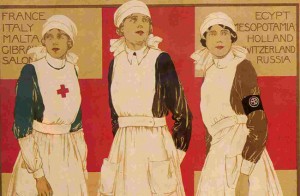 hall – quite a nice hall, small but warm, compared to some. After signing in and meeting a familiar face or two I sat down with a cuppa – you must think all I do is drink tea!

The talk was about the Voluntary Aid Detachment (V.A.D.), and given by Tim Lynch.  Tim is a former soldier, serving in the Falkland Islands and Ireland and is a military historian and photographer with numerous books under his belt.  The title of his talk was of interest, as I was researching a lady, who had served in the V.A.D., massing a total of over 8,000 hours over a four year period in a rather large house that was converted to a hospital.  Tim told that quite a few of these women

Tim started his 60ish minutes with how medical care and nursing care was given to military personnel prior to WW1.  Many volunteer groups were started being ‘staffed’ by both men and women.  The thousands who volunteered were self supporting – had their own private incomes or allowances.  The ladies uniform was similar to that of a nurses, and this did upset some nurses who had trained for years with very little remuneration.  The men, on the other hand had a uniform similar to that of a soldier but not in the khaki colour. 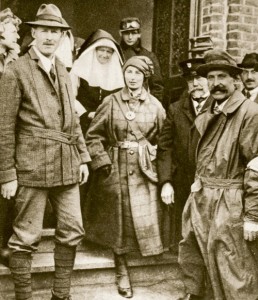 Recently decorated with the Order of Léopold: Lady Dorothie Feilding, from ‘The Illustrated War News’, 1915 via Wikepedia

What did these volunteers do in their working day.  Well, basically, anything that needed doing, from making beds, washing, cleaning, driving, very basic nursing, entertaining patients, fundraising and reading and writing letters.  The women volunteers were titled gentry, daughters of the ‘well to do’, merchants, ministers of the church, industrialists and so on and included Nancy Frances Cave, the daughter of an Estate Agent for Lord Cadogan’s Chelsea; Isabel Emslie, a Scottish doctor who specialised in mental health and social work; Elsie Fenwick; Dorothy Fielding M.M. (the first Englishwoman to be awarded the Military Medal for Bravery in the Field; Elsie Knocker and her friend Mairi Chisholm to name a few. One I would like to mention on her own right, was Flora Sandes.  Tim gave a good insight into her service.  She began as a St John’s Ambulance volunteer, travelled to Serbia 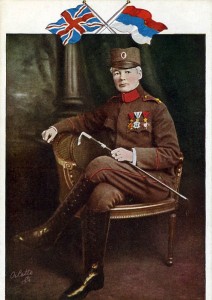 where in the confusion of the was was enrolled in the Serbian army – went through the ranks and ending up as a Captain and became the only female on the front line during both World Wars. What fantastic stories these women have to tell.

Time was passing and Tim began to tell us about an autograph book he had found in a shop – it belonged originally to Nancy Frances Cave, one of the many V.A.D. ladies.  Working over 4,000 hours in Maidenhead Drill Hall Hospital, she collected the autographs of the men that she and the other volunteers cared for.  Tim is researching those that have written poems, included a ‘ditty’, drawn a picture or in one case embroidered ‘Nancy’ on a page.  Many remarked how cheerful Nancy was and how she brightened their day.  One photograph does remain a mystery though.  A handsome young man writes ‘Nancy’, the date and ‘Richmond’.  Is Richmond the mystery man’s first name?  Or is Richmond the place where he had been or was stationed.  I do hope that the mystery can be solved.

With the talk over, it was time to look at the items Tim had brought for us to look at, including Nancy’s autograph book and a copy of the ‘Richmond’ photograph.  Tim had also brought a selection of his books, of which I bought one and had it signed.

Did I enjoy my trip to Allerton Bywater…………..Yes, I did