About two years ago my daughter and her now husband took a guided tour of the Whitechapel Bell Foundry.  I was going to visit them for a long weekend, but sadly, was not able to get a space on the tour………never mind.  I had my Kindle, a string of coffee shops were available.  I could easily find something to do for a couple of hours.  And I did!

Just around the corner from the coffee shop was Brick Lane.  I wondered up and down and onto the side streets.  One of the streets sounded familiar, did I know why?  No, then it struck me, Hanbury Street, was made famous in the 1880’s by the Whitechapel Murders………..Jack the Ripper.   I saw Spitalfields Market and the beautiful Spitalfields Church.

Time was passing by and I needed to retrace my steps back to Whitechapel Bell Foundry, But, I was held up just a little by a Blue Plaque on a house.  I had seen quite a few plaques, but this one caught my attention and drew me close.  As I walked up to the house two men were chatting.  As I drew close, they parted and let me pass on the narrow kerb ‘thank you gentlemen’, I said and continued.  But one of them looked familiar, I later remembered who he was, but I’m not telling!

But, I will tell who the plaque was to, you already know that, don’t you!   I’ve been meaning to do this blog a while, and it wasn’t until I went to a History Wardrobe afternoon, when Lucy Adlington, spoke of Anna Maria, that I was prompted to make a ‘draft’ page.

Who was Anna Maria?  She was born in 1688, the daughter Revd. Ephraim Garthwaite, who at one time was the rector of Harston, and his wife Rejoyce.  Anna moved to York, then later to the silk-weaving area of Spitalfields, London.

Anna is said to have created over 1000 designs for woven silk and some of her original watercolour designs from the 1700’s are now in the keeping of the Victoria and Albert Museum.

Her work is associated with the fashion at the time for floral patterns.  The English design at the time was for more dainty patterns, opposed to the French silks designs of the time, with large floral designs in unrealistic colours.

The Spitalfields weavers exported to Colonial America, which at the time was prohibited from trading with France.   Anna’s work appear in portraits of the period and surviving skirt panels previously owned by Martha Dandridge, have been acknowledged as Anna’s work. 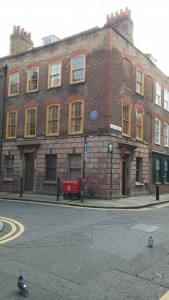 Anna died in October of 1763 aged, and rests in Christ Church burial ground.  Her house at 2 Princelet Street, Spitalfields, a three story dwelling with large sash widows, has on the first floor wall the Blue Plaque that was placed there in 1998 by English Heritage.

After meeting up with my daughter and her then fiance, who had by now ordered a Whitechapel Bell in the note of G, to ring at their wedding later in the year, we walked back to the car, but on the way we passed another Blue Plaque that caught my attention because of the dates moulded on the plaque for all to see, well for all to see who care to take their eyes up and look around.

So, that looks like the next blog is about that plaque!