Book Review – Shot from the Shadows by Mike Atherton

At a craft fair in 2014 I met Mike, who had a stand to promote his recently published book, The Long Shot.  As I have an interest in anything related to World War 1, especially the people who went to war, I bought a copy and Mike was kind enough to sign my copy. 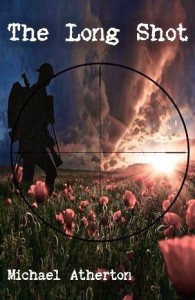 The Long Shot by Mike Atherton

The ‘Long Shot’ is set in WW1.  jack Adams and Jim Cunningham are friends and work as gamekeepers on an estate in Derbyshire.  One a natural shot  the other with an intuitive gift for observation.  The Great War has already started when a chance meeting with a serving officer on leave introduces them to a new kind of warfare, sniping. The Germans are already experts in this deadly game of marksmanship and the British are losing men at an alarming rate, something needs to be done urgently. Working as a team in the battlefields of France and Belgium the two men quickly make a name for themselves.

Jack becomes notorious, or heroic depending on which side you are on.  He is a wanted man, dead or alive. Circumstances and events lead Jack to be the hunted rather than the hunter and the man charged with hunting him is an older, and wiser German sniper named Albert, he too has a bounty on his head but this time by the British.

I found the book a thoroughly enjoyable read, as I was taken back to 1913 in Derbyshire, then later to the 1st of July 1916 and beyond.  Well done, Mike… when is the next one coming out?

The last question I can now answer, and the answer is, this month, March 2016. 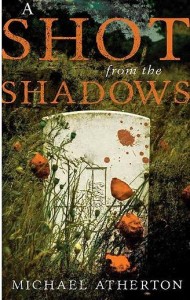 Shot from the Shadows by Mike Atherton

A Shot from the Shadows‘ see’s Albert Hagerman caught up in the dark world of political uncertainty in a demoralised and beaten Germany.   The Nazi party is in its infancy but it already shows signs of being a ruthless and murderous organisation.

In London people are noticing that the path to conflict is looking like it might become a highway for the great nations of Europe to be dragged into another war.  If it is to be avoided they must convince the main party, the Nazi party to toe the line.  To do this they have to convince its leader Adolf Hitler, and get him to see sense.  Jack Adams and Albert Hagerman are sent to collect him from the heartland of this new Nazi party.

Nobody expect it to be easy but the rewards are too important to leave any stone unturned, and any action to ensure the meeting take places is authorised.  In a modern day France an old Commonwealth War Grave collapses into a previously unknown bunker.  What the recovery team discover causes a ripple in the modern day.

Looking forward to another good read!

Follow the book title links to go to Mike’s shop and get hold of copies of his books.