Daisy Kathleen Mary Coles was born in Scotland, the daughter of Mr and Mrs Walter Coles of Priorsford House, Peebles. 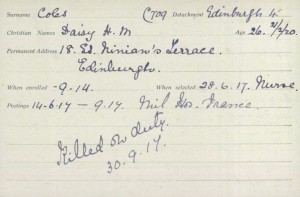 The Red Cross record card for Daisy has her listed as Daisy H M Coles, but her date of death matches the CWGC record and her headstone.  Her age, also differs on the card by two years. Daisy’s character and work were noted as being very good.  She was also Mentioned in Despatches. 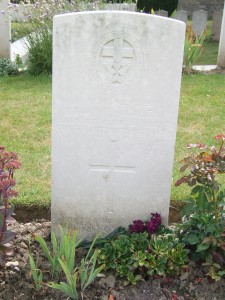 The headstone that marks her resting place has the usual information, name, date of death, age and service, but at the base the words ‘killed by enemy action while on duty’.

A few years after the war had ended her local church, Christ Church, Morningside, Edinburgh, unveiled their war memorial.  The Scotsman of Wednesday, 2nd of November 1921 recalls the occasion.

CHRIST CHURCH, MORNINGSIDE, EDINBURGH – The war memorial, in the form of a bronze tablet, which has been placed in the east wall of the north transept. “To the honoured memory of those from Christ Church, Morningside, who gave their lives in defence of truth and freedom in the Great War, 1914-1919,” was unveiled yesterday, All Saints Day, by Mr James M. Watt, and dedicated by Bishop Walpole. The anthem sung by the choir immediately after the dedication of the memorial was “Blest are the departed,” by Spohr. The bishop preached the sermon. Twenty-five members of the congregation, including Miss Daisy K. M. Coles, who was killed in a bombing raid on the hospital where she was nursing in France, perished in the war. A bugler of the 1st Battalion The Highland Light Infantry, at the conclusion of the service, sounded the “Last Post” and the “Reveille.” The Bishop was assisted by the Rector, the Rev, Eric H, Brereton, O.B.E., Hon. Chaplain to the Forces, 3rd Class.

The extract from the war diary (below) tells what happened on the night of the 30th of September 1917 and that three nurses were killed.  Dairy was one of those, the others were Elizabeth Thomson, the other was Staff Nurse Agnes Murdoch Climie.

Elizabeth Thomson, volunteered in 1917 as a nurse, and gave her contact details as c/o R Thomson, Esq., St John Street, Creetown Kirkcudbright and like Daisy, she was also Mentioned in Despatches. 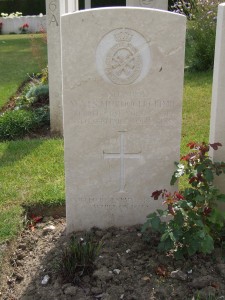 Agnes Murdoch Climie’s time in the war differed from that of Daisy and Elizabeth, as she was a professional nurse.

Agnes was the daughter of John and Isabella Climie.  After attending school she trained at the Royal Infirmary, Glasgow, later working on a maternity ward. In 1914 she joined the Territorial Force Nursing Service and by mid 1917 she was at the 58th (Scottish) General Hospital. Agnes was 32 when she was killed, her death being reported in the British Journal of Nursing on 10 November 1917.  Agnes was also Mentioned in Despatches for valuable service.  Her father wrote to the Matron in Chief  “I have heard from France of the wonderful bravery of the nurses. They gave their lives for patients whom they were dressing at the time.”

From the War Diary of 58th (Scottish) General Hospital, St Omer tells the story of that fateful night.

1/10/17 During a hostile air raid on the night of 30/9/17 – 1/10/17, three bombs were dropped in the camp at 10.40 pm, ( 2 on Marquees for patients and 1 in the nurses compound). Of the 2 bombs which dropped on the marquees, 1 struck a marquee which was, fortunately unoccupied, the other struck a marquee occupied by patients and 2 nurses, who were on duty. The bomb which fell in the nurses compound struck a bell tent, which was unoccupied as the 2 nurses who sleep in the tent were on night duty. The casualties which have resulted are :- Nurses killed 3, wounded 3 ( 1 dangerously). Other ranks :- killed 16, wounded 60. Total killed 19, wounded 63. Of the other ranks wounded, 14 were transferred to other hospitals and one of these has since died. There has been much damage to canvas and equipment. 54 marquees (hospital, large) have been damaged (2 have been absolutely demolished, while the damage to the others varies from almost complete destruction to mere riddling). 21 bell tents have been damaged ( 1 was completely destroyed by a bomb and 20 have been riddled). Many pieces of iron pierced the new corrugated iron sleeping hut for sisters. 1 piece pierced iron and 3 pieces of asbestos boarding. Numerous panes of glass have been broken in the permanent buildings. One of the ablution houses has been damaged.

Surgeon General MacPherson, the ADMS and the Matron in Chief called today and it was arranged for the transfer of all lying cases to other hospitals so that at night the walking cases left in hospital might go to the cave in the public garden and sleep there. In the evening patients and unit moved to the cave in the public garden and only the police and a few orderlies were left in the camp. The 3 wounded nurses were transferred today to No 10 Stationary Hospital.

2/10/17 The 3 nurses (Sister Climie, Nurse Thompson and Nurse Coles) and the 16 other ranks killed by hostile aircraft on the night of 30/9/17-1/10/17 were buried today at 4:00 pm in the Souvenir Cemetery Longuenesse. Sister Milne, who was dangerously injured in the same air-raid died last night in No 10 Stationary Hospital. 2 other ranks who were wounded have died today, so that the statistics as a result of the raid are, to date :- Dead, nurses 4, other ranks 18. Wounded :- nurses 2, other ranks 58. Totals Dead 22, Wounded 60.

The graves of Staff Nurse Agnes Murdoch Climie and Sister Mabel Lee Milne of the Territorial Force Nursing Service, as well as Daisy Kathleen Mary Coles and Elizabeth Thomson of the Voluntary Aid Detachments, killed by enemy aircraft 30th September 1917, erected by officers and nursing staff of the No. 4 Stationary Hospital [or the 58th (Scottish) General Hospital] at Longuenesse in Gouvenir Cemetery.