I have learnt a lot about Quakers since I started helping out early 2015 at the Maurice Dobson Museum in Darfield, where Geoffrey and Elsie Hutchinson (Barnsley Local Meeting of Quakers) are very actively involved. We have enjoyed many discussions about the First World War and my interest in Conscientious Objectors has expanded, especially since it is relevant to several of the Old Boys of Barnsley Holgate Grammar School.

Geoffrey gave me a copy of Quaker News 94 – Winter/Spring 2016, which featured White Feather Day on the centenary of the introduction of conscription. This inspired me to do some more research so that I could promote this day more widely in a year that will commemorate a number of significant centenaries, including the Battle of the Somme from 1 July to 13 November 1916.

As voluntary enlistment failed to meet the needs of the Army for additional troops, the Military Service Act was passed in 1916. It came into effect on 2 March 1916, when conscription was introduced for all British men aged between 19 and 41, who were unmarried or widowed without dependent children. A list of exceptions included men who had come forward for enlistment but been rejected, those discharged from service because of ill health, Men in Holy Orders or regular ministers of any religious denomination and those with a Certificate of Exemption.

Men could apply for a Certificate of Exemption from a Local Tribunal and these could be granted on four grounds as either absolute, conditional or temporary: 1) it was expedient in the national interests that he should be engaged in other work, or, if he is being educated or trained for any other work, that he should continue; 2) serious hardship would ensue owing to his exceptional financial or business obligations or domestic position; 3) ill health or infirmity; or 4) conscientious objection to the undertaking of combatant service. There were also Appeals Tribunals.

However, ironically, the Act made it a duty for men to die for their country but gave them the right not to fight, but it would certainly not make it easy for men to refuse to take up arms and Tribunals in different areas interpreted the rules in various ways as they were not impartial.

In August 1914, Vice Admiral Charles Cooper Penrose-Fitzgerald, who had retired from the Royal Navy in 1901, had founded the Order of the White Feather with the support of author Mrs Humphrey Ward. Mrs Ward was born in 1851 as Mary Augusta Arnold to a prominent Australian family of intellectual writers and educationalists; her novels contained strict religious subjects promoting Victorian values and, although she established educational settlements with the declared aim of equalisation in society, she campaigned against women getting the vote.

The campaign began in Folkstone with a group of 30 women distributing white feathers to men not wearing uniforms. The white feather as a symbol of cowardice appears to have originated in the 18th Century from the idea that a white feather in the tail of a game bird denoted poor quality. The campaign grew and spread across the country – and even included Suffragettes such as the Pankhursts.

These women showed no discrimination about denigrating soldiers home on leave, men serving their country in other ways or those who had been discharged because they were wounded. They even presented a white feather to Seaman George Samson when he was wearing civilian clothes to attend a public reception in his honour, having been awarded the Victoria Cross for gallantry in the Gallipoli Campaign. 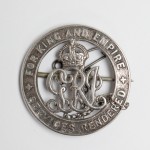 This led the Government to issue lapel badges reading ‘King and Country’ to employees in state industries and the introduction in September 1916 of the Silver War Badge for veterans honourably discharged due to wounds or sickness.

Conscientious Objectors (COs) were men who refused to fight on moral or religious grounds because their consciences would not allow them to kill. During the First World War there were about 16,000 such men, who showed great courage in standing up for their beliefs, particularly when some were treated more fairly than others.

The majority of COs given a conditional exemption agreed to work on the land in farming or forestry or in menial employment in hospitals or other institutions. Others decided to join the Royal Army Medical Corps as Stretcher-Bearers, who carried out the dangerous work of rescuing wounded soldiers from the battlefield. 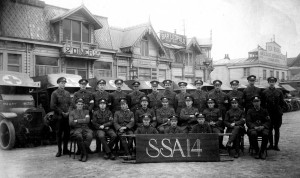 The Quakers established the Friends Ambulance Unit as they recognized from the outset of war the need for adequate medical support, although initially both the Red Cross and the Army were reluctant to involve a group of independent and pacifist volunteers. They provided diverse medical support and by the end of the war were staffing eight hospitals in France and Belgium.

The Commonwealth War Graves website (CWGC) lists more than 6,000 deaths of those serving in the Royal Army Medical Corps during the war, of whom many were Quakers believing that ‘to refuse to kill is a cause worth dying for’.

About 3,400 COs were allowed to join the Non-Combatant Corps established in March 1916, as Privates, who wore a uniform and were subjected to army discipline; they provided physical labour where needed but did not carry weapons or take part in battle. CWGC lists 26 casualties in the Non Combatant Corps from 1916 to the end of 1918.

Those who refused to serve or were unwilling to wear the uniform or to perform certain duties could be court martialled and subjected to severe punishments, Although 35 out of 50 men forcibly taken to France were sentenced to death for refusing to obey orders in a theatre of war, they were not shot but the sentences were commuted to 10 years penal servitude.

About 6,000 men were imprisoned, often in inhumane conditions, deprived of basic needs and bullied; many suffered mental breakdowns and physical illness because of their treatment and some died as a result. The scandal created by the numbers involved led to a new scheme whereby those imprisoned could be released to work in Work Centres or Camps, doing arduous work while wearing civilian clothes, but the conditions in the most notorious of these led to COs preferring to return to prison.

Felicity Goodall’s ‘We Will Not Go To War‘ presents some harrowing stories of COs in their own words while White Feather Diaries on the Quaker website provides details of Hilda Clerk, Bert Brocklesby, John Hoare, Howard Marten and Laurence Cadbury.

It is important that the bravery of these men is properly recognised as well as those who fought for their country. We should remember them all.

Thomas Corder Pettifor Catchpool  – (15 July 1883 – 16 September 1952, aged 69) helped set up the Friends Ambulance Unit in 1914 and worked with it voluntarily in France, being awarded the Mons Star. However, when conscription was introduced in 1916, Corder felt that he could no longer serve in any capacity that would aid the war so he returned to England. He became an ‘absolutist’ and suffered repeated trials, court martials and imprisonment, which damaged his health. After his release from prison in 1919, Corder worked with the Friends War Victims Relief Committee in Germany, having learnt German while in prison. He married Mary Gwendoline Southall in 1920 and they had four children.

Esther Pleasaunce (Pleas) Catchpool shared her father’s convictions. She got married in 1954 to John Holtom, a Mining Engineer who rose rapidly in the Mining Industry in South Yorkshire then the Energy Agency. John had been accepted into the Society of Friends after attending the Doncaster Meeting late 1940s; he met Pleas, who was on sabbatical as an Art Teacher at a London Girls’ School, at a Quaker Conference and she became an active member of the Barnsley Meeting. They had four children and lived in Wath-upon-Dearne for about 25 years before moving to Clopton in the 1980s for ten years. As this was close to the Molesworth missile base, they provided support to other pacifist demonstrators camping nearby.

Tribunals were set up following the introduction of the Military Service Act to consider requests for exemption or deferment from men or employers. In Barnsley, they comprised Lieutenant Colonel Hewitt, the military representative, a Solicitor by profession and the main interrogator, plus the Mayor as Chair, and other Aldermen; they were held in the Town Hall. About 210 cases were reported on the front page of Barnsley Chronicle on 4 and 25 March 1916 and in between were reports on applications to the separate Colliery Court. Men were not named but would have been easily recognisable from descriptions printed, the general tone of which is disapproving.

On 25 March 1916, the first 6 cases of conscientious objection were considered and most of these were refused but directed to the Non Combatant Corps. The first man was a Linen Drill Warper at Taylor’s factory who explained that he had consecrated his life to God, but he did not belong to any particular religious group. He was challenged by Colonel Hewitt and asked whether he would defend his mother if the Germans attacked her; his negative response elicited: “Then I submit this man has no conscience at all.” While one Councillor had objected to hypothetical questioning, another asked if the man had read any Shakespeare, “Well read it and you will find Shakespeare says ‘Conscience doth make cowards of us all’. It looks so in your case.”

A Clothing Manufacturer aged 33, who was a Congregationalist and had held for 15 to 18 years strong objections to anyone taking human life, was challenged by Colonel Hewitt as to whether a boy was capable of holding such views. The applicant was also asked about defending himself and directed to the NCC, but his request to join the Friends Ambulance Unit was agreed.

It took courage for Conscientious Objectors to attend these Tribunals, exposing themselves to the mockery and censure of those present as well as members of the public. They also risked retaliatory attacks on their person or property.