Another extract from the Wakefield Express this time for the 13th of April 1918.  A few young men are mentioned under this heading.  Who are they?

Wounded Soldiers – The following are among the soldiers who have been wounded in the recent fighting:- Pvte Wray Blythe, New Scarboro’, Netherton; Pvte Frank Earnshaw, son of Cr. and Mrs Reuben Earnshaw (Midgley), who is in a Brighton hospital suffering from shrapnel wounds in the knee and calf of the leg; Pvte W Frost, Sandy Lane, Middlestown, severely wounded in the shoulder; Pvte Cecil Marsden, Middlestown, reported wounded in last week’s “Express” is suffering from a shrapnel wound in the head.

Working through the article, it seems that Pvte Wray Blythe comes first.  Who was he before he went to war and did he come home to his family after the war?

A quick look at the CWGC and the answer to the last questions seems to be a ‘yes’. But I will leave that answer with another question mark and return to that one later!

The Ancestry website has no entry for a Wray Blythe.  There are however, a few entries listed that are close.  One entry in the military section is for a Ray Blythe of the 1/4th Y.L.I., service number 205564 – could this be our man?  Taking a look at Ray’s medal card, this confirms his rank as that of Private and shows his award of two medals. On to the census. The 1901 has an entry for Ray Blythe born in 1889 in North Newbald, son of George and Mary Jane.  George worked as a grocer and Ray was the youngest of the family aged 12.

It appears that the newspaper incorrectly spelt Ray’s name, as according to the Freebmd site, there is a Ray Blythe born in the December Quarter of 1888 in the Beverley Registration District.  It just so happens that North Newbald falls within the Beverley area.  It looks like Wray is Ray! 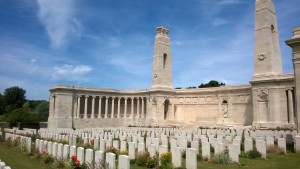 The newspaper has Wray wounded, but……..there are various entries for Pvte 205564.  One being in the Soldiers’ Effects, and you know what that means! Roy Blythe was Killed in Action in France on the 2nd of November 1918 and all his effects were to go to Mrs. Elizabeth A Heppleston.  Now another question arises………….who was Elizabeth?    If this is the correct Wray or Ray, he is remembered on the Vis-en-Artois Memorial with nearly 10,000 other casualties, which answers the earlier question about whether he came home or not.

Who is next? Pvte Frank Earnshaw.  There is no mistaking this soldier as his father is mentioned in the newspaper.  Frank is also a member of the local timber merchant family, that is still trading today.  In 1911 Reuben and his wife Eliza were living in Midgley with four children (two had died prior to the  census).  Reuben was aged 39 and had been married 14 years.  Frank was the eldest of the children. 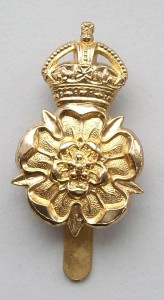 Frank was born in 1898 and attested on the 21st September 1916 at Doncaster, joining the Queen’s Own Yorkshire Dragoons as Pvte 4234 .  He stated he was 18 years old, was living in Midgley, and was a Pupil of County A**l*st (?). Frank was 5′ 5″ tall wit a 34″ chest.  His service record tells that he served in the UK from enlistment to September 1917 when he was sent to France.  About six months later, as we know he was wounded, his records give the date of his injury as the 21st of March 1918. After various postings he was transferred to the Lancashire Fusiliers and his service number became 52461.  After other postings at home and in France in May of 1919 he appears to be in the Balkans and November of the same year he seems to be back home.

Turning the page of his service records another enlistment page is revealed and know Frank’s occupation is clear – Pupil County Analyst – well I was close!  Further pages reveal that on 2nd December 1919 Frank was a Class Z, Private.

Frank Earnshaw left the army in November 1919, and his Dispersal Certificate gives his address as Thrushnest, Midgley, Wakefield and that he would be proceeding to Horbury Railway Station after dispersal.  The certificate lists quite a few articles of equipment and Frank seems to have mislaid a few.  He was in possession of:- Rifle, complete equipment according to unit, entrenching implements, great coat, Army Book 64 and he signed to say that if he lost any of the items in the list he would be charged.  Frank seems to have lost his steel helmet somewhere…………I wonder if he was charged? Other information on the certificate duplicates things already known about him, but his occupation is now given as Chemist and his Medical Category is A.  He must have had a good recovery from the shrapnel wounds to his leg. Frank was also given a Protection Certificate and Certificate of Identity – basically, saying that he had served but was not remaining with the Colours.

It is a change to find someone who survived the war and came home to his family. Did he marry and start his own family, I don’t know, but there is an entry for a marriage in 1924 to a Martha Earnshaw – could this be a cousin?  Is it our Frank? There is a death entry for 1957 for a 58 year old Frank Earnshaw.  The years and ages fit……..you tell me.

Now it’s the turn of Pvte. W Frost of Middlestown, who seems to be a little left out when it comes to information.  A number of men with the initial W appear in military records and census but no information that could say ‘yes, this is the one’.

Finally, Pvte. Cecil Marsden.  There are four men by this name.  Two I have disregarded by birth year and the other one simply by where he was living.  That leaves Cecil Marsden born around 1891 in Flockton the son of Henry and Jane, who in 1911 were living in Middlestown.  Henry was a colliery deputy and Henry, the eldest child of three was an apprentice plumber.  Frank was 20, his sister Florence was 18 and brother Maurice was 1 – their parents being married 21 years and having 3 children and none dying.  I have a theory for that one but will keep quiet!

On the 13th of April 1914, Henry Marsden and his family set off for the Wesleyan Chapel, Wesley Street, Ossett to witness the marriage of Cecil and Eleanor Clarkson.  Cecil was living at Glen View, Old Road, Middlestown, while Eleanor was living at 13 Little Town End, Ossett. 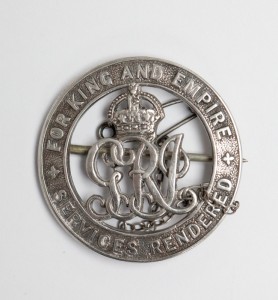 There is a Medal Card for a Cecil Marsden, which gives the Victory and British Medals for service in the Y & L R (Yorks and Lancs Regiment), Pvte 202794, but also tells that Cecil received a SWB (Silver War Badge).  We know that Cecil had received a shrapnel wound to the head and was therefore eligible for the SWB.  The Silver War Badge Records for Cecil tell that by now he was a Corporal and serving in the 4th Battalion from which he would be discharged.  He enlisted on the 13th of Marsh 1916 and was discharged on the 9th of November 1919 due to sickness aged 22 – there seems to be a bit of a miss match in ages as on his marriage certificate he is in his 20’s, years later he is still only 22!  Which age is correct?  His year of birth plus the 22 years of age on his SWB papers does not give 1920, but the entry below for a man aged 31 is nearer as he was 23 when he married.