The Battle of Jutland

The battle was the main sea battle during 1914-1918, taking place over two days. The German vessels, including Lutzow and Derffinger, were under the command of Vice-Admirals Reinhard Scheer and 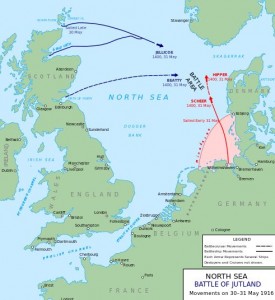 In total the navy lost 14 vessels, including HMS’s Defence and Black Prince while the Germans lost 11. British casualties amounted to some 6,800 men. After all these years it is still debatable as to who won the battle, but one thing was sure, the German fleet never ventured out of port again although there was still the odd skirmish in the North Sea between vessels. German ships out of Scapa Flow surrendered at the end of the war.

The Black Prince was commissioned in March 1906, being launched two years earlier. She was 505ft in length, 73ft 6in wide and displaced 12,790 tonnes and could reach 23 knots. 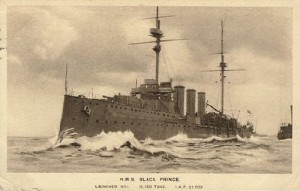 Separated from the rest of the British fleet, according to German reports, Black Prince approached the German lines at approximately midnight. She turned away from the German battleships, but it was too late. The German battleship Thüringen fixed Black Prince in her searchlights and opened fire. Up to five other German ships, including battleships Nassau, Ostfriesland, and Friedrich der Grosse, joined in the bombardment, with return fire from Black Prince being ineffective. Most of the German ships were between 750 and 1500 yards from Black Prince — effectively point blank range for contemporary naval gunnery. Black Prince was hit by at least twelve heavy shells and several smaller ones, sinking within 15 minutes. There were no survivors from its crew, all 857 being killed.

One of those 857 was Joseph Edward Oldroyd, son of Joseph and Elizabeth of 18 Brooks Square, Bridge Street Morley – One source gives the family’s address as Brook Street, Hollow Top, Morley.

Joseph was born on the 5th of October 1885 in Leeds. The Royal Marine Grave Rolls confirms that Joseph was born in Leeds and was killed or died as a result of enemy action. Consulting the census of 1891, not one entry could be certainly our Joseph. The same goes for the 1901, but there is an entry for an Oldroyd family living in the Hunslet area.

The Royal Navy Registers of Seamen’s Services confirms why the 1911 census entry I found for Joseph in the navy, was the one I was looking for, as he signed up on the 15th of February for 12 years, ending up as Stoker 1st Class, 308243 in the Royal Marine Light Infantry.

Joseph was 5ft 7½ in tall with dark brown hair, brown eyes and a dark complexion. He seems to have been through the wars a bit as he had three scars on his head, a scar on his left cheek and a scar on his right loin. His conduct seems to have been generally good throughout his service with the odd glitch where he had spent some time in the cells. On the 22nd of October 1908, he is reported to have broken out of his ship and served 14 days in cells. Even though there was the odd mishap he was still awarded three Clasps for Conduct.

He served on various ships including:- Nelson, Victor II, Hampshire, Patrol, Monotour, sometimes having return postings to previous ships, finally ending up on the Black Prince. During his service he transferred to the Royal Navy. The National Archives hold the Register of Service for Joseph and can which can be downloaded for £3.45

The wreck of the Black Prince is classified as a war grave site and is regulated as such.

Another seaman who served during the Battle of Jutland  was  as a young naval officer named Prince Albert, later King George VI. Prince Albert fought in the battle on 31st May 1916 on the British Battleship HMS Colossus and came under fire.

There is a Wikipedia page for the Black Prince which gives more information on the vessel and its service.