What can words inscribed on a headstone tell you?

For starters, you will hopefully find names and dates of death but I have written about a headstone remembering ‘father and mother’, luckily other people were remembered on the headstone to work out who the parents were.  The missing parents names is quite unusual in my experience.  While others omit information there are the families who add extra snippets  of information.  These snippets are a boon for family historians and genealogists, as they can confirm information already known or, give a clue to information yet to be found. 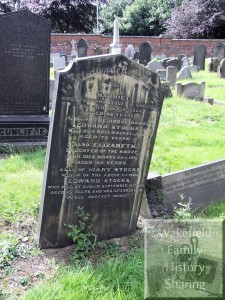 One such headstone in Sugar Lane Cemetery, Wakefield, is to the Stocks family.  The headstone is delicately ornate as it stands proud among a few lower commemorations, even though there is a slight leaning to the right (depending on which way you look at the stone!)

Harriet (nee Kirkbhthe wife of Edward Stocks of Wakefield died on July 1864 aged 46.  Her husband died on November 25th 1890 aged 73.  What happened  to the couple prior to their demise?  There is a marriage for a Harriet Kirkby and Edward Stocks that took place in the Huddersfield Registration District during the September quarter of 1848.

In 1861 the couple were living in Park Street in the Primrose Hill area of Wakefield with Elizabeth their 10 year old daughter. A few years later we know that Harriet had died.  What became of Edward?

Edward, born in Marsden, Huddersfield was by 1881 was hotelier of the Royal Hotel on Wood Street, Wakefield, living with his second wife, Mary and his daughter Elizabeth and Mary Duckworth who he states is also his daughter!  It appears that Mary was a Duckworth (nee Woolley) prior to her marriage to Edward in 1867 in the Huddersfield area.  Edward we know was proprietor of the Royal Hotel, which was owned by Hy Mark Carter and others, Brewers of 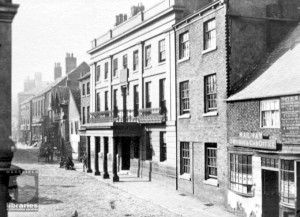 Wakefield, he would be in later years the licensee of the Stafford Arms.  The Stratford Arms, according to the Alehouse Licences, was owned by Trustees for Hatfeild Carter Esq., for whom J T White, Esq., of Westgate, Wakefield was the agent. I suppose you could say that life continued, in a way that life still does today and more than likely will do in years to come. 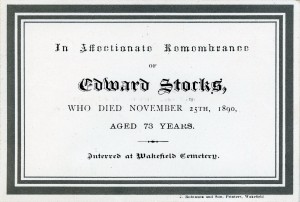 believe that his passing was not quick.  His daughter, Elizabeth died on March 29th 1891 aged 40. That leaves the two Mary’s – Mary Stocks and Mary Duckworth her daughter.

Mary Woolley, the wife of John Duckworth. She was the sister of Sarah Woolley, who married William Henry Gaskell who inturn is connected to the Gaskell family who lived in Wakefield. 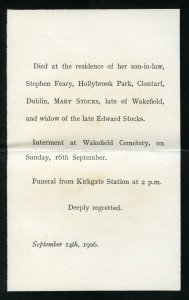 Mary Stocks – it is here where the headstone caught my attention.  The information about Mary would be a bonus for anyone looking for her death and who  ended up frustrated,annoyed and probably said they were not going to do this anymore.  Without the information on the headstone, if you were a distant relative, you would have searched death records and returned zero finds.  Whoever added Mary’s death details of September 14th 1906, also included that she died in Dublin aged 69 and was interred in Wakefield.  If you, the researcher, did not have access to the headstone or knew of Wakefield MDC’s online Burial Records, you may not have known where she died and now rests.

It appears that Mary and Stephen lived in Ireland – could her mother have moved with them or been on a visit when she died?  This entry seems to be all questions doesn’t it?  There goes another question to add to the pot!

Mary Feary, now a widow, of Hollybrook Park, Clontarf, Dublin died on the 4th of February 1920 leaving over £1200 to Robert Henderson Feary and Geoffrey Clarke Ferguson according to Probate which took place in England.

It looks like it could have been Mary who included the valuable information about her mother.

One last question.  Did Mary accompany her mother on her final journey and stay until after the funeral? Does anyone know?