The Wakefield Express, along with many other local newspapers, has wonderful snippets of life as it was.  Many of the articles are filled with information and are full of details.

One such article is for Harold Day – who was Harold?  What did he do for a living?  Did he join the services?  Did he come home to his family?  All important questions for family historians and genealogists.

Harold in the 1911 census was living with his wife, Violet Annie Baylis Day at 14 Ellen Terrace, Sandal, Wakefield.  Harold was 29 years old and born in Soothill.  Violet was also 29 years of age and hailed from New Mill, Huddersfield.

Harold had married Violet on the 8th of August 1908 at the Parish Church of Gawthorpe and Chickenley. He stated he was a bachelor, working as a schoolmaster and living in Gawthorpe 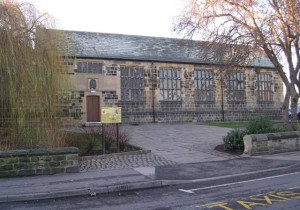 and his father was Joseph Day.  Violet on the other hand, was also of Gawthorpe and the daughter of Walter Topham.  Witnesses on that memorable day were John Richard Dickinson and Walter Topham.

Some of the questions have now been answered, but who was Harold before 1908?  The 1901 census can answer that one.  Wakefield Road, Soothill was the address give to the Day family in 1901.  We know that Joseph was Harold’s father – he was employed as a School Attendance Officer aged 60.  His wife was Clara, who was five years junior to her husband and Harold’s siblings living at home  were Sarah, Ezra and Charles.

Ten years earlier in 189, Joseph Day was a School Warden and his son  Harold was aged 9 and a scholar – ten years later he would be an assistant schoolmaster. 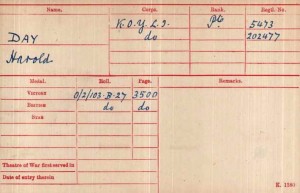 Harold did join the army, becoming Pte., 5473, and later 202477 – according to his Medal Card. What happened next?  The Wakefield Express issue of 1st September 1917 may answer that one!

Cathedral Day School Teacher Killed – Private Harold Day, KOYLI, who was killed in action at August 10th, leaves a widow and a little son, who lived at Ellin’s Terrace, Sandal.  He attested under the Lord Derby Scheme, and was called up at the beginning of June, 1916.  He went into training at Clipstone and proceeded to France  in May.  Previous to joining up he was assistant master at the Cathedral Boys’ School, where he had been since 1906.  His death is a very great loss to the Cathedral Schools, for he was an excellent teacher, and had he lived he would have done well in his profession.  His death is very greatly regretted by the managers, teachers and scholars, who thought very highly of him.

Harold rests in Croisilles British Cemetery, Croisilles some 13 km south-east of Arras along with 1,170 other casualties of war, including 647 unidentified casualties, six Commonwealth airmen of the Second World War and 18 German war graves.

Violet, at home with their young son received £227 from Harold’s estate when Probate was completed in December 1917  and  would still be receiving money from the War Office until September of 1919, which came in 2 installments.