Don’t the months go by so quickly?  It doesn’t seem a month since my last visit to the Western Front Association meeting in York.  The speaker at this months meeting (May) was Chris Payne.  I had been looking forward to his talk as it seemed to be more about a person not a battle.

Charles Frederick Payne was the reason I ventured north for the Saturday meeting. Chris was informative and enthusiastic in telling the packed audience of Charles’ time during WW1 and seemed to hold the every one of us in the palm of his hand.

Although I was a little disappointed that there was more battle information than family history information, I didn’t mind as Chris guided every one of us through Charles’ time fighting for King and Country. 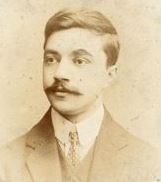 Charles was the son of Henry Stableforth Payne and Emily Clarke and was born in 1883 in Westminster, London and had 6 siblings.  He married Ida Muriel Payne – after the meeting I spoke to Chris about Charles’ wife having the same surname – was this how he included them on his tree or was his Ida a Payne before marriage as well as after her marriage – yes they were both Paynes and distantly related. That sorted that one! And was confirmed by FreeBmd who showed them marrying in the early summer of 1909 in the Wandsworth Registration District of London.

1911 has Charles and Ida living at 44 Tranmere Road, Earlsfield, London. Charles was aged 27 and a Pitman qualified shorthand typist.  During his life Charles travelled in Europe where his skills were needed.

1914 came around and Charles enlisted into the West Riding Regiment with the service number 235435.  His service took him through France, seeing fighting near Arras and Rossignol Wood (Nightingale Wood) and all the while he was receiving letters and packages from Ida and his family. I think I will let Chris Paye tell you more about Charles Frederick Payne letters from his wife.

Chris went into details about the places and conditions that Charles and his fellow soldiers endured during their time in France and all the while seemed very concerned that one of his parcels from home had not arrived.

I think the whole room breathed a sigh of relief when we found out from Chris that the war was over and Charles was still alive.  However, Chris continued his talk and a silence fell around the room, you could hear a pin drop and I am not ashamed to say I had a tear in my eye – Charles Frederick Payne died on the 11th of February 1919 aged 35 and rests in Terlincthun British Cemetery, on the outskirts of Boulogne. 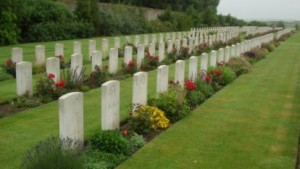 Terlincthun had been a site for rest camps since June of 1918 and from 1914 Boulogne and Wimereux had had hospitals and other medical establishments within their boundaries.  By 1920 the CWGC cemetery had over 3,300 burials, including Charles.  The cemetery during WW2 suffered greatly from shelling during the early part of the war and later from German occupation. The inhabitants of the cemetery has grown and there is now over 4,300 Commonwealth burials and more than 200 graves of other nationalities – mainly German.

So it seems that Ida was all set to welcome Charles back home to his children and family to be so distraught and disappointed some three months later when she would have heard the news of his death.