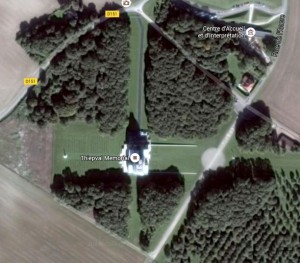 Thiepval Memorial to the Missing from the air via Google

James Hodgkiss was another young man whose final resting place is known only unto his God, as he like many others, is remembered on the Thiepval Memorial to the Missing.

Who was James? Who were his family? Where did he live and work?  Let’s find out!

Well, it seems with a name like Hodgkiss there are quite a few variations, as I learnt when I taught family history a few years ago – one of the class was researching his Hodgkiss line. So with time restraints and non-high speed internet, lets go!

James was the son of James and Kate Hodgkiss in St Paul’s, Cheltenham.  In 1901 he was one of five children living with his parents at 8 Leva (?) Court, Gloucester.  James snr. worked as a Hawker.

The entry for James in the 1911 census evades me, but with a little more time, he will turn up. anyway, in 1912 he married Gladys Edith Mayo.  The wedding took place on 21st of January at St Mary de Lode in Gloucester.  James at the time was working as a labourer, living at No6 Toby Court, Deacon Street.  His father, was now noted as being deceased, but prior to his demise had been a labourer.  Gladys Edith on the other hand was living at 22 Clare Street, the daughter of Alfred Mayo, a waterman.  Witness to the union were Charles Henry Wakeman and Charlotte Young.

James enlisted in Gloucester, joining the Gloucester Regiment and becoming Private 2055 or as seen on some documents 2053.  He was in the 10th Service Battalion.

We already know that James died, but did his union with Gladys produce any children?  There are two entries on FreeBMD for children being born to Hodgkiss/Mayo in the Gloucester area – Ivy E born in the June ¼ 1914 and Grace V born in the September ¼ 1916.  Was Grace born after her father’s death if this is correct?  How did Gladys cope with being the mother of two children under three and the news of her husband’s death?

The medal card for James tells his medal entitlement and that he was KIA on 26.7.16.  The Soldiers’ Effects Register goes on to tell that James was now a Lance Corporal, also how much money was due to his widow Gladys Edith, who by now was Gladys Edith Whitaker.  The register also tells about James’ death ‘Officially accepted as on or about 26.7.16 France.’

The Commonwealth War Graves Commission entry for James gives one more snippet of information for those interested in James’ life – his widow, now Mrs Whitaker had moved north and was living at 12 Grace Terrace, Thornhill Road, Upper Wortley, Leeds.