Christian Moss, born in Reading around 1893, was the son of Ernest and Christina Moss.

In the 1901 census the Moss family were living at Waterend, Basing, Basingstoke.  Ernest worked as an Inn Keeper (pub – poss. Red Lion Inn) . 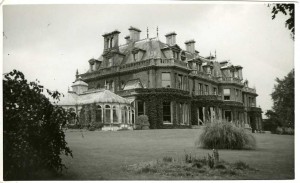 Ten years later, Christian is found working as a Hall Boy in the home of Charles Harvey Combe and is sister Dorothy.  Home for the Combe siblings was  Cobham Park, Cobham Surrey. Cobham Park boasted 50 rooms, with 12 house staff to keep the place running smooth, plus numerous outside staff.

Sad to say, due to the title of this series of blogs, that Christian did not survive the war.  He was killed in action 100 years ago aged 23 and like many others mentioned earlier, is remembered on the Thiepval Memorial to the Missing along with thousands of other men, both young and old.

The money due to Christian was paid to his mother, Christiana, paid in two lots.

But before we leave Christian in peace, let me tell you a little more.  Christian was 22 years old and 50 days when he enlisted. His medical tells that he was 5′ 4″ tall and had a scar on the left of his forehead and that his vision was good. At the end of January 1916 Christian had an abscess which was treated at 100 Field Ambulance. He returned to his Battalion a week later. Christian had two siblings – Percy and Ernest and four aunts and uncles (Oliver, amos, Arthur and Harry Moss, all aged between 40 and 56) mentioned on military papers  that were completed after his death.

The personal property of Christian, according to a War Office memorandum dated 16th December 1916, were to be sent to his mother at Waterend, Old Basing.  She had in due course to reply and acknowledge the receipt of her son’s possessions. The paper listing Christians property has been damaged but a few items can still be seen : buttons; long shirt; letter and photo. Could the photo be that of his mother, a family group or his sweetheart?  I will leave you, the reader, to decide.

Rest in Peace, Christian, whereever your body may lie.