The Wakefield Express and other newspapers around the country are a full of articles and snippets of information relating to World War I and the men and women who fought, nursed, gave aid and comfort and who died, as many war memorials say ‘for their country’.

Another in the Wakefield Express series

Wakefield Express 19 October 1918
Private Ernest Webster, of the Mounted Brigade Field Ambulance, has been killed in action in France. He was unmarried, and his home was at Albert Street, Ossett, where his widowed mother lives. He joined up shortly after the outbreak of war, but was only sent out to France in December of that year. He was a prominent member of South Ossett Church Football Club and was also its secretary for several years, and its representative on the Ossett and District League Committee, this is about the fourth playing member of the club who has given his life for his country.

Ernest, was killed in action on the 8th of October 1918 aged 33, with the war only a few weeks to go until peace was declared.  He rests in Beaurevoir British Cemetery, some 25 km south of Cambrai, along with nearly 300 other casualties of war, of which 244 are identified.

Ernest, was a local lad, born and bred in Osset, as had his father and mother, George and Eunice (nee Gunson). Home for the family in 1891 was The Green.  George worked in one of the local mills as a labourer, as did his son, Joshua, while his daughter, Elizabeth aged 22, was employed as a rag sorter.  Young Ernest was five years old and went to school.

Ernest was born on the 28th of May 1885, on the 27th of July, he was taken by his parents to St Peter’s church, Earlsheaton, where he was baptised – more than likely with family and friends in attendance.  George, when asked his occupation by Rev. Tunnicliffe, told he was a spinner and this information was included on the baptism record.

By 1901 Eunice and Ernest are the only two family members living together. Eunice works as a ‘knitting machinist’ on her own account, while Ernest is 15 years old and a rag sorter.  From the above newspaper article, it is known that Eunice is a widow.  When did George die?  There is a death entry for a George Webster aged 51 and registered in Dewsbury in 1892 – is this her husband?

Ten years later in 1911, Eunice and Ernest are living in three rooms at Willey Buildings, Manor Road, South Ossett.  Eunice has no occupation listed but did include how many children she had and now many were now living.  It appears that Ernest completed for form on behalf of his mother as he signed ‘Ernest Webster pp Eunice Webster’ – now-a-days, in this age of texting, emails and computer generated letters, you don’t tend to see ‘pp’ (per pro) do you?

while a B Section had 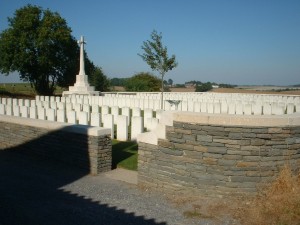 Ernest’s headstone in the Commonwealth War Graves Commission cemetery bears a cross, his name, service number and regiment.  One of the documents held by the CWGC inform that Mrs F Harrop, Horbury Road, South Ossett, was his next of kin. While his entry in the Register of Soldiers’ Effects tells that monies were paid to an Emma and later to Eunice, his mother.

Although Ernest rests in a foreign field, he is remembered in his hometown  along with many others.