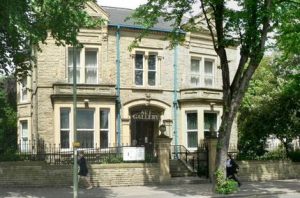 Extracted from the Yorkshire Post and Leeds Intelligencer 18th April 1936:-

Pictures at Wakefield – Acquisitions of the Art Gallery. Among interesting events at the Wakefield City Art Gallery this year is to be an exhibition of the work of Miss Louisa Fennell, the members of whose family have presented to the gallery nine of the original water colours of Wakefield from which the well-known series of repodictions of views of Wakefield were taken.
Miss Fennell faithfully recorded interesting views of Wakefield and the fact that the subjects of the scenes have now altered in most caes almost beyond recognition has made the paintings even more valuable from an historic point of view.  With the paintings have also been presented a copy of the artist’s book – “The live of St. Paul in Rome” – and the original sketches for the illustrations.  In addition the family have given three fan designs which are water colours on silk, two executed by Miss Emily E Fennell, and the other one by Miss Louisa Fennell.  The exhibition of Miss Louisa Fennell’s work is to be held in the Gallery in September.
Rece191nt acquisitions by the Gallery are two oil paintings, “Seascape”, by George Chambers, and “Cottage Interior”, by an unknown artist, both presented by Mr A A Haley, and a portrait by a talnted West Riding artist, John A Spancer, purchased by the Corporation from a recent exhibition at the Leeds Art Gallery.  Mr T Burgess of Rotherham, has loaned to the Gallery a painting by Pieter Wouverman, a 17th century Dutch artist, and a younger brother of the famous Philip Wouverman, who was born in Aarlem in 1614.

The article concludes with the following final paragraph:-
The Wakefeld Art Gallery has come prominently to the fore rcently as a result of the special exhibition of pictures suitable for schools, arranged by the West Riding Education Committee, held there.  it was th first exhibition of its kind to be held in the North of England.  nearly 5,000 people visited the Gallery during the exhibition and inquiries concerning it have been received from all parts of the country, and one from South Africa.

Who was Louisa Fennell.  Louisa had been born in Wakefield in 1847 to William and Mary Fennell.  William worked as a Wine Merchant.  The family of 12, in 1881, lived in Westgate, Wakefield.  By 1901, William is an 83 year old widow, still working as a Wine merchant is  living with four of his spinster daughters at 31-33 Westgate, with two servants. Ten years later in 1911 Louisa was now the head of the household of 33 Westgate, where she lived with two of her sisters and one servant.  Home, 33 Westgate is quite a large house consisting of 12 rooms.

Louisa was best known as a painter of landscapes and townscapes in the West Riding of Yorkshire, especially, Wakefield.  She also painted a series of townscapes of the City of York. She exhibited widely in the North of England – in 1884 her paintings were exhibited at the Spring Exhibition in Derby.

Sometime before 1930 Louisa moved to 21 St John’s Square, Wakefield (according to the 1911 census 21 St John’s Square was a 7 roomed dwelling), and it was there in 1939 that her sister, Bertha, was found living with one servant, Ivy Morgan (later to be Armitage) in 1939. Other residents were, a Company Director, Transport Engineer, Teacher, Headmistress, Inspector of Nurses and Midwives, HM Inspector of Schools.  The beautiful three-sided square, with St John’s Church at its centre, is quite unlike the square today. 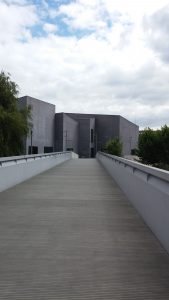 Wakefield City Art Gallery, now having moved to a purpose-built building by the River Calder and re-named The Hepworth Gallery (taking its name from another Wakefield artist) has within its collection 17 Wakefield scenes and other works by Louisa.