Following on from my previous blog, I thought I would highlight one of the battle names and find a young man who fought during the Great War.

I found a young man named Calais Berry who was born in the late 1890’s in one of the London boroughs. What made this young man interesting was that his WW1 service record has survived the bombings in London during WW2.

Calais birth was registered in the Wandsworth District in 1897.

1901 Calais and his family are living at Fords(?) Place, Battersea. He was the son of Abraham Berry, a 51 year old carpenter and joiner who was born in Shropshire. His mother Martha A was aged 41 and born in Cape Town, Cape Colony. Of their eight children, the 6 eldest were born in Chatham, with the two younger ones being born in Battersea.

Ten years later Martha A Berry, had included in the second column that she was Mrs Berry, aged 51 she was a widow. Mrs Berry had included that she had been married 33 years and born 10 children – all of which had survived. Four of her children were still at home, ranging in ages from 21 down to Calais’ (now 13) younger sister who was 11. Home for the family was a 3 roomed house – 7 Fords Place – could this be the same house she shared with her husband and her other children? Martha signed the census form Martha Agens Berry.

Signature of Calais Berry on his Attestation Papers via Ancestry

Calais Hugh Berry attested before Capt., H R Hadow in Battersea on the 18th of August 1915. He was a mill assistant living at 8 Alfred Place, Battersea, London. His age was listed at 9 years and 271 days. His height was given as 5′ 6” tall and he weighed 115lbs. Distinctive marks – he had a raised mole on the back of his neck. Calais served as Gunner 166591 in the Royal Garrison Artillery.

On 23rd June 1916, Calais’ time in the military takes a little bit of a turn! One record tells on 23trd June 1916 he is in No 6 Canadian General Hospital, Rouen. He is sent back to England onboard HS Aberdonian. A letter from the Metropolitan Hospital, Military section, Endfield Road request Calais medical records. He is suffering from vertigo, the records are requested for his discharge when fit. Calais is now serving as Gnr 41261, RFA, HQ Bgde, A Bty.

On 19th of July 1916, the War Office received a letter from Mrs A Berry, Calais mother.

“ Dear Sir, Having already written to you on behalf of my son, Gunner C Berry No 41261, A Sub, 51st reserve Bty, ****brige Camp, Hemel Hempstead, Herts. I am writing to you once again as I want to prevent him returning on Active Service until he is of age. He has only returned to England a month ago, suffering from Shell shock, and Vertigo, He is my only support. I am very anxious about him for I know he is not fit for returning yet. I have no ********* for him being in the army, but, I think it only just that he should not go back to France until he is 19 which is at the end of November, especially has he has only just returned. I do trust you will kindly see into the matter for me and oblige, Believe me, Yours Obediently, Mrs A Berry, Trusting you will reply and let me know.

One of Calais’ records which detail his postings and movement, tells that on the 30th September 1917 he had been at 62 CCS, classified as ‘Wounded Shell Concussion in the field’ The date of him becoming a casualty was 18th September 1917. Had he been wounded before as by the following day the above letter tells that Mrs Berry had already written to the War Office. Had she received the news very quickly and written two letters on the same day?

On the 24th July 1916 another letter from Mrs A Berry was date stamped by the War Record Office and the War Office Accounts, went on to say “Dear Sir, I am writing to you on behalf of my son, Gunner C Berry No. 41261, 186 Brigade, RFA Headquarters Staff. He has been on Active Service, and returned to England a fortnight ago suffering from Trench Fever and Vertigo. He is still very queer, he has suffered when a child with fits and general bad health and I his mother wish to prevent him returning on Active Service until he is 19, which will be at the end of November. I may tell you the Doctor who attended him in France told him not to return until he was nineteen. I am very anxious about him, so I trust you will kindly see into the case for me and let me know, for I sincerely do not want him to return until he of age. Trusting you will do your best, Believe me, Yours Obediently Mrs A Berry.

Gunner Berry, RFA was discharged from QAM HP Millbank on 4th July 1916 – could he have been sent to Ripon?

In 1917 Calais must have been back in Ripon as in April he was given 3 days CB for ‘having dirty butter on shelf in hut 26’. The following month he was absent without leave from 7th May 1917 to 9 am 9th May 1917 (9 hours). A soldier named O’Keefe was the witness, his charge could have been a repeat of 3 days CB.

Calais reported sick on 17th September 1917. On admission at 3 am ‘Unconcious; pulse 66, Temp. normal, Pupils equal, normal- except for slight sluggish reaction to light. Reflex normal, no injury of head detected. Signed off by W J Johnson, Capt RAMC 62 CCS Section 4 ‘I certify that the above named was subjected in the course of his duty to exceptional exposure of the following nature ………….On my way to the Battery position, a shell dropped very close to him. Again on reaching the Battery another Shell dropped quite close. This seemed to him a bit strange in his matter and he rapidly got worse and he was sent to the Field Ambulance. Dated 21/9/1 Signed off by J Harcourt Jeffers Lieut Major 220 Seige Battery RGA., classing Calais as ‘wounded Shell Shock Concussion’.

By the 11th of March 1919, Calais was giving his address as 81 Blondel Street, Calvert Road, Battersea. He had joined the army his medical grade was A1. According to his mother’s letters during 1916 she feels is no longer fitting that status.

A sheet of his service record informs of his hospital admittances/sick list – On the 23rd of June 1916 to 4th July 1916 Calais was in the Metropolitan Hospital suffering from Vertigo (12 days). The remarks section says ‘No Vertigo observed, Constipated’. On the 5th of March 1918 to 1st April 1918, he was admitted to the Red Cross, Wallasey , again for Vertigo (27 days). The following line tells that he was in The Western General, Fazakerley, Liverpool. The dates don’t appear to be in order as he was admitted on 20th February 1918 and discharged on 5th March 1918 – the same day he was at the Red cross? He was suffering from Heute Nephritis – did he go straight from one to the other? 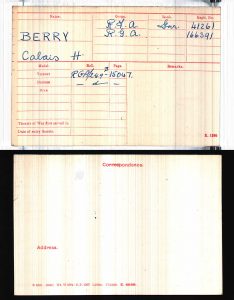 Did Calais go back to France? Did he survive the war?

Yes, he did return to France and survive the war. Initially going to France in March 1916, returning by mid-June of the same year. By the 31st May 1917, he was back in France, returning home on 20th February 1918. Serving once again ‘at home’ until 16th April 1919. He was demobilised on that day, being transferred to Class ‘2’ Army Reserve having served 3 years 242 days – most of which had been in England.

In the first few months of 1925, Calais married Grace Hobin in the Wandsworth Registration District. In 1927 there is a birth for a child born to Berry/Hobin – Olive A born in Lambeth. Before the war Calais had been working as a mill worker, by the time of the 1939 Register, now supporting his wife, he is District Manager, Scottish Legal Life Assurance Society. He is also a Special Constable Wartime with the Portsmouth City Police. Grace, like many other women, did Household Duties, was part of the Voluntary Aid Detachment. Home for the couple was 8 Wallisdean Avenue, Portsmouth.

In a 1954 Telephone Directory, Calais H Berry was living at 9 Auburn Road, Redland, Bristol. You could contact Calais by ringing Bristol 3-5426.