Recently I was given a leaflet letting me know of an art exhibition in Gravelines, Northern France.

Why was I given this leaflet? Well, it so happens that one of my friends has been asked to exhibit some of his oil paintings…………how good is that?

Who is my friend and the artist?

David Segrave is his name and he has a background in graphic art. He has family origins in Jersey and lives in the South of England but spends some of his time on the Chateau du Gandspette, where he has a small exhibition in the restaurant. His work is admired by those who either eat in the restaurant or step inside to visit the bar for a coffee or a cooling drink on a hot day. 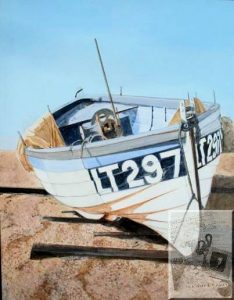 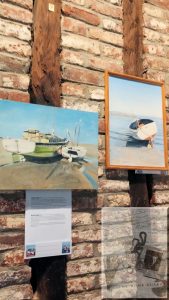 The exhibition opened in June and closes Sunday 27th of August with many local artists, including – Christian Beni, Grande-Synthe; Francois Wetterwald, Dunkirk, exhibiting in one of the 8 display areas. David will be displaying his art in the Corps de Garde Varennes, Place de l’Esplanade on the 26th and 27th of August 2017. The exhibition areas are open from 10:30 to 12:30 and 14:20 – 18:30.

If you are visiting Northern France during this time, you could do worse than spend a few hours visiting Gravelines and its eight pop-up galleries.