The other week I blogged about Archibald Gascoigne and mentioned that two of his brothers also lost their lives during The Grear War.  I also mentioned that a follow-up blog would come later.  It looks like ‘later’ has arrived a little later than expected!

Peter Herbert Gascoigne in 1917 and Edward Fairfax Gascoigne who accidentally drown while on war service, near Alert Bay, Canada.

Logic seems to take me to the first in the list – Peter Herbert Gascoigne.

Peter’s life in Wakefield very much mirrors that of his brothers until 1912 when he and his elder brother Frank travelled halfway around the world to start a new life in Adelaide, Australia. On the 11th of April 1912, the two brothers departed their home country bound for Adelaide onboard the P & O Steamship ‘Ballarat’ in 3rd class accommodation.  The brothers classed themselves as farm hands and travelled along with engine drivers, carpenters, dressmakers and maids.

Before his enlistment on the 28th of February 1916, Peter had been working as a labourer.  He joined the 50th Btn., Australian Infantry aged 23 years and 8 months. As he was in an Australian regiment, it could be classed as a boon for family historians as his service records were safe.  Australian, Canadian and American records – never having had to suffer damage caused by fire and water during the bombing of London during WW2,  In all there are 26 pages of Peter’s service records.  Each page is a moment in his service to King and Country and the Commonwealth.

Signature of Peter Herbert Gascoigne taken from his Attestation Papers

Page one of his Attestation Papers tells information we already know from the previous blog about his brother Archibald Gascoigne – his name, his birthplace, his next of kin (his mother in this case)  and something I find very personal and touching on all the records I look at  – his signature. Unique to him.

Although Peter’s service records are in no particular order I will try to put the events in the order that they occurred, well try!

Private 1682, Gascoigne Peter Herbert embarked from Adelaide, on board HMAT Aeneas on the 11th of April 1916 – practically four years to the day since he left his home country, he was returning but not to visit his family, he was going to war.  After training at Mitchem, England he was in Etaples, Northern France near the end of September 1916.

Before I tell you the reader a little more about Peter, let me describe him to you.  He was 5′ 6″ in 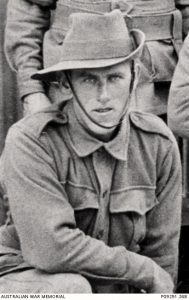 height.  He weighed 128lb.  His chest range was 33 – 36″.  His complexion was fresh, he had blue eyes and his hair was brown. He had two vaccination marks on his left arm.  His vision was R 6/6 and left 6/9. His dental examination – Peter had none of his own teeth, he had  ‘full sets’ of artificial. In the words of the Examining Officer, ‘This man should be referred to Special Board’.

It was on the morning of the 2nd of April 1917, that the 50th Battalion of the AIF attacked the village of Noreuil. A small village in the centre of a triangle between Bapaume to the south, Proville to the east and Arras in the north. Noreuil was at the time an outpost village near the Hinenberg Line.  The battle was a success but the costs were heavy with some 239 casualties.  It was on this day, the 2nd of April 1917, that Peter was classed as  ‘Missing in Action’. A few days later his status had been changed to ‘Killed in Action’.

Ada Gascoigne had already lost one son in 1915, she had bow lost another.  The only thing Ada received from Peter’s effects was his ‘Disc’. Ada signed a postcard confirming receipt of Peter’s disc, dating it August 11th, 1917 and duly posted to the return address – The Officer in Charge, The A.I.F. Kit Store, 110, Greyhound Road, Fulham, London, S.W.6.  Peter was eligible for The British War Medal and the Victory Medal, both of which would have been sent to Ada.  She would also have received a Memorial Scroll. 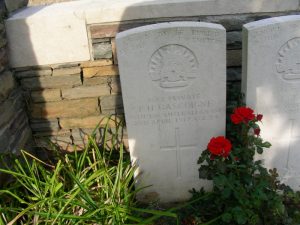 I think the most poignant thing sent to Ada, apart from Peter’s disc was a pamphlet entitled ‘Where the Australians Rest’.  Peter does rest, he is not remembered in name alone on a memorial wall, he rests in Noreuil Australian Cemetery, along with 218 other casualties, 83 being from the 50th Australian Infantry Battalion.

Peter’s brother Edward Fairfax Gascoigne seemed to be fairly invisible in his online presence for his time in Canada.  He was included with his family in a few online family trees where a few gave information about the place of his death.  But nothing about what he was doing in the war.  It is known that he was accidentally drowned near Alert Bay, Canada while doing some form of war work in lighthouses. It was while trying to elaborate on Canadian lighthouse keepers or workers in the Canadian Archives for the period around WW1 that a light flashed in the old brain cells! One website I had not searched was FamilySearch.  The site was able to point me toward original documents.

The first document was a marriage entry for him and Edith Marie Colwin, a widow aged 38.  Edith was the daughter of Charles and Susan Ward of Victoria, British Colombia.  The wedding took place by Licence on the 11th of October 1910 in St Barnabas Church.  Witnesses to the union were Walter B Colwn and Arthur W Plowman. Edward was 29 years old, having been born on the 15th of May 1881 and baptised in the All Saints Chuch, Wakefield on the 29th of June the same year.  His occupation was given as carpenter.

Edward had left England from Liverpool on the 7th of September 1907 onboard the Allan Line vessel ‘Corsican’ bound for Montreal, Quebec.  A manifest dated 27th of October 1914 for Victoria B.C. sees Edward now aged 33 working in advertising.  The date that he left Liverpool is confirmed, and his destination was now Seattle, Washington.  Edward had taken $125 with him on his trip to Seattle.  The document also gives a good description of Edward – 5′ 6″ in height.  Medium complexion.  Brown hair and blue eyes.  Does that remind you of anyone?

Edward and Edith had one daughter, Dora who had been born in 1917.  Edith had two children to her marriage to James Burgess Colvin, who she had married in 1890 – Walter and James.

With not a lot to say about Edward.  I had better let you know that Frank, who went to Australia with Peter, and lived until 1970.

One question remains to be answered!  Did the family resemblence of height, complexion, hair and eye colour along with build match that of Frank?  If you know, don’t forget to let me know.