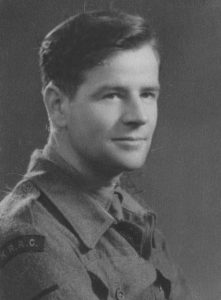 In 1940 my father, Henry Lawrence Dawkins, was 21 years old. He had joined the British Army in 1938. He had tried to join the Essex Regiment, like his father, but it was oversubscribed. He instead joined The Kings Royal Rifle Corps, an elite unit with a distinguished 200-year history. When the war began he was therefore fully trained. He was in B Company, 2nd Battalion, which was sent in May 1940, to defend Calais at the time the BEF was falling back to Dunkirk. With other units, British and French, the total force was around 4,000 men. Their objective was to hold Calais for as long as possible by holding back the advance of a German armoured division moving up from the south towards the Dunkirk area.

The following story was told to me by my father, over the years I was growing up in the 1950’s and 1960’s. As is so often with men of this era, he kept much to himself, and information came to me in short snippets and anecdotes. I have over later years, through book research and the internet, been able to put his story into the context of the broader history. He was a very honest and somewhat religious man, who was not boastful in any way, and therefore I have every reason to believe all he said was true.

He landed at Calais with his battalion on 23rd May. On disembarking, they could hear the shooting had already started. His Company, under the command of Major Poole, was sent to defend the western approaches to the town. They took up position on a railway embankment, and soon after were engaged with Germans approaching across the fields. This fighting was intense, with both sides already taking casualties. (Much later in 1965 on the 25th anniversary of the battle in Calais, which we attended, my father with a tear in his eye, confessed to my sister that he believed he may have brought down a couple of the enemy with his rifle fire. As previously stated, he was a religious man, a Roman Catholic, for whom killing even in self-defence would have posed for him a moral question.)

The following day, with the battle intensifying, his Company was withdrawn into Calais to defend some road bridges, that crossed the comprehensive canal network within the town. Meantime, Winston Churchill had communicated to Brigadier Nicholson, in overall command that there would be no rescue for the troops at Calais, and that they should hold on as long as possible to buy time for the preparations to be organised for the Dunkirk evacuation.

My father said a further fall back was ordered from the roadblocks after another day had passed. His company had repelled many German attacks by tanks and infantry, whilst occasionally being bombed and strafed by the Luftwaffe. They fell back to houses in the old town awaiting orders. Whilst taking cover in one such house, the Company second in command, Captain Henry Scott (see other entry on this website) ordered the men to tidy up the house. A seemingly odd request in the heat of battle. I suspect in this lull in the fighting, his idea was to keep the men busy to help morale. The troops most of which, like my father at 21 years were young had just gone through 2 days of hard fighting. Scott probably thought it better to not let the men be allowed to think too much about their possible fate. At 39, I have no doubt he was cast as a father figure somewhat by the men. After the cleaning up exercise, Scott ordered that the rubbish be thrown outside. He opened the front door, exactly as a German mortar bomb exploded adjacently. Father said he fell back into the house, mortally wounded. Major Poole radioed for a military ambulance. On arrival, the ambulance was machine-gunned by the Germans. Poole, who presumably had been given orders to move, but could not now evacuate Scott, who was by now, slipping in and out of consciousness, either detailed my father or my father volunteered, to stay with Scott, whilst the others moved on.

Just my father and Scott left in the house. Father said that Scott in his lucid moments told father to leave him and save himself. My father did not do this and loyally waited an hour or so till Scott passed away. This is one of those many quiet, unrecorded heroic events that must occur in all wars. The dedicated loyalty of my father to this well-liked officer, and Scott, almost certainly knew he was going to die, still having the welfare of one of his men in mind. After Scott’s passing, my father considered his own fate. Exit out the front door still impossible, he went into the backyard, which was surrounded by a 7-foot wall. My father being 5’6”tall wondered how he would surmount this. Whilst pondering his fate, a friendly voice was heard beyond the wall. Two of his comrades had returned. With their help, he got over the wall.

The next day it became clear the garrison could not hold on much longer and in the afternoon, the order was given ‘every man for himself’. Most of the Calais defenders, who had not been killed were captured. They aided in the clean up of Calais, which the German’s organised. One darkly humorous anecdote of my fathers was how difficult it is to bury a horse. Horses were war casualties as well as men. He said it does not matter how large the hole is, there is always one horse’s leg which will not fit.

My father, now a Prisoner of War, was marched with his comrades, the 600 miles to eastern Germany. They were often pelted with rotten vegetables by German civilians on the way.

He was held at Stalag 8B, a large prisoner of war camp, with some 10,000 plus inmates of all nationalities. The camp was situated in the Lamsdorf area, not very far from Auschwitz. There were British, French, Dutch, Belgians, Poles and Russians in this camp. Unlike officer camps, which under the Geneva Convention excused men from working, all other ranks of POW’s were used as slave labour. Father and many of his comrades were made to work on the construction of a vast oil shale plant. The German’s did not have a reliable source of oil and therefore were keen to develop this resource.

He said the German camp authorities tended to treat all the nationalities differently. British, and later American prisoners were treated reasonably well, in the circumstances. Other western Europeans, such as the French and Dutch slightly less so. People from the east, such as Poles and Russians were at times treated very badly. There were, at the beginning, many Jews within the ranks of the various captured allied soldiers. My father said that over time they ‘disappeared’ never to be seen again. He said that a few of the German guards became friendly with the POW’s, chatting and exchanging cigarettes. They were usually the older men, second line troops, who hated the war as much as the prisoners.

The SS periodically inspected the camp. On one such occasion, a group of four SS officers in an open-topped staff car sped through the camp. Father did not see them until the last second, and as he jumped out of the way, the car’s wheel caught his ankle, and he fell to the roadside. The car slowed and stopped, and he thought for a second knowing the reputation of the SS, that one of them might choose to shoot him for ‘obstructing’ their car, but all four officers turned their heads towards him, laughed, and drove off.

Work on the oil shale plant continued. Then in late 1944, the plant was nearing completion. The Germans planned a big opening ceremony. About a week before, some prisoners heard the distant whine of a single aircraft, very high in the sky. This was unusual so deep in Germany. A couple of days before the ceremony the Germans erected a good luck ‘Christmas Tree’ on the highest tower of the plant. The significance of the lone aircraft became obvious the next day – it had been on a photo recon mission. It appears the allies were just waiting for the plant to be finished because on this fateful day the United States Army Air Force totally flattened the whole installation. Many POW’s, particularly craftsmen such as bricklayers who had worked on the site for the Germans, wept when this happened – it was still their work and their pride in their work destroyed. People often react strangely, to our eyes, in these stressful environments.

During his time there, my father nearly died from rheumatic fever. We only found this out by chance, many years later after he had died, when my mother met a woman whose husband had been in the same camp and remembered this. As a Catholic, he had been read the last rites, but still pulled through. He never told my mother this, although they were together for 35 years before he died.

They knew the war was not going well for the Germans, for one day in the spring of 1945, all of the prisoners were told the camp was to be evacuated. They were soon marching west, away from the Russian advance. This became known as the famous Death March. The cold and exhaustion took their toll. Many POW’s who could not keep up, were too tired or too ill, were shot and left at the roadside. Each day more of the German guards disappeared until in the end thousands of men were being guarded by a handful of Germans. Then they were all gone. The prisoners saw tanks advancing towards them, American tanks. Can you imagine that day, after 5 years of many near-death situations and the constant uncertainty of it all? The Americans took small groups of POW’s to all the local German houses, telling the occupants to feed them and let them use their washing facilities. The German civilians now were only too willing to cooperate.

After the war, it would not have been surprising if he and his comrades had suffered PTSD. I’m sure many did but stoically bore it, in the knowledge that they had survived. I think in my father’s case, the years of deprivation and stress had taken their toll and contributed to his relatively early death at 61 years in 1980.