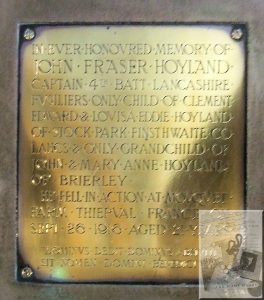 It is known that if you are remembered on a plaque inside a church, you are more than likely dead. Some who are remembered on those plaques have lived a long and fulfilling life, while others, their future was cut short. Their dreams not fulfilled or their potential never achieved.

John Fraser Hoyland was one of those whose life was cut short. The memorial remembering John is secured to the stone wall inside the beautiful church at Felkirk and reads

John being killed in action must have been such a devastating loss for the family – an only child and only grandchild – a families future, gone forever.

To go back to happier times for the family.

Clement Edward Hoyland had been brought up at Brierley Lodge. He attended Uppingham School, followed by Trinity College, Cambridge and gained employment as a mining engineer. He married Louisa Eddy Fraser in St John’s Episcopal Church, Forres, Morayshire, Scotland and brought her south.

In 1901 Clement and Louisa were living at Shatton Lodge, Embleton, Cumberland. He gave his occupation as ‘living on his own means’. John Fraser was not with his parents. Where was he? He was a boarder at the High School, Keswick. 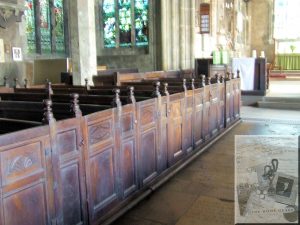 John Fraser Hoyland was baptised on the 1st of July 1895 in the church at Felkirk, while his parents were living at Ravenfield Cottage, Rotherham.

When the census of 1911 was taken Clement and Louisa were staying at Grange Hotel, Grange over Sands, while their son was a boarder at Malvern College. While at the College he became a House Prefect and was part of the Shooting 8 1913-1914. A sound reliable boy, the College classed him as an excellent leader and a good shot. On leaving the College he secured a commission in the Lancashire Fusiliers.

John’s rank was 2nd Lieutenant when he entered France, which must have been before 1916 as he was eligible for the Star, the British and Victory Medals. His service records confirm this, by telling that he went straight into the army from school and had seen service in Surla, Imbros and in Egypt. 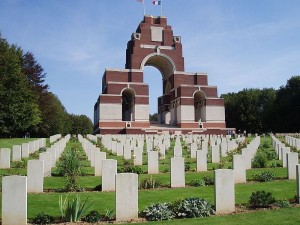 John was reported missing in October 1916 and presumed killed in action – according to his College. The Commonwealth War Graves Commission has his death date as 26th September 1916. He is remembered on the Thiepval Memorial to the Missing near Picardie, France. Probate for John’s estate was left to his father, Clement Edward Hoyland, gentleman – the sum of £285 12s 10d. His father on the other hand when he died in 1951 left £44623 15s 3d to The Midland Bank Executor and Trustee Company Ltd., Arthur Herbert Moss and Charles Edward Copley. Chartered Accountants.

By the time of his death, John Fraser Hoyland had been promoted to the rank of Captain. His entry in the Register of Soldiers’ Effects informs that he died ’28. 9. 16 on or since’ and that the sum of £148 9s 11d was due to be paid.

After his son’s death Clement, in November 1920, applied for the medals relevant to his sons service, which was sent in January 1921 to Finsthwaite House, Ulveston.

The family seems to have been well connected with a variety of houses connected to the family including, Stock Park, Ulverston; Brinkworth Hall, Elvington; Finsthwaite House, Ulveston; Brierley Hall, Yorkshire; Shatton Lodge, Embleton and Felkirk Vicarage.