After being in France only a fortnight, Pte. Arthur Moorhouse, of the 10th Batt. York and Lancaster regiment met his death in the battle of Loos. He was 23 years of age, and lived in Warrengate, Wakefield. Pte. S H Whitehead, of the 10th Batt. K.O.Y.L.I., who lived in Pinderfields Road, Wakefied, has died of wounds. He was only 18.

“While ever someone says my name, I did not die”.

Firstly, Arthur Moorhouse, for no other reason than he was mentioned first in the Sheffield Independent article dated Saturday 16 October 1916. With only a name and a regiment for me, there is only one place to start – The Commonwealth War Graves Commission website. I’m starting there due to the fact that in the census, although, the newspaper says he was from Wakefield, he may not have been born there and there is an awful lot of Arthur Moorhouses dotted up and down the country, plus he may not have lived at his address in Wakefield for long. For me, the CWGC website will give back more information than I have to input to find him. Luckily there are just 9 Arthur Moorhouse’s in their records. If he had not been there it would have more than likely meant that his first name was cut short to just an initial. Luck was on my side! Well, somewhat on my side.

With one search, there he is. Moorhouse, Arthur, Private, 19770. York & Lancaster Regiment. Died Sunday, September 26, 1915, and that was it. No next of kin attributed to his entry. I do, however, know more than I did a few minutes ago.

Next recordset. The Medal Cards. This set tells, obviously, which medals Arthur’s next of kin were able to apply for – Pip, Squeak and Wilfred. The theatre of war in which he fought is given as France along with the date of 10 September 1915 when he arrived. His death date is given as ‘KinA 26.9.15’.

On to the next search, this time, Soldiers Died in the Great War (SWDTGW) – there he is. I find this set of records very informative as they can tell quite a lot if there is no surviving Service Record, as in Arthur’s case. Anyway, I’ve still not looked at a census, hopefully, this could lessen the search when I get there. It seems that Arthur was, according to SWDTGW, born in Scarborough and moved to Wakefield sometime after. We know his date of death, so that’s nothing new, but what I didn’t know was that he enlisted in Pontefract. Most of the other information was already know but one little gem of information stood out – Arthur had previously served as 18488 in the Yorkshire Light Infantry – bonus!

On to the next set of records – the Army Registers of Soldiers’ Effects and with the absence of a service record this can give, hopefully, a next of kin. I am not let down, there it is written in dark blue ink ‘Mo Betty’ (mother Betty) followed by confirmation in bright red ink ‘Mo Sole Leg Betty’. Betty was to receive in 1916 the sum of £1 11s 2d, followed by a War Gratuity of £3 10s in 1919. 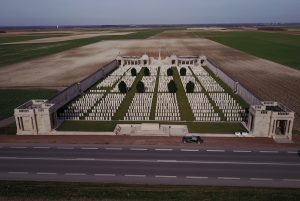 Not a lot for the life of a son. Sadly, the family, like many others, have no place to mourn. No headstone to include a private tribute to a fallen son. Arthur is remembered on the Loos Memorial with over 20,500 casualties with no known grave. The site is also the final resting place for many, many Commonwealth soldiers who are marked with the well known CWGC headstone.

I’d looked at my usual record sets, with only one not visited yet. I was dithering thinking, no he would not be included there, but as I used to tell to my class a few years ago, it was always better to have a look and waste a few minutes and find nothing, than miss something that could be of use later. So with my voice ringing in my ears, I followed my advice. I am so glad I listened to myself and visited the WW1 Pension Records.

I wondered why good old Ancestry had opened up on a page in the middle of a set of records, but they were records of a Moorhouse of 23 Warrengate, Wakefield. Betty was there as the mother. Whose records were they? Time to scroll to the beginning. Well, that was a shock as I found who the record was for and continued reading the pages – he was a bit of a character. These were the records of Fred Moorhouse, the elder brother of Arthur. Fred seems to warrant a blog all to himself. Anyway, Arthur is there, in these records, mentioned as being relatives of Fred.

So much has information has been gathered as a result of a few lines in a newspaper – not even a local paper, at that!

It’s census time – 1901. 33 Georges Square is home to Betty and her family – Esme aged 16; Frederick, aged 12; Arthur, aged 8 and Ezekiel, aged 7. There I one other brother, William but he has left home. Betty, the head of the house, tells the enumerator she is a single woman working as a worsted spinner. Do you remember when I looked at the SWDTGW and Scarborough was given as Arthur’s place of birth, well that now differs – Alverthorpe is now his place of birth. But could that have been confused with New Scarbo’? Who knows?

Ten years later things all change. Betty is now a 53-year-old widow working as a shopkeeper on her own account (from home), born in Ossett. William is a pipe fettler in an iron foundry, born in Wakefield and Ezekiel is a wetter off in a local glassworks, again born in Wakefield. Home is 23 Warrengate, three-roomed house. Betty did not complete the compulsory form herself, A Reed, was tasked with the job. Who was A Reed? Was he a friend, a neighbour or even a relative?

Betty, was she a widow or a single woman? Whichever, she had born 13 children and sadly lost half of them before the 1911 census. Could Arthur baptism entry answer this question? Yes, it does and answers another question I asked earlier. In Alverthorpe parish on the 24th of July 1894, Arthur was baptised along with his younger brother, Ezekiel. Arthur had been born on in February 1891 with his younger brother following on May 10 1894. Betty seems to be the only name recorded on these entries – I’m leaving you to make your own conclusion. But home was New Scarboro’!

I don’t want to go off on a tangent and take away anything Arthur, I do that a lot? But it seems that Betty and Fred also have a story to tell.

The first paragraph of my ramblings give you, the reader, the sense that another person is to be mentioned, Private Whitehead, was that second soldier but alas, he will also have to wait a little longer to have his story told.