From George Street to Upper Kirkgate

In 1967 a friend of my father, a Mr R G Pearson or Pawson made a list of the shops on Kirkgate from 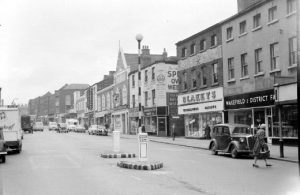 Kirkgate – opposite side of the road copyright info

the junction with George Street to the junction of Upper Kirkgate.  I found the names shop titles fascinating and evoked wonderful memories of the area.

“Demolition work commenced in Kirkgate from George Street to the corner of Upper Kirkgate, (on the west side) in mid-September 1967.

Prior to this when George Street was widened the corner shop of Kirkgate and George Street, was that of Mr Fred Wood, the Sadder, this was demolished, and it was thought to be the only Sadlers shop in the country to have a Wind and Spirit Licence.

Therefore when demolition started in September 1967 the following is a list of premises affected from the corner of George Street:- The British Oak, a public house; Sammy Herbert’s Fish and Chip Shop; Wakefield Radio Co.; The Spinning Wheel, Wool Shop; Hoffman, Confectioners; The Wool King – then an entry into the car park, with a Police Box on the corner (This entry was made by demolishing two shops). Then Malcolm’s Flower Shop; Wormald’s Butchers; Progress Butchers – then a passage.  Halford’s Cycle Shop; The Criterion, public house.  Then an entrance into a yard.  Scarr’s Hardware Shop; Morton’s Post Office; Dewhirst Butchers; The Double Six, public house; Kay’s, gents outfitters; King’s, gents outfitters; Hilton’s, boot and shoe shop; Cavendish Furniture shop (Once Jackson’s Arcade). Another shop occupied by Halford’s (after they left their shop previously mentioned.  The Army Stores, and before that Isherwood’s Radio and Television.  Entrance to a yard.  Timothy White’s, chemist; Leicester and Kettering, boot and shoe shop.  Pickles, gents tailors.  Then Kirkgate Corner.”

So many memories, On a Saturday after shopping it was occasionally fish and chips from Sammy Herbert’s.

One of my school friends lived at the Criterion public house which was run by her parents.  Inside the place was a rabbit warren of rooms, you could easily get lost.  I also remember the man from Wakefield Radio, he had a very large German Shepherd dog who I seem to remember sat a great deal of time in the entrance of the shop.  Timothy White’s and Scarr’s are also vivid in my memory, as is a gents shop, I remember going there with my father – something to do with the fact they would order military blazer badges and re-ribbon medals.