As Frank was the only one of the soldiers included in the Memorial Service article (see previous entry) to have his Service Record survive the ravages of The Blitz during WW2 it seemed appropriate to tell about him in a separately.

As I said in the previous entry, Frank was the only soldier whose Attestation papers had survived. So when looking at these records, what can we find out about him?

Frank of 32 Montague Street, Agbrigg Road, Wakefield, was aged 18 in 1916 when he attested before Sergt. J Williamson at Pontefract on the 9th of September 1916. Frank worked as a cloth dresser, probably in one of the local mills. At 5′ 4″ in height and a 33″ chest, he was still much more a boy than a man. On this recordset, Frank had included his father as his next of kin.

The following pages tell more of Frank’s army life. He was mobilized in December 1916 and posted to a Training Battalion in February the following year. Finally, becoming part of the BEF (British Expeditionary Force) in February 1918. As a result of this, he was now part of the DLI (Durham Light Infantry).

It was just over one month later on the 22nd of March, 1918, that Frank, like many others before, was Killed in Action, ‘in the field’. In short, Frank had only been in France for five weeks but had served for one year and 35 days. 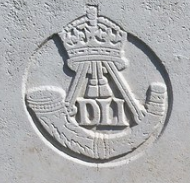 Turning the pages of Franks Service Record, which are not in date order, it is now possible to find that he weighed 105lbs. There were four vaccination marks visible on his body, and his eyesight was good.

Like many other soldiers during this period in military history, Frank had a series of service numbers. At enlistment, his service number was TR/5/65657. Upon entering the Training Reserve Battalion, it changed to 3221, followed finally by 75515.

While based at Hornsea in May 1917, Frank seems to have been absent for one day – for this he was admonished and forfeited one day’s pay. Following his time in East Yorkshire, Frank moved on to Rugeley, before embarking from Folkstone for France.

Late in October 1918, Ann, Frank’s mother was granted 6s 4d Separation Allowance. Ann completed a form which required her to list Frank’s parentage along with full blood and half-blood siblings – Frank had five full blood siblings ranging in ages from 17 to 38. 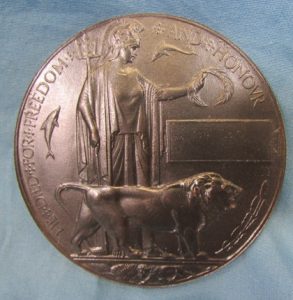 As Frank, had been Killed in Action his parents would receive quite a lot of paperwork from the Army. One of these letters would be to acknowledge receipt of a ‘Death Penny’ and Scroll.

Frank, like Robert Elvey, rests at Poziers, but unlike Robert, Frank has no known grave and is, therefore, remembered on the Pozieres Memorial to the Missing.

St Catherine’s would have been the Hodges family church, and I presume that Frank’s name would have been recorded on their stone war memorial. The memorial survived a terrible fire at the church but sadly did not survive being damaged by one of the workmen working on the fire ridden church. The workman, driving a lorry, reversed over the memorial which had been placed flat on the floor for safety. The result was, as you can guess, unsalvageable.

Frank, had been born on the 18th of September 1898 and baptised the following month in St Catherine’s Church.

Frank, in his short life, is found in two census – 1901 and 1911. In both census Frank, his parents, James and Ann, and his siblings are living on Montague Street. Some of his older siblings by 1911, have left home to start their own lives.

Frank’s father, James died in 1925 followed by his mother the following year.