While looking through the pages of a 1918 newspaper I came across the following article and I became curious as to who these men were.

A Memorial Service was held in St Catherine’s Church on Sunday afternoon last, in memory of Robert Elvey, Arthur Harrison, Joseph Harold Walker, Willie Bolton, Frank Hodgson, and George Wilkin, gallant soldiers who made the Great Sacrifice on behalf of their Country. The service was attended by the relatives of most of the soldiers, and a large number of parishioners came to pay their tribute of sympathy and respect. The service, taken by the Vicar (Rev. W Mahon), was simple, impressive and moving, and the draped National Flag seemed t add to the occasion. Three hymns, “My God my Father, while I stray.” “Now the Labourer’s Task is o’er.” “How bright these Glorious Spirits Shine.” were sung; and the organist (Mr J J Capewell) played Chopin’s Funeral March, Liebe’s Requiem, and Malan’s “Oh Lord my God, hear Thou the prayer thy servant prayeth.”

Let me see if I can find out who these Wakefield lads were when they lived and breathed and walked along our local streets. 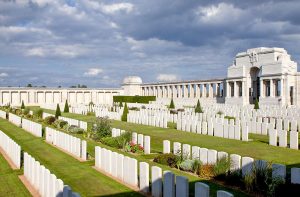 Pozieres Cemetery and Memorial via Wikipedia

Firstly, Robert Elvey. During the Great War, after enlisting in Wakefield, he served as Sapper 480716 in 157th Field Company, Royal Engineers. Robert had also served under another service number, T4325. He died on the 25th of March 1918 and rests in Pozieres CWGC Cemetery, France. The Probate entry for Robert tells another snippet of his life – it tells that he lived at 59 Regent Street and that he left a widow, Annie who would have inherited the sum of £469 17s 2d. She would also have received his medals – The British and Victory Medals and a ‘Death Penny’ and Scroll.

Robert had married Annie Kendall in 1915. But let’s go back a few years to 1911 when Robert is living with his parents, Arthur Ed. Elvey aged 46 a Teacher of Pianoforte, and his wife Eleanor Theresa. Robert was one of four surviving children out of 7 born to Eleanor. Robert at this time was 21 years old and earned his living as a bricklayer.

Arthur Harrison is next in line.  After determining which Arthur Harrison was mentioned in the newspaper – there was a few!  This was done by browsing the CWGC (Commonwealth War Graves Commission) website.  I found he enlisted in Wakefield, joining the Yorkshire Hussars (Alexandra, Princes of Wale’s Own), 13th Battalion. He was known as Private, 24657, Harrison, Arthur.  He was Killed in Action on the 24th of November 1917.  Arthur is remembered on Panel 5 of the Cambrai Memorial to the Missing, Louverval, France and is one of over 7100 whose final resting place is known only unto their god.

Arthur enlisted in Wakefield after 1915 and was only eligible for the British and Victory Medals BUT he had been awarded the MM (Military Medal). Arthur’s money owed from the Army was War Gratuitypaid to Mrs Bessie Underwood, his sister. This money included £9 War Gratuity.

Joseph Harold Walker is next in line. According to the CWGC, only one entry fits the bill. Joseph was the son of Walter and Emily of Wakefield. Joseph served in the 1/5th KOYLI King’s Own Yorkshire Light Infantry as Private, 242886. He enlisted into the KOYLI’s in Wakefield. The 1/5th Battalion was a Territorial Battalion.

Joseph would have been awarded the British and Victory Medals and his Medal Card also tells that he had served under another service number – 5136. Emily, his mother was registered as his next of kin and was, therefore, granted monies from the Army including £9 War Gratuity.

Joseph died on 3 of February 1918 aged 34. Joseph rests in Anzi -St Aubin British Cemetery in Northern France with 360 other servicemen. After his burial and erection of his memorial stone, his parents had the inscription “Rest in Peace” at the base of his headstone.

Willie Bolton follows on from Joseph. The CWGC has information on two Willie Bolton’st only one died early in 1918. Willie served in the 9th Btn. of the KOYLI as Private 15271. During his time as a soldier in The Great War, he had been awarded the MM (Military Medal).  The medal being established in 1916 but could be backdated to 1914.

Willie like the other’s remembered in the service enlisted in Wakefield. Willie seemed to have served the longest of the men mentioned so far. He entered France in May of 1915 which made him eligible for the 1915 Star, the British and Victory Medals – plus his MM. Any money owing to Willie was sent to his mother as his next of kin. She was also sent £17 War Gratuity.

Willie has no known grave and is therefore remembered on the Tyne Cot Memorial to the Missing with over 35000 recorded names of other missing brothers in arms.

Frank Hodgson is the penultimate name and the only soldier I can find a service record for. I have decided that he will have a section on his own.

Finally, George Wilkin who sadly at the moment I can’t find anything that positively identifies him.