There are a few cemeteries that evoke little or any emotions within me. While the headstones do or can tell wonderful tales. But the majority of cemeteries and kirkyards that I’ve visited in Scotland bring over me a sense of calmness – now is that because I’m in Scotland?

Another headstone within the strong walls of Urquhart cemetery is also telling a tale of tragedy. Possibly with some villagers remembering the terrible plight of Alexander Gillies in 1886 who left a wife and four children.

This is the story of Constance Leslie.

Constance was born on the 26th of April 1910 at Parkes of Innes, Urquhart. She was the daughter of James Leslie and his wife Isabelle Pirie.

Park of Innes via nls maps

Isabella had been a nurse then changed her occupation that of assistant art teacher working at Elgin Academy.

Eighty-five years ago in 1936 Elgin Academy was on a different site. The academy Constance would have been familiar with was on the current site of Moray College with a previous building been on the corners of Academy Street and Francis place. In 2012 the academy opened the doors of its new building on Morriston Road. Elgin Academy is the largest school in Moray and has historical links back to the Middle Ages.

After a full day at work, Constances headed for home on her pedal cycle, a journey of just over five miles and would probably have taken just over 30 minutes.

On the 14th of January 1935 what made this Constance’s last day at school?

Constance at the junction of the road to Tyockside Farm and the main road north, collided with a car driven by Mr Rose.

The Dundee Courier on the 15th of January ran the following:-
Scots Art Teacher Fatally Injured. Elgin Road Tragedy.
Miss Constance Leslie (24), an art teacher at Elgin Academy, was fatally injured in a motor accident near Elgin last night.
Miss Leslie who was cycling to her home at Urquhart, was involved in a collision with a car a the junction of the road to Tyockside Far with the main north road. The car was driven by Mr A J Rose, timber merchant, Woodview, Garmouth, who was accompanied by his wife and son. They escaped injury.

The Dundee Evening Telegraph of the same date informed:-
Scots Teacher Killed on Road.
Miss Constance Leslie (24), an art teacher on the staff of Elgin Academy, was killed instantly in an accident east of Elgin.
Miss Leslie who was cycling to her home at Urquhart, was struck by a car which emerged from a side road on to the main road near
Tyockside Farm. She fell heavily on her head.

The Scotsman of the 17th of January 1935, corrects a previous issue and contradicts one of the Dundee newspapers. It looks like one of the papers was syndicated and ended up with slightly wrong information. Well, what is new!

Elgin Woman Teacher’s Death in Accident.
Miss Constance Leslie, an art teacher on the staff of the Elgin Academy, who was killed in an accident east of Elgin on Monday night was cycling from a side road on to the main road when she was struck by a passing car. The car was not, as stated in the report which appeared on Tuesday, emerging from a side road; it was on the main road.

The following month – The report of an inquiry in The Aberdeen Press and Journal of the 16th of February, 1935 gives a little more information. The main Elgin road seemed to have seen quite a bit of tragedy during January, as not only Constance lost her life but a young man aged 20 was also fatally injured. James Anderson, clerk of 20 Gordon Street, Huntley, was in early January riding his motorcycle from Elgin to Lhangbryde, and who at the junction of the road leading to Orton, overtook and crashed into a motor bus belonging to Elgin and District Motor Bus Company, about one mile out of Elgin. The bus was being driven by Alexander Fraser of 16 South College Street. James Anderson received instant fatal injuries. A witness to the event told that he thought James Anderson would have been travelling at about 45 – 50 mph. Which the witness thought was far to fast, in his opinion as it was a night with a drizzle of rain.

The report continues and says that Mr Fraser, the driver or 16 South Street, told that he could not remember what traffic passed him on that night, but he did always keep an eye on his driving mirrors. Another witness, Mrs Jeannie Henderson or Ross, Oldshiels, Lhangbryde remembered hearing the roar of a motorcycle just behind the bus near the Orton Road. She also said that there was a light below the bus window for a minute then sparks.

Elgin Woman Teacher’s End
The second inquiry related to the death of Miss Constance Leslie, assistant art teacher, Elgin Academy, and residing at Parks of Innes, Urquhart, who when emerging on a pedal cycle from Tyockside Road on to the main Elgin-Lhangbryde road, on the night of January 14, was in collision with a motor car being driven towards Elgin by Alexander James Rose, wood merchant, Woodview, Garmouth, receiving injuries from which she died instantaneously.
The driver of the car, Mr Rose, said the cyclist came right out on to the middle of the road. He swerved the car as fast as it was humanly possible for anyone to do in order to try and avoid her, but contact took place about the centre of the main road.
Mr Rose said he tried to right the car, which took the bank at the right-hand side and toppled over after it stopped. He came out through the wind-screen, which was smashed, and found the girl lying about a car length behind the car.
In further answer to Mr Shiach (procurator-fiscal, conducting for the Crown), a witness said that any person coming out of the side road should have seen the reflection of the car’s head-lights through the trees.
After hearing other witnesses the jury, as already indicated, returned a formal verdict.

The Scotsman 16th February 1935.
Elgin Fatalities: Drivers Exonerated.
Both drivers were exonerated from blame at a public inquiry at Elgin Sheriff Court yesterday into the death of Constance Leslie (24), an assistant art teacher at Elgin Academy, and James Anderson, (24), clerk of Gordon Street, Huntley, who were killed in collisions with a car and a bus respectively. Both accidents occurred on the main road east of Elgin at points a little over a mile apart. The jury returned formal verdicts in each case. 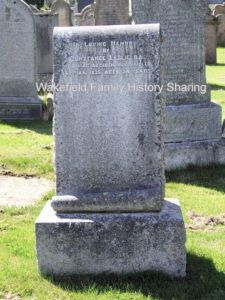 And so the headstone in the shape of a simple scroll standi ng on a solid base bears only one name – In loving memory of Constance Leslie. D.A. who was accidentally killed 14th Jan. 1935 aged 24 years.   The single name and inscription has truly told an interesting tale.