Notes on the Parish and Lordship of Urquhart

Family historians and One-Name Study researchers love names.  The more names the better chance of finding the name you want.  Well, I hope this transcription, albeit a little on the long side, will give a few names and places to fellow researchers.  Yes, I know it’s long but there are some interesting snippets in there.

Urquhart was formerly a cell or priory belonging to Dunfermline, and was founded by King David 1 in honour of the Blessed Trinity in the year 1124, as appears from the Chartulary of Moray.

Richard, prior of Urquhart, subscribed the fixing of the Cathedral of Moray at Spynie, and the foundation of eight canons settled there by Bishop Bricius, brother to William, Lord Douglas, in the reign of William the Lion.

Thomas, prior of Urquhart, was present at a Synod of Andrew, Bishop of Moray, held at Elgin in 1232, and was sub-legate for composing a difference betwixt Bishop of Moray, and David de Strathbogie.

Robert, prior of Urquhart, was present at a Synod called at Elgin in 1369 on a question of tithes.

The Lordship of Urquhart belonged to the priors of Pluscardine and soon after the Reformation the estate of the priory was erected into a temporal Lordship in favour of Sir Alexander Seton, then created Lord Urquhart, and afterwards Earl of Dunfermline, and upon forfeiture of that family, was acquired by the Earl of Callendar, who assumed the title of Dunfermline.

The grant of the Lordship of Urquhart was burdened with payment of a feu-duty to the Crown of 550 merks Sc., as also with considerable portions of their estate in the parish or Urquhart to different persons – particularly Over and Nether Mefts, Leuchars, Threipland, Lochs, Binns &c., and the feuars continued to possess, only paying their feu-duties to Lord Dunfermline in place of the Church. 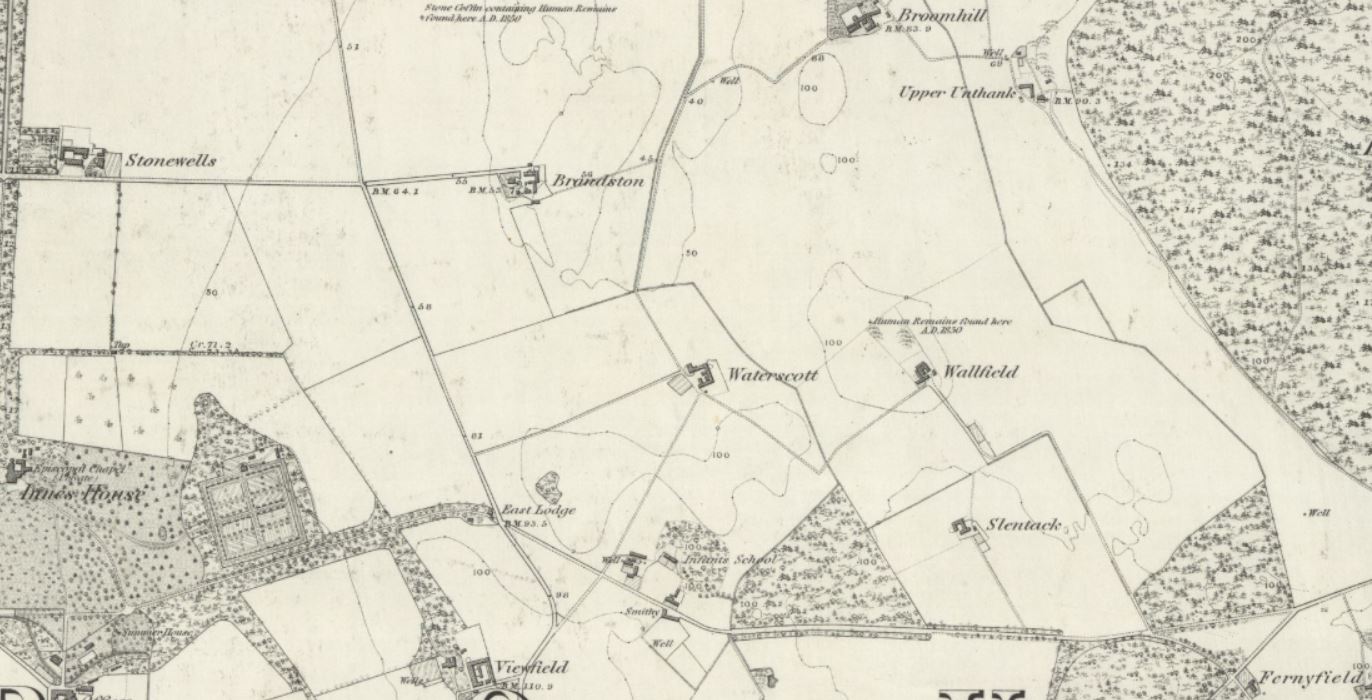 The following notes are taken from original MSS, and other documents now before the writer:-

1)  In 1685 a precept was issued at the instance of James, Earl of Dunfermline, Lord Fyvie and Urquhart, and Lord of the Lordship and Regality of Urquhart and George Gordon in Garmoch, bailie principal of the said Regality against the feuars and tenants of the Lordship of Urquhart anent the Cess. James Caler of Muirton and William Duff, elder, and William Duff, younger, merchants in Inverness, tacksmen of the Lordship of Urquhart, had obtained decreet before the said bailie against John Innes of Leuchars, David Stewart of Upper Meft, John Farquharson of Binns and Nether Meft, Robert Innes, portioner thereof, John Taylor of Maverston, John Duncan portioner of Nether Binns, John Russell, portioner thereor, James Flytter of Gladehill, Margaret Hamilton, L#liferentris of a portion of Nether Binns, Archibald Geddes ad Alexander Gordon of Loch, and James Brander, portioner of Urquhart, John Dunbar and Alexander Stronoch, portioners of Finfan and Walter Chalmer of Threpland decerning each of them to make payment to the said tackshman, for relief of the new Supply granted to the king by Act 3, third Parliament of Charles 11 viz., each of the foresaid persons as vassaks and feuars and as gentlemen above the quality of tenants for themselves, wives and children £6 Sc., and each of their tenants and subtenants, cottars, and grassmen residing within the said lordship £4 Sc., for the tenant and 20s for each of their subtenants, cottars and grassmen, tradesmen and servants and that yearly since Martinmas 1693. The foresaid tacksmen obtained decreet before the said bailie against Alexander Anderson, tacksman of Longhills mill, Archibald Brander, tenant in Urquhart, John Brander, younger, tenant there, John Brander (alias Chief), tenant there, Michael Maver, tenant there, Alexander Innes, and Mr James Gordon tenants there, William Simson, elder and younger, tenants in Tyres, Henry Innes, tenant in Binns, Lachlan Innes, tenant in Unthank, James Young, tenant in Hillside, David Maver and Margaret Ragg, tenants in Hills, Robert Farquharson, tenant in Fosterseat, James Robb, tenant there, Janet Allan and Alexander Laing, tenants there, and Robert Chalmer, tenant in Tipperlair decerning them as tenants to make payment of £4 Sc., each yearly and each subtenant, &c., 20s Sc.

The precept as “given under the subscription of John Kemptie nottar publict, our clerk of court of our said Lordship and Regality of Urquhart, at Urquhart the twentie fourth day of November 1685 yeirs.”

The lordship of Urquhart, including the feu-duties payable by vassals, was sequestrated by the Court of Sessions in 1707, and William Sutherland of Roscommon was appointed factor thereon. By a judicial rental taken by him it appears the rent, after deduction of stipend and schoolmaster’s salary, was £174 12s 8d and 191 bolls 1 firlot 1 peck victual, equivalent in all to £873 6s 8d. After deducting the feu-duty to the Crown, there remained f free rent £506 13s 4d. By a rental of the parish of Urquhart given in by the minister in 1766 in a process of augmentation he was then pursuing against the heritors it appears the gross rent of the property lands of the lordship of Urqhuhart was £216 12s 4d Sc., and 179 bolls 3 firlots victual, equivalent in all to £965 11s 6d.

The following list was drawn up in 1773, and gives the names of the lands lying in the Lordship of Urquhart:-

Part of Urquhart via NLS maps

From a particular account of the rental of the whole parish in 1776, as given by the heritors it appears that the total rental was 2529 bolls victual and £1737 s 4d in money. The Duke of Gordon then possessed the Milnlands, Woodside, Hillside, Bawds, Unthank, Byres, and Maverston. John Gordon of Cluny was proprietor of Over Binns, while William Ogilvie of Pittensear owned Nether Binns and Threipland. Finfan belonged to Alexander Tod, Lochs to James Fraser, Gladhill and Tippertail to Ann Stewart, relict of James Anderson of Mathie Mill, Leuchars to John Innes, the Mefts &c., to Sir James Innes, and the lands of Germach, Mathie Mill and Corskie to Lord Fife and Ann Stewart. There were several other proprietors.

An interesting old document, of twelve pages foolscap in possession of the present writer gives “Ane just rentall of the Countess off Dumfermling and Callander he la…. thirds, my Lord Dumfermling hjaueing the two partis as also th rentall of the Lands of Forresterseat wherof my Lord hes no pairt. And that for the heire 1659.”

The following were the names of some of the tenants for that period:-

The sum of the whole third part of the victual was 11 chalder 15 bolls, of the money £147 17s 2d also £246 13s 4d, being the duty of Forresterseat, also about 17 capons, 17 poultry, 2 wedders and a third part of two hens. The Rental is doqueted at Linkwood and Elgin by the Earl of Callendar and his Chamberlain Nicholas Dunbar, before these witnesses, Norman Livingstone of Milnehills, Alexander Anderson in Garmoche. And William Monteith, servitor to the said Noble Earl.