As I’ve said before, family history friends are the best. Not forgetting the family of family history friends! I was recently given a little wooden cross by one of these friends. It is nothing extraordinary to look at. It does, however, become two separate sections – the cross detaches from the tiered base. Was it meant to be portable? Or, has it over time become two pieces? 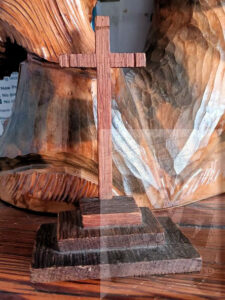 This item is supposed to have been made from debris wood as the result of the Hartlepool Bombardment. It was said to be from World War 1. Was there a bombardment during this time? I know from my family history that Scarborough was bombed in the later war, WW2 – close relatives of mine were killed as a result of a direct hit on their house. The house was destroyed. My dad used to tell me that he cycled from Wakefield to the Scarborough house to watch cricket from one of their bedroom windows as it overlooked the cricket ground.

Anyway, back to the little cross and Hartlepool.

Who made the cross and why is this unknown but the story of the bombing and the impact it had on the area is documented.

On the 16th of December 1914, roundabout breakfast time 130 people were either killed or injured in forty horrific minutes when it is reported that over 1000 shells were directed at the town from a German warship. During the same day, Whitby and Scarborough were also the targets of enemy warships. As I’ve said, I knew about Scarborough during the 1939-1945 war but, in 1914, that was all new!

In 2020 found in a box of broken cameras and lenses was a short newsreel showing the aftermath of the bombardment and photographs taken at the time showing the damage and the people of Hartlepool getting on with their lives.

The Newsreel on the Yorkshire Film Archive