During the night the 1911 was taken, 14-year-old William Spence Kerr lived at 2 Old Town, Keith. Also in the house was his father, Alexander, the caretaker of the local cemetery; his mother, Jessie who worked as a baker. William, who worked in the local grocers had three siblings – Charles, Winifred and George, the youngest aged just two.

In 1915 William was serving in the Gordon Highlanders after enlisting in Keith. His Medal Card has information about William being awarded the 1915 Star. He entered the regiment with the rank of private and service number 1661/6, which was amended to 266003 later during his service. 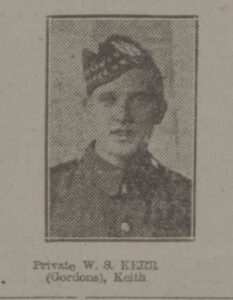 William served in the 1/6th (Banff and Donside) Battalion Territorial Force. In early August 1914, the regiment was stationed at Keith, then moved south to Bedford. After transferring to the 7th Division, the mostly young soldiers took part in various actions on the Western Front, including in December the Christmas Truce.

In 1915 the Gordon Highlanders took part in the battles of Neuve Capelle, Aubers, the Second action of Givenchy, Loos before being moved to defend the communication lines. In 1916 they saw more action on the Western Front after being transferred to the 51st Division, including High Wood and Ancre. The division was becoming a force to be reckoned with and was handed more difficult assignments, including assaults on Arras throughout the year and in November the assault on Cambrai. By 1918 the division was well below strength due to their huge losses in 1917. The 51st, low in numbers managed to hold back the enemy as the front moved back and forth. 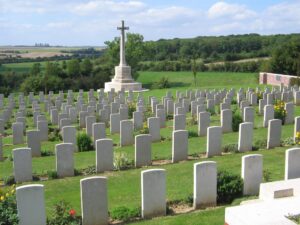 William, however, never had the chance to see the end of the war as he died of wounds on the 17th of February 1917 around Arras. He rests in Maroeul British Cemetery, about 6km northwest of Arras, between Houdain and Aubigny. The cemetery begun by the 51st (Highland) Division, was in Arras from March 1916. Almost half of the graves are those of the Highlanders. The London Territorials also have a number of soldiers buried there. Over 25 officers and men of the Royal Engineers who died in a mine explosion. All in all the cemetery contains 563 Commonwealth graves from the First World War and 11 German soldiers who also lost their lives during this time.

Back to William. In March 1917 his death is recorded in a local newspaper, followed by his obituary in August. By 1920 his mother had been awarded all monies due from the Army. 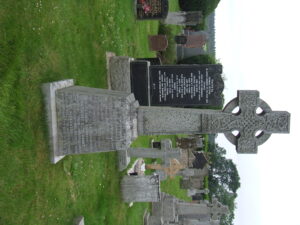 In the small Catholic cemetery of St Ninian’s, Braes of Enzie stands the Kerr family headstone.