A friend of ours/mine is a songwriter and musician, basing many of his songs around his Northumberland origins.  A few years ago I blogged about a mining disaster that was the basis of a wonderful and moving song and a song dedicated to my husband called ‘The Old Chateau’. 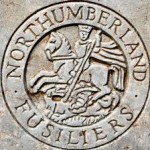 Anyway, the moving lyrics have once again spurred me into putting fingers to keyboard, but this time based on a postcard written by a fusilier to ‘his Maggie’.  I have no idea who the writer was or who ‘his Maggie ‘ was but I have found a Northumberland Fusilier who I shall blog about!

Frederick Noel Coates – who was he, just picked out at random from Army Service Records, basically as I thought his name would be easy to follow.

Frederick was born in 1895, in Whitley Bay, Northumberland, the son of John Robson Coates and Edith Annie, his wife of 19 years.

On Sunday 2nd April 1911 the family were living at 39 Victoria Avenue, Whitley Bay.  John was classed as an Accountant, while Edith  was given no occupation, but it did give information that she had born 6 children – the eldest being Edith Vera aged 18 and the youngest was Gwendoline aged 7 months.  Frederick Noel was the eldest boy aged 16 and employed as a Commercial Clerk.  The family were looked after by 2 teenage servants.

Ten years previous in 1901, John was an accountant working for the Water Gas Company with his family living at 37 Victoria Avenue.

A few short years after the census Frederick Noel Coates on 10 September  1914 signed his Short Service Attestation Papers in Newcastle upon Tyne.

Our young man gave his age as 19 years and 259 days and employed as a Wireless Telegraphy Student and was now officially a Private in the 16th Bn., Northumberland Fusiliers.  The only other entry on ‘Statement of Service was dated 18 September 1915, but will mention that later.

His military history sheet is bare apart from the information regarding his next of kin – John Robson (surname missing , probably as we know the name of the family) 8 South Parade, Whitley Bay.  One thing that was not missing was his description – a wonderful find for any family member who has no photograph to view.  Frederick was, as we know, 19 years and 259 days old.  He was 5” 7 1/2 “ tall and weighed 121lbs.  He had a girth of 35” with an expansion range of 4”.  His complexion was fresh, he had blue eyes and fair hair and gave no religious preference and he was declared fit for duty.

You may be wondering why I wanted to come back to Fredrerick’s Statement of Service, well on the 18September  1915 he was Discharged, but for a very good reason – he was Gazetted a Commission and became Temp. Second Lieutenant.

Frederick changed Battalions and was now in the 22nd.  These Battalions were made up of ‘Pals Battalions’ and took part in many battles including 1 July 1916, the first day of the Battle of the Somme – the 22nd Bn., lost over 530 men on that day.

The  22nd was formed in Newcastle on 5 November 1914 by Newcastle’s Lord Mayor and landed in France in January of 1916.

John and Annie Coates lost their eldest son on 4 April 1917 aged 23.  He is remembered at FAUBOURG D’AMIENS CEMETERY, ARRAS with over 2640 other  known men and 10 who are Known only unto Their God. 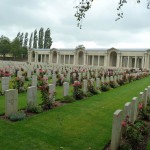 Frederick is mentioned in Whitley Seaside Chronicle of the Great War

As to who was the Maggie, dearly mentioned on the postcard that could well be another story, but I do hope that  her soldier did return home.

You can listen to A Fusilier’s Postcard here