Some of you that know me will be aware that I have a box that  has a lot of newspaper snippets and notes all ready for the day when I will get around to telling the world their story. I also have a folder in my email and a file on my laptop that has something similar, but sometimes the donor of photographs after being saved to the laptop gets separated and I am unable to acknowledge the sender or owner of the photographs…………yes, I know, but none of us are perfect!

A while ago I was sent a set of three pictures – one was of an envelope, and the other two were pages of a letter.

The letter, by a little ragged, was franked and had two one penny stamps on the top right hand corner. It was not written in a style I would have thought was used in that time but a style that was more rounded and with rounded loops on the high letters. The envelope was addressed to Nurse Howell, The Asylum, Wakefield – followed by a full stop and a confidently underscored stroke. I will leave Nurse Howell for a while and concentrate on the sender, one Elizabeth Rudd.

Elizabeth Rudd on the top right of her letter gave her address as 32, Westcliffe Terrace, Harrogate and dated it March 5th 1916. Who was Elizabeth and why was she writing to Nurse Howell?

To find who Elizabeth was we have to pry into her life by reading her words of thanks. Elizabeth was thanking Nurse Howell for looking after her sister during her last hours of life, which as she says ‘I did not know the end was quit so near….’ The nurse was thanked for her kindness for being at her patients side while her sister was not. But Elizabeth was glad that the nurse had been spared any painful suffering – Elizabeth’s sister having a peaceful end. Elizabeth went on to say that Nurse Howell was doing ‘noble work, one which required much patience and endurance…..’

Firstly, Elizabeth. We know where she lived in 1916, so a look at the 1911 gave an Elizabeth Rudd living at 81 Skipton Road, Harrogate, who was 28 years old and working as a draper’s clerk. Her parents were John William Rudd, a joiner and Mary Ann, and five other children in the house. Elizabeth had one sister, Maud Mary aged 23 – could this be the sister whose life had ended with Nurse Howell by her bedside?

Back in time 10 years to 1901 the family have now swelled their ranks and are living at 4 possibly Ashworth or Charlesworth Place, Harrogate. But there are still no clues as to the missing sister.

Back to the drawing board and a cleared Ancestry. I have set up the quick links and one of the links is directly into the UK Collections, but could not find the collection I wanted. So back to the home page and ‘see all new records’ Bingo, there it was, the UK, Lunacy Patients Admission Registers, 1846 1912. My main fear was that the date of the letter was just four years after the collection date, but hey-ho, in for a penny!

I did not know Elizabeth’s sisters name therefore a general search for Rudd and Wakefield. One entry stuck out and that was for a young lady called Hannah Jane Rudd. Hannah had been admitted on the 16th of September to the W. Yorks Asylum with no year given at the top of the page and no years on the previous pages, but her date of discharge of death on 14th February 1916, does seem to lend itself to being the lady we need.

The Rudd family in 1891 were living off Grove Road, Harrogate. John William was a joiner and builder and there was a Jane A Rudd, in the house. Could this be our Hannah Jane, who was three years older than Elizabeth?

Do you know any different?

Nurse Howell, now this could be a little trickier! Presuming, a thing I know you should never do, but where needs must…………as a nurse I presume she would have been a mature person, so over 21. I know during 1916 she was working in the Asylum, and possibly living in the Wakefield area. But, was Nurse Howell, 21ish in 1916 or older?

Back again to the 1911 census and a very, very broad search for Howell, Wakefield and female………and more ladies to search through than I cared for. I selected the search to about 1870 to 1895. I hate the new search on Ancestry, the searching does not hold the same ‘chase effect’ that it used to, but we got there after what seemed like an age – I could have made a Christmas cake quicker, or it felt that way!

One entry out of all of them stood out! Harriet Margaret Howell, aged 21, giving her year of birth around 1890. She was born at Bowes Park, Middlesex but was living in Seacroft

and her occupation was Hospital Nurse. Harriet was one of many nurses and ancillary staff working at Leeds City Hospitals for Infectious Diseases, Seacroft, Leeds, Mr A E Pearson, MRCS, Medical Superintendent was in charge. The hospital cared for patients with scarlet fever and diphtheria and provided care for 482. When the need for isolation hospitals lessened Seacroft was changed to a children’s hospital.

Harriet  must have moved to work in the Asylum by 1915/16 to have nursed Miss Rudd. 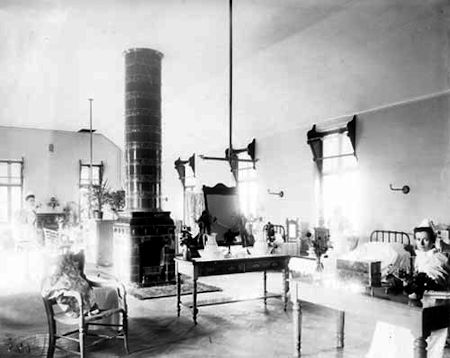 Is the Nurse Howell I am looking for or do you know better!

Every day more record sets are added to online family history websites – mainly the pay per view sites.  Gone are the days of having to go to a specific town to visit a church who still held their own records or an archives – well that is unless you want to!

I have just clicked on Find My Past to see what is new there and here are a few of their newbies – some may be of interest and help you with your research.

South Yorkshire Asylum Admission Records 1872 – 1910, later known as Middlewood Hospital and contains over 17,000 records.  The information revealed not only gives names and dates of admission but some records give details of the persons insanity and if they recovered or not.

Sheffield Cathedral Church of St Peter and Paul burial index 1767 – 1812 – these records contain over 44,000 transcripts from the registers with the information including:- deceased’s name, date of burial, occupation and next of kin.  The next of kin is wonderful when trying to work out if a person is yours or not.

Still in South Yorkshire, the Sheffield Quarter Sessions 1880 – 1912. The transcript gives details of the person being tried and their offences and of course, the sentence.

So, looks like there may be something of interest for a lot of people, especially as the 2 sites mentioned may have some offers going around this time of year.