What a wonderful way to learn about capsules of time – through a wardrobe, or should I say what is kept in a wardrobe.  But Lucy Adlington has a unique, informative and enjoyable way of bringing history alive through her History Wardrobe talks.

A friend of mine has known Lucy for many years, becoming friends by attending  one of Lucy’s talks and asking questions afterwards.  Talk, does not seem the right word as the events are more than that – more like a walk through a period of time with the audience being a friend or someone to have a conversation and a joke with. 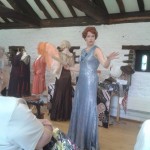 I met Lucy earlier this year when my friend suggested I go to one of her events – that didn’t go to plan as the traffic was terrible and I arrived a little late. Lucy had started and  was all decked out (ouch!) in her finery as a first class passenger on the Titanic with her ‘husband’.

The changing of costumes during a day onboard the Titanic was wonderful, interspersed with jovial banter from the pair and was a delight – just like being party to their private jokes.  Then sadly the news of the iceberg reached the passengers and we follow the couple as they tell what happened to them – I won’t give away who their characters are as that would give away the ending!!

I next saw History Wardrobe when Lucy was in Agatha Christie mode during the 1920’s onwards and with the help of Merry wore some wonderful and original costumes from morning attire, day wear to an evening dress that would not be out of place on the red carpet today.  The duo worked off each other with quips and remarks flying fast and furious. 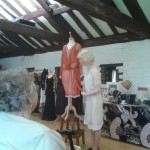 But seriously, the costumes together with snippets of Agatha’s novels went down a treat.  As with most of Lucy’s talks there are extra costumes on mannikins and memorabilia from the  period.

My latest show was ‘A woman of a certain age’, about Jane Austen and women in various times of there life in Jane’s  novels – the girl, the spinster, the married woman, the dowager, the widow and the ‘lady of a certain age’.  The costume worn by Lucy was simple but very striking.  Lucy de-constructed the dress, which in some places was held together with pins.  Hats were worn, flouncy capes worn, sections of Jane’s novels were read as examples of the times in a woman’s   life. An enjoyable time was had by all and many in the audience have been to more than one talk.

So, who is this lady that travels the country doing what women like doing – dressing up and talking?  Lucy is a graduate of both Cambridge and York Universities with degrees in English and Medieval Studies. 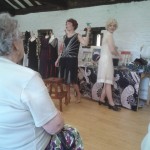 She has run workshops, given presentations and with her hands-on approach  is always in demand.  As well as all this Lucy is an accomplished author of childrens and young adult books.

A full diary of events can be found on the History Wardrobe website, so where ever you are in the country you will be able to see an event……………BUT !!!  keep it a secret, as I want to be able to get a seat!!!