I started my family history nearly 30 years ago.  I had no grandparents and only one parent.  After my Scottish grandfathers death that side of the family seemed to drift off a little – as families do when the hub goes away.  That has, I am very pleased to say been rectified.

But, back locally, my grandmothers maiden name was Agnes Siddle and she married Ernest Wilkinson.  My aunt was born in 1907 before grannies marriage to Ernest.  I remember asking her as a child ‘why does daddy have a different name to you?’  I was told that grandma married twice – a plausible answer and as a youngster it shut me up.  Oh, aunty, if you knew what I knew now!!!!

While looking though Ancestry for any trace of my great uncles military service – 4 of my grandma’s brothers fought in the Great War, with 3 coming home again to their family, I kept coming across this young man – Tedbah Siddle.  Who is he ? And does he link into my Siddle line?  Tedbah can sometimes be found with the spelling, Tedbak and Tedbor.

Anyway, who is he?

Well, I know he has a service record, so I’ll come back to that later but starting with the census, 1911 as I know he served in WW1 and that’s the nearest census to that milestone in his life.

The 1911 census has Tedbah aged 28, being born in Heckmondwike, a worsted spinner, living with his mother and 4 siblings at Walker St, Littletown, Liversedge.  Tedban’s mother was either very formal or chose to be a rebel as she wrote in red and her entry reads:- Mrs Siddle, head, aged 50, married 29 years, 10 children with 8 surviving to the census, works at home and was born in Gildersome.  But she signed Mrs E A Siddle – a small clue there.

Tedbor Siddle, according to Freebmd was registered in Dewsbury in the September Quarter of 1881 and this was confirmed by looking at the GRO Indexes.

Back to the census – I thought Tedbor or the variations in his name would be the stumbling block in this trail.  I searched the census for all the ways his name had been found – Tedbor, Tecbak and Tedbah and still none of his family could be found.  A search for his mother would be very long and hard as all I had found in the 1911 census was her as Mrs E A Siddle.  A sibling, that would be the way to go, try and find one of Tedbor’s siblings who was a similar age and hopefully pick up the man himself.

One of Tedbor’s siblings, Amanda was born in 1892, therefore she should be in the 1901 census.  Amanda Siddle born 1892 +/- 5 years found nothing.  So in for the long haul – a search for an Amanda born around 1892 in Yorkshire that could take time.  But, not as hard as I thought just around 460 entries and I quickly started at the last page and worked back, came to the s’s and there she was Amanda Siddal and I thought Tedbor would be the stumbling block.  So 1901 who were this family and were was Tedbor.   Well, Mrs Siddal was there and her name was Emma, she was aged 40 and a cloth weaver born in Gildersome.  Tedbor was there now entered as Ted aged 18 and a woollen twister.  There was a Jane aged 16 and a worsted spinner.  Alonzo aged 13 also a worsted spinner.  Robert aged 7 ; Ada 5 ; Norah 3 and Amanda aged 9 – no idea why she is out of age order.  But where is Mr Siddal as Emma states she was married.  Back another 10 years to find out as he must have been around within the last 3 years at least – well according to the ages of the children !

What I find in the 1891 census, I did not expect.  We have Emma A Siddal, giving her status as mother, aged 30 and still a cloth weaver.  We have Clara E Haigh, daughter aged 11 a scholar born in Dewsbury. There is, what looks like, Delert Siddal (our 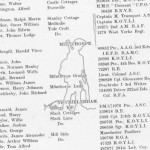 Tedbor) aged 8. Jane A is there aged 6, along with Alonzo C aged 3 and Olive C aged 1.  But, as the head of the household is one Joseph Crawshaw aged 40 a warp dresser born in Dewsbury.

Tedbah Siddle was in a marriage entry for the December Quarter of 1911 in North Bierley to Gertrude Wooller the exact date being 11 December 1911.

Back to the service record, where I initially found Tedbah – There are four entries for Tedbah with the first being dated 1905 when he is Attesting for the Militia or Reserve Div.,   He  joined the 3rd West Riding Regt., no. 14948.  He was single and aged 22 years 6 months and a millhand – all this we know from census and birth entries.  He said that he had served/ was a currently serving with the Volunteers 1st Bn W R Regt., and that he had purchased his discharge.  Further paperwork goes on to bring him more to life – he was 5′ 3″ tall, weighing 113lbs, with a fresh complexion, brown eyes and hair and worshipped within the Church of England and had no distinguishing marks. The Army Recruiting Office wrote to the local police to enquire about Tedbah, the reply came back that they knew him to be of good character.  A reference from Joseph Armitage, Manager stated that he had know Tedbah for over 12 years and last saw him 3-4 days ago (from date of signing Jan 13 1905) – Joseph commented that Tedbah was sober, honest and respectable.  Tedbah attending various training sessions.

In 1913 he re-enlisted after notice, by now he was a married man, his writing had become a more confident hand.  He was part of the B.E.F and rose through the ranks becoming a  Company Sgt., Major.  He ceased to be a CSM when he was transferred to the Heavy Branch – M.G.C and now his army number changes to  7870644.  He was wounded  and a letter from Mrs G Siddle of 4 New Brighton, Oakenshaw, Bradford dated July 14th 1921 asks  if she could be supplied with the following information.

644 Sgt T Siddle MGC yet demobilised or is he yet serving in the H M Forces.  He has been in India for the last two years (or there abouts) and is at present in this district, and is reported to be on six months leave prior to been transferred to South Africa.  I was given to understand that in July 1919 he had re-enlsited for a period of four years.  I am his lawful wife and am curious to get correct information on the matter and herby appeal to you for such. Thanking you in antisipation for an early reply.  I am Sirs, yours truly, Mrs G Siddle”

A reference in his army records gives the answer to Mrs Siddles question.  A margin note for Tedbak said that he was placed on the married establishment list, in view of the fact that he is separated from his wife by mutual consent.  There was a type written reference to this by his Commanding Officer, basically saying that as he had entered a status of married on the Attestation that had stood as there had been no update to this saying he was now separated.  The regarding his marital status would be altered and that ‘the soldier’ would proceed to Deolali enroute to the UK.

Note – Deolali – a town in India where the Deolali transit camp was based.  It was known for being an unpleasant environment and boredom and many soldiers with psychological problems pass through its portals – hence the terms ‘gone doolally’ and ‘doolally tap’ – terms for someone who  has ‘lost their mind’ possibly due to the stresses of war.  In Urdu the word tap meals a malarial fever.

One part of his service records was an award for the D.C.M. and he should be presented with such in accordance with the Northern Command Authority.  His citation reads “For conspicuous gallantry and resource at Ypres on the 20.3.1915 when he held on to a position with his section, although the trench was destroyed by the enemy;s shell fire, throughout the day until relief arrived.  During the defence of his post he managed to take back a report to his company, from whic

h he was cut off, under heavy shell fire, and then returned to his section. He was wounded during the day. “ This report answers an earlier entry in his records.

Further information gives information that Mrs Siddle was requesting that her husband acknowledge that he is the father of at least one child, a child that will come into the world very soon. He acknowledge two children, Gladys Irene born 15 April 1912 and Mabel born 12 October 1916 (Mabel is the unborn child referred to)

I’ve done a potted history of Tedbor and his siblings, found out his mother’s name and eventually his father’s.  But I still don’t know where his name comes from – is it a family name ? A search of Freebmd only lists one Tedbor and the Army Records, as we already know, shows up Tedbah, while the GRO gives a zero result.  I am no nearer to know where nor why he was given that name………………May be someone reading this knows !

Addendum – Cleckheaton Advertiser and Spen Valley Times Page 2 July 1st 1915 has an interview with Tedbah about his exploits – he was in line for a V.C. but received the D.C.M. instead.