What a fantastic day and well done to the organisers.  The day was nice and breezy outside but where I was on the Morleyfhg stand it was quite warm and sometimes a lack of a breeze made it a little overpowering – but saying that the group had a good day and promoted their new booklet, East Ardsley Monumental Inscriptions complete with the burial listings, so every grave has an entry regardless of whether there is a marker or not……..now isn’t that good, you can now find the plot without disturbing any of the church staff.

Morleyfhg seemed to be busy most of the day with people seeking us out to buy publications, ask questions or just a known face saying ‘hello’ – that is so nice.  I sold quite a few of my ‘Family History Diary’s’  both in the A4 and A5 formats and a few of the ‘Interview Diary’s’.  It was so nice that people who had bought them at previous events stopped by and said how useful they were with all the information you had at your fingertips and more important, you could see what was missing ! 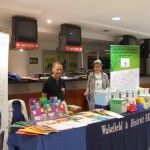 So who else was there, well next to us was another local group (with whom I also have a connection), Wakefield & D FHS, who also seemed to have a good day. Huddersfieldfhs was also present along with many other local societies.  There were also many businesses selling maps, old and new books, family tree items, family tree printing and transcriptions.  There was also a company that I have had a connection with for many years – Parish Chest and are a lovely couple – you will probably seen them at your local event.  There company is for want of a better explanation a ‘shopping centre’ for all your family history needs.

One of the stands opposite Morleyfhg was FINDMYPAST who were such a friendly bunch of people, always helpful and smiling.  They were promoting their website and offering tips on how to get the most of your searches.  They also had a competition which I entered, won’t win but went through the process of entering.  It was nice to meet you all. 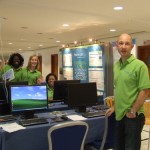 Around the corner from us was Ancestry, they were a little late setting up and when I snapped them first time were not ready at all to be photographed, but I did anyway!  When I caught them later they were in full swing. 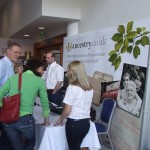 Upstairs there was The Western Front Association, The Metcalfe Society and more, then up onto the next floor to find Family Search, the website of the LDS Church again, a very friendly, helpful and smiley bunch and willing to take time from setting up to ‘pose’ for a snapshot.  Oh ! if you need to know anything about a regiment, battle or uniform contact the Western Front Association, or better still become a member, they are very helpful and nice and it’s not just a man thing, there are lots of women members too.  Go along to one of their meetings as a guest and see!

Well a good day seemed to be had, but we did think that numbers were down a little from last year, but that did not dampen our spirits or the enjoyment of a good day had by all