Life on the Home Front Weekend

An event organised by Doncaster MDC, under the ‘Doncaster 1914-1918 At Home, At War‘ umbrella and funded by the Lottery Heritage Fund.

The organising group are are pleased to announce this, the biggest event in the area of this summer, and with FREE entry, and FREE activities it looks like it could be a wonderful day out for all members of the family. 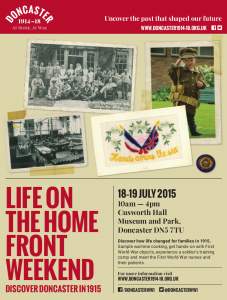 Life on the Home Front Weekend

The front lawn at Cusworth Hall will be taken over with a huge range of activities, including:

The timings for the events at Cusworth are still being finalised so keep checking in on their website,  facebook page and their Twitter link – have a good time!

This event is one of a series entitled ‘The Great War on Tour’, which visits a variety of places including St Oswald’s Church, Kirk Sandall on the 20th of June ; Edlington Library on the 22 of June and ‘Doncaster at War 1914-1915’ again at Edlington Library on 29th of May through to 25th of June.

We recently published an article by Guest Blogger, Philip L Wheeler, who wrote about Drighlington ‘pub lads ‘ who gave their lives during WWI.  Well I am pleased to say that Philip, with three others has written a book about the lads from Batley Grammar School, who died in the Great War 1914 – 1918, with the support of the National Lottery, Heritage Lottery Fund. 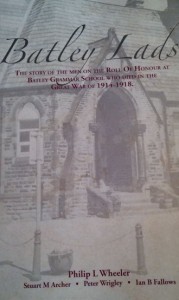 The paperback book, A4 in size contains over 300 pages. Before you visit the pages of the young men, you are invited to become familiar with life in Edwardian Batley and Batley Grammar School at the time leading up to 1914 enlistment and the period when the ‘old boys’ started to enlist.

You are then introduced to the 61 fallen boys and one headmaster from the school who paid the ultimate sacrifice, by a full colour page bearing their rank and name, lifespan and regiment, with at least one image per entry. Each of these pages has a selection from a poem or prose for example:-

“Earth has waited for them, All the time of their growth Fretting for their decay: Now she has them at last! In the strength of their strength suspended—-stopped and held.” Isaac Rosenberg 1917.

The book is easy to read, and is overflowing with information about the men and their families; what was happening during their war and where they now rest.   One of the men mentioned and highlighted on the back cover is Private Horace Waller, V.C., born in 1896, he served in the KOYLI 10th Batt.  Horace died on the 10th of April 1917 aged 20 from wounds received while throwing bombs at the enemy.  It was a result of these actions and actions earlier in the day that he was awarded The Victoria Cross.  Another young man was Corporal Gilbert Pattison, who served in the Royal Flying Corps.

The Epilogue, goes on to tell how the school and other schools continued after the war and bringing the school to the future, hoping that the current pupils will visit the cemeteries of their fallen.

Finally, there are the resources and index.

If you would like a copy of this very informative book please email :  info@projectbugle.org.uk

Just over  a month ago I was given a framed picture, I say picture, as it is not truly a memorial.  Anyway, this picture was for a soldier who served in the King’s Own Yorkshire Light Infantry during WW1.

It would have been quite colourful, with its curled horn with a central white rose surrounded by a horse shoe shaped wreath containing the Battle Honours of the Regiment.

The framed picture must have been on a family wall for many years as the soldiers number, rank and name are very faint and I do mean faint.

Armed with a good source of light, magnifying glass, large cup of tea and a couple of tried and trusted websites I set off on my quest.

The first two numbers and the last few numbers were easy to read, it was the ones in the middle that were the problem.  His regiment was clear, he was  a Private.  His initial was clear, an old fashioned L, you know the one, similar to a £ sign.  His name, well, I decided on M for the first letter, with a L in the middle.  Variations of the names first few letters went on for a while, varying from Mc, Ma, Me and Mo.

As you can guess one of my favourite websites was getting well and truly used and I was certainly making my subscription work.  The eyes of a neighbour and fellow family historian were also called upon and she achieved the same as me.

One thing that we both felt certain about was that he did not die as the CWGC and SWDTGW have no match for any permutation of his army number.

The frame was put on my desk and left in view, but it was certainly not forgotten.  Where else could I look? What else could I do? He was an army man.  He may not have volunteered but he was called to Serve King and Country in some way but where? Who would know the regiment better than the Regimental Museum?  The KOYLI museum is housed within Doncaster Museum, being moved from The Barracks at Pontefract.  I ‘phoned, spoke to a nice man who told me he would get someone to call me back as the person who I needed to speak to was on his holidays.  I didn’t have to wait long and Steve rang – I gave him the numbers, rank and what I thought was his name.  He’d ring me back.

Guess what ?  He rang and came up with the same as me – no trace of our man.  He did however, suggest that I go over and take the picture to the Museum, so that he could possibly, shed light on the matter.  Believe you me, it needs a lot of light !

Today was the day I ventured to South Yorkshire, that OK as it was once part of the West Riding before all that reorganisation stuff in the 1970’s.  The Museum is a nice place with nice helpful staff,  but parking is ‘iffy’ as you need a voucher from reception to say you are in the library and you need to sign in but that’s not a problem, but the car park is smallish.

Anyway, Steve looked at the picture and went on the web.  He put various variations of the army number into websites and the numbers came up but with nothing matching the Regiment of anything that even on a good day you could say was his name.

Steve, who works for the library, changes his ‘hat’ and does work for the KOYLI Museum one day a week  and he told me that he thought ‘our man’ did serve, we know that, but that he could have served and done his duty only in the UK and therefore would not get a medal.

What have we come up with in the past weeks :-

We know ‘our man’ served in the King’s Own Yorkshire Light Infantry.

We know his rank.

We know his initial

We know that WW1 service records were damaged by the enemy in WW2 and are called ‘The Burnt Records’ for that very reason.  Some were partially  burnt,  some have water damage and others were totally destroyd.

We know that he survived the war.

We seem to know quite a lot don’t we?  But the important segments still remain a mystery.

What is his true army number?

What is his name? The surname that seems to start with an ‘M’.

Who does he belong to?

I think that this picture will be picked up and put down on my more occasions before I get totally exhausted from searching.

My thanks to Steve for his time and help and the fact that he like me, will keep looking.