Over the past week or so I seem to have gone into blogging overdrive – well I have had a gap of over 12 months due to technical problems.  So, I am back with vengeance, as they say!

Those of you who visit my pages on a regular basis, will know that I like to tell you of resources to help with your research, news about places and updates to my website plus the odd mystery that has diverted me from my original path.

I think this bit of information will come under the heading of ‘help with your research’.  A few days ago someone sent a message around about Prisoners of WW1 record cards being put online by the International Committee of the Red Cross, and what a good source of information that is.

I think most people will be like me when a name search is placed directly in their view – yes, I go through most of the main surnames I am researching, well what did you expect me to say!   Siddle, no matches ; Wilkinson, too many ; Riach, not many.  Looks like Riach it is.

But before I tell you about soldier Riach, a little bit of background.   During the Great War 10 million, yes 10 million, sounds a lot dosn’t it? More than I imagined.  These 10 million were servicemen and civilians who were captured and sent to detention camps.  The countries involved provided an index card for each prisoner or detainee and  5 million are available to search through. One must realise, that the ICRC has a great deal of extra information in French, as it is based in Switzerland.

Riach, was my search criteria, and a soldier named Walter H Riach turned up.

But what do his index cards tell? Walter was a Captain in the Cameron Highlanders. I saw his rank and thought to myself, that his service record won’t be online.  He was classed as wounded and missing on 23 March 1918. Words and references are F.S.E.  R.I.A E70738 with Z154 being struck through.  The card gives the impression that enquiries should be made to Berlin. Details of a Mrs Helen J W K Bakewell, of Forest End, Sandhurst, Berkshire are noted along with the fact he may be a Roman Catholic and that he was a prisoner, but with information that I now know the dates show the information was slow to be passed through.

If certain references are registered on the card it gives a link to other information available for that person – Walter has the relevant references. Another card tells that Walter Riach was a ‘soldat’ and had a reference of PA 28358 prefixed by a printed cross – possibly signifying a Red Cross reference.

Another card gives more references – A34209 with 27819 struck through.  We already know that Walter was wounded and missing since 23 March but now we know that it was between Fries and Equancourt – a look on a map tells me that Fries could be Fins.  We now have another name – Colonel Goff (cousin), Villa Valerie, Bellaria, La Tour, Vaud, Suisse.  the final page has another reference A400 with 30245 struck through.

As I said earlier there are reference that give access to more information and Walter had one, PA28358  which took me to a scanned book, typed and very faint but all in French.  The PA refers to British prisoners in the hands of Germany. The site has screen shots of what each reference means but sadly there was only one set of references for Walter so his information came to a halt here…………….but I wanted to find out what happened to him and more to the point who he was and who were Mrs Bakewell and Colonel Goff, his cousin.

Walter Hamilton Riach was the son of Arthur Hamilton Dundas Hamilton a Lieutenant Colonel in the Royal Engineers who served in India.  There are sources that say that Walter was born in Muree, India about 1897. This is getting very complicated as the more I search for the family the more I find peoples research differs and as this is not my Riach line, well not yet anyway, I am not going to get bogged down in others research, therefore, I will focus on what is out there on original documents. One document I did find was the Roll of Honour of The Imperial Service College which tells that during 1912-1914 Walter was there.

Ancestry has the medal card for Walter which tells what we know already – his name, ranks, that he was eligible for the 1915 Star etc. That he served in France from 30 September 1915 and his date of death.  Yes, Walter died his wounds while a prisoner of war on 5 May 1918 aged 21.  Here is card is unusual as it has information on the reverse.  An application was made by Mrs C H Holmes on behalf of her late nephew Capt., Riach W H for his medals.  An address is given as Rosevale, Newton Abbot presumably for Walter and his fathers address is given as 44 Grange Road, Ealing, W5.

Now, as to who is Mrs Bakewell and Colonel Goff, shall we say that is my next adventure………..see you there!

The CWGC tells that  Walter served in the 5th Bn., of the Cameron Highlanders and that his father at the time information was given regarding his grave was 30 Mattock Lane, Ealing, London.  Additional documentation for the CWGC gives references to his plot and tells that a headstone had been erected, no. 324, with the design 1010/1C with a cross with the words ‘The pure in heart shall see God’ his father’s name is also listed with his address but without seeing the headstone I’m not sure if all the wording is included. 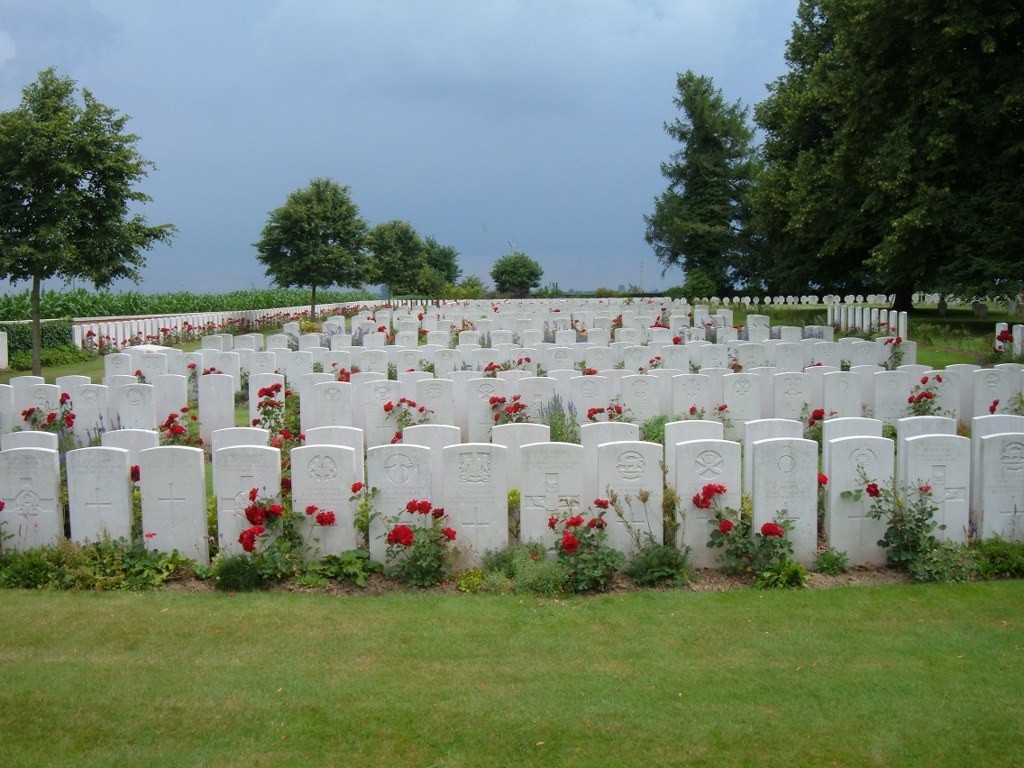 Walter rests in plot III F 4 in Le Cateau Military Cemetery, along with over 700 others who gave their lives for King and Country, of which 511 are identified.  The probate for Walter’s estate was granted on 13 August 1919 to Arthur Hamilton Dundas Riach, Lieutenant-Colonel R.E.. Effects £593 9s 7d.

The area had been in German hands since 1914 and Le Cateau had been the site of a German railhead and also the site of an important military hospital.  In 1916 the Germans laid out the cemetery and allocated separate sections for Commonwealth servicemen and German soldiers, of which over 5000 rest within its boundaries and 34 Russian servicemen .

There are three other people mentioned in this snippet, Arthur Hamilton Dundas Riach, Mrs Bakewell and Colonel Goff, a cousin.  Who they are will have to be another story……………so see you soon!

International Committee for the Red Cross