London during the plague saw over 15% of the population wiped out with the two year period – 1656-1666.  The bodies had to go somewhere and hence, plague pits were dotted over the London area. 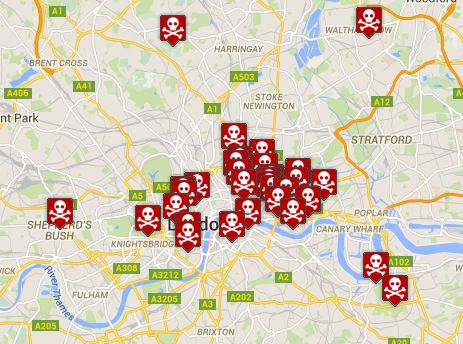 Plague pits all over London

Historic Uk, have made available an interactive map of London showing the reputed Plague Pits. Gathered from various sources with a pop-up information box for each skull and crossbones link.

The burials places include :- Vincent Square; St Giles in the Fields, where the church’s own site gives information about the deaths; Pitfield Lane, Hoxton, was once home to a large plague pit; Queen’s Wood, Highgate; Knightsbridge Green; Bakerloo Line and Cross Bones Graveyard – known as the unconsecrated memorial to thousands of prostitutes who lived, worked and died in the area.  The pit was used during the height of The Great Plague.

History UK, say that although there is little evidence of the exact locations of the plague pits, this information is based on various sources and is an on-going project, and as such they are always willing for information on any other sites in the area.