I wrote a short article about this resource a few years ago, so I thought I would give you all a chance to have a look.

A jointly funded project, Bomb Sight, has been created to map the London WW2 bomb census between 7 October 1940 and 6 June 1941, which had previously only been available at the National Archives. 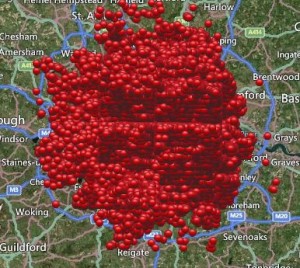 Visitors to the sight can explore the map by dragging, section by section which can be quite hard to find your way around due to the very large number of red circles – just shows how Londoners suffered, or enter a street or area.  By clicking on one of the circles you can see what type of bomb hit the area.  The read more section can sometimes give a lot more details i.e. current address, people’s memories and sometimes photographs

Take for example one of Londons tourist attractions, Buckingham Palace, within the period covered by the census over 25 bombs fell within the boundary of the palace or very close. The Tower of London and Tower Bridge also feared no better with over 15 bombs landing close.

Taking a look at the map, so that you can see all of the London are, it seems there was no peace for anyone inside the M25, even up to St Albans, Hatfield and Hoddesdon.

Why not grab yourself a cuppa, take five minutes and explore.  It does not matter if you have family from the London area or not – I guarantee you will spend more time there than you planned.

Aberdeen was bombed during WW2 for three years.  This devastated those living and working in the area.

In 1943, according to the Press and Journal, was the deadliest attack killing nearly 100 people and injuring many.

At one time in the air 10 Luftwaffe Dornier 217 bombers circled the district, then swooped low, dropping bombs with no regard life or limb.  Killing, maiming from a distance and leaving panic and trauma in its wake.

The city saw its last raid in 1943 but had seen 141 others that were classed as minor.

Now an interactive map has been developed to show where and when the bombs fell and if your families life was impacted by these events.