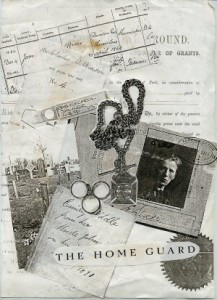 We research for various reasons – to research our family history; to research a soldier, a battle or a war; to research a building or local area.  Our focus may differ but we have one thing in common – we need material to research.    Too many researchers means only one thing – the original documents get damaged, and many of them were in a delicate state before we started to research.

If the originals become too damaged they could end up being lost for the future and that is not what we want.  As you know family history associations, military groups and local history groups have, over the years been tackling this problem by painstakingly transcribing original documents.   There are many of these associations and groups that take time with their transcripts and have various checking procedures in place, but is still always good practice to have a look at the original document, if at all possible.

With today’s technology at our fingertips, looking at the original could just mean logging on to a couple of websites and viewing a scanned version of the original document to confirm or discard your theories.  As we know the original paperwork on these websites have been transcribed for an index – and these indexes have many flaws. By just looking at the scanned versions an obvious name or place can be seen but totally differs from what has been indexed.

None of us are perfect and we all know that sometimes we see what is not there.  Many years ago I photographed a CWGC memorial for a friend – her relative was commemorated there.  When I sent over the picture she noticed the surname was incorrectly spelt.  After communicating with the CWGC, this was rectified.

I think the following lighthearted snipped about a young monk says it all!

What the young monk found!

A young monk was assigned to help other monks copy out the old canons and laws of the church by hand. On his very first day he noticed that all the monks were copying from copies, not from the original. So, the new monk went to the head abbot to question this. He pointed out that if someone had made even a small error in the first copy, it would never be picked up! In fact, that error would be continued in all of the subsequent copies.

The head monk said ‘We have been copying from the copies for centuries, but you make a good point, my son’. So he went down into the dark caves underneath the monastery where the original manuscript were held in a locked vault that had not been opened for hundreds of years. Hours went by and nobody saw the old abbot.

Take care while transcribing as it could mean a world of difference !!