A short while ago a friend sent me his pictures of Glen Lyon War Memorial.  He like many others, know I collect and transcribe them, and he kindly sent me a couple of pics taken on his adventures. 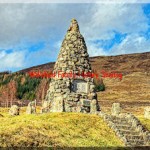 I can’t say what a beautiful place it is, as I don’t know, but from the picture it certainly looks a pleasant place and with the sun shining and a blue sky, even a cold day would be a pleasant day in Glen Lyon.  The glen is approx. 20 miles in length and stretches from Fortingall to Cashlie and from all accounts well worth a visit.

Who is mentioned on this very special memorial, special, you will see why shortly.  Firstly, and only because his name appears first on the memorial (all names are in rank order)  is Lieutenant Colonel John Robert Beech CMG, DSO who died in Lincolnshire while in command of his troops. Next on the list is Clyde, actually, Robert Clyde Beech, the 20 year old son of John Robert. Next comes Alan Tompson, a relative by marriage of John Robert’s wife, who was the widow of John Bullough or Meggernie Castle. Also on the memorial is Francis Cowie who was before the war was an asistant factor at the castle.  So all in all, the family from ‘the big house’ didn’t fair well from the war.

The last name I am mentioning in this ‘snippet’ is that of John Alexander McCallum of Camusvrachan, KIA in October of 1918 aged 23.  It was his father Alexander, who designed and built the Glen Lyon War Memorial.  What greater gift could a father give to his son, a splendid memorial built at the side of the road that all who pass by will see and hopefully more will now know of the great love and sadness with which it was built.